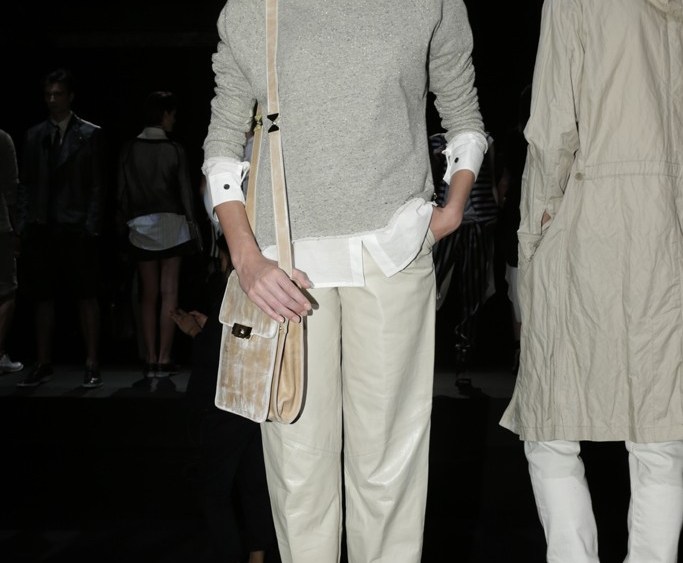 Kenneth Cole’s spring collection, to be shown tonight at New York’s Cedar Lake in a high-tech installation with 40 models on two elevated platforms, carries much significance for the designer. For starters, the clothes reach stores in a year that marks his 30th anniversary in business. They also come shortly after taking the company private last month and represent the first fruits of Cole’s collaboration with consulting creative director Kobi Halperin, who joined in June. Additionally, Cole plans to return to fashion week with a runway show in February, his first since spring 2006.

Clearly, there is a lot going at Kenneth Cole Productions Inc., but Cole is taking things in stride. “The goal has been to elevate slowly, methodically; to continue to be more relevant, and reintroduce ourselves to the Kenneth Cole woman, from the ankle up,” he said during a preview.

Spring is a major step in that direction. “It’s a little bit more feminine, a little warmer, more comfortable,” Cole said. “These clothes are meant to feel lived in, preserved and authentic.”

Many of the silhouettes are more languid than Cole’s typically stricter repertoire, and the influence of Halperin, previously the executive creative director at Elie Tahari, is evident in the North African and Middle Eastern touches — i.e., artisanal details like hand-painted studs on shirt collars, rich gold beading and embroidery — and plays on volume, transparency and layering. Looks include a formfitting miniskirt teamed with an elongated chiffon shirt, its hem peeking out beneath the skirt for a fluid touch, as well as reimagined motorcycle jackets, some in oversize proportions, another rendered with a tuxedo take.

The men’s offering has a similar sensibility: moto jackets with paint splatters, Bermuda shorts and jackets in coated linen, shirts and pants with hand-embroidery. Sweaters have been hand-painted, while drawstring pants and vests serve as layering pieces. The overall effect is at once urban and nomadic.

“It was interesting to think about movement on the body and play with proportion,” Halperin said. “We created something much more emotional.”

As for Cole, he didn’t mince words when defining the new direction: “I would not have been able to do a collection like this as a public company.”

Indeed, Cole seemed to welcome the recent development and the opportunity it represents for his company’s future. He said it was liberating to not be held accountable to report results every three months, and it allows the company to build its business in a “more realistic way.”

Perhaps that underscores his decision to return to fashion week next season, though this being Cole, he doesn’t plan to do it the traditional way. “The world is changing so much, the purpose of a runway has changed,” he said. “We’re thinking about it in a way that makes sense…how to make it more timely, more relevant.”

He’s keeping details mum, as he is for the anniversary festivities, which Cole said “are not all figured out. Principally, we will celebrate the anniversary to the industry in the spring and to the consumer in the fall. It will two-tiered, with events that incorporate the social side as well as fashion.” Among the plans is a book with Rizzoli about the 30-year journey — “Where we have been, where we are and where we are going,” he said.

“We built this business by doing things in an interesting way,” Cole added. “We’re always challenging ourselves to rethink the model — is this the way to do it?”

He then offered a prime example of such thinking: “Next year is the ninth anniversary of our 21st anniversary — 21 is a lot cooler than 30.”