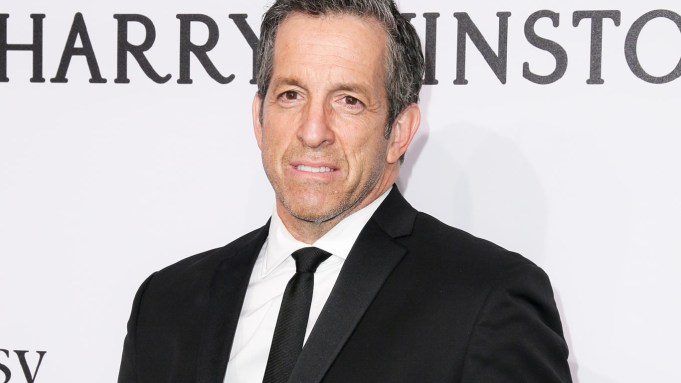 Kenneth Cole gave his brand a social conscience long before it was fashionable. Four years after he established Kenneth Cole Productions in 1982 as a footwear company, he made a major statement to support AIDS research with an iconic campaign/PSA shot by Annie Leibovitz featuring major models such as Christie Brinkley, Paulina Porizkova, Beverly Johnson, Andie MacDowell and young children with the tagline “For the future of our children…Support the American Foundation for AIDS Research. We do.”

Cole has been involved with amfAR ever since, becoming the organization’s chairman in 2004. AIDS and HIV remain one of his key causes, but others include homelessness — Cole is a founding board member of Help USA, chaired by his wife, Maria Cuomo Cole — and the rebuilding of Haiti following the devastating earthquake that hit in 2010.

In addition to fund-raising and on-the-ground efforts, Cole has famously brought awareness to these causes and others through his advertising campaigns. Some of his most memorable ads include 2005’s “We All Have AIDS” shot by Mark Seliger and featuring Nelson Mandela, Tom Hanks, Will Smith, Elizabeth Taylor, Sharon Stone, Alicia Keys and Elton John among others, and the 1992 campaign picturing a homeless man with the line “There are too many people who would love to be in your shoes.”

For these campaigns and many others, Cole is the recipient of the CFDA’s inaugural Swarovski Award for Positive Change. Technically, it’s a new award, but fun fact: Cole has something similar. Somewhere in his office there’s a Trova from 1996 for the Dom Perignon Award for Humanitarian Leadership.

WWD: You were really ahead of the curve in making social messaging core to your brand, and particularly when it came to AIDS. What clicked for you about the issue?

Kenneth Cole: Early on I was looking for a way to make what I was doing as meaningful as I could. How to speak to people about not just what was on the body, but what was on their minds…There was a pervasive consciousness that was sweeping this country in the Eighties. There were these initiatives that were called We Are The World, Hands Across America and older people will remember them.

WWD: I remember “We Are The World.”

K.C.: For the most part that was about hunger in Ethiopia, or in Africa, sub-Sahara. My thinking was there was this big, dark cloud that was looming over all of us. That nobody would talk about. It was HIV. Because of the pervasive stigma attached to anybody that [was HIV-positive]. AIDS was on everybody’s minds, but not on anybody’s lips. I couldn’t really understand at the time why not…I did a campaign. I reached out to Annie Leibovitz at the time. I asked Annie if she would help me do this. There really wasn’t such a thing as pro bono advertising in those days. The olden days. But Annie donated her time. And again, it was right after “We Are The World.” So there was kind of this sense of wanting to do something important. So we reached out to some of the biggest models at the time…

At the end of this, I looked at myself and all of a sudden everything just seemed more important. Seemed like what we were doing really, it just became important overnight. It changed the man. It changed the brand. It changed my associates. I think everybody felt better about what we were doing. We made it our mission and our purpose. For years I did all of that as far as branding and marketing. I think everybody here felt good about that in their communications.

WWD: How do you choose your causes?

WWD: We’re living in a very political era. A lot of brands have gotten in on social messaging. How do you stay relevant?

K.C.: We don’t really change. The messages, the platforms, the things we talk about are pretty much the same. The forum has changed. The medium has changed. But the general context really hasn’t changed. I accepted a position as a U.N. ambassador for AIDS, which was a privilege. It gives me an even bigger platform to pursue our path of finding a cure by 2020. And then ultimately ending the AIDS health crisis by 2030, which was their mandate that they put forth at the last what they call HLM meetings, Security Council Midwest.

Then we still do our Haiti and homeless stuff. It’s still what we’ve always done. We talk about a lot of the same issues, but in ways that we feel continue to be relevant. We did a campaign in, I wrote this down because I was thinking about it, in ’08, which was nine years ago. It was called “We all walk in different shoes.”

WWD: People are so PC. Did speaking out ever have a negative impact on your doing any of these?

K.C.: People often say, “Well, do you think it is politically appropriate?” or whatever. My answer has always been the messages are really not political. They’re social messages. They’re human messages. I may have strayed a little bit on occasion inadvertently. A lot of the issues we speak about have been politicized. I’ve talked about guns — I ran an ad about 1980, and ‘89 as well, I think, where it said something like, “We do not condone the right to bear arms or bare feet.” To try to make light of the fact that with an automatic weapon — which today are legal — there’s no rationale on any level for those. They’re made to kill as many people in the shortest period of time possible. There’s no rationale for them in civil society. So that’s the conversation that we started then, and we continued to engage it periodically.

WWD: You used to be a public company, now you’re a private company. How did all of the messaging go over when it was public?

K.C.: I was doing this before I went public. I made the statement very clear. “You bought the stock, you knew what you were buying.” This isn’t something we imposed upon our shareholders.

WWD: The messaging is such a large part of your brand identity, regardless of what your collection looks like. What do you think it would have been if you hadn’t gotten into this?

K.C.: I don’t know that it would have been different. I speak to a modern person. I always have…I basically have been that customer. I’ve created stuff for that guy who is me, and the female counterpart. Just modern, contemporary clothes. If I spent less time on our social stuff and more in fashion, whatever fashion is, would it be better? Maybe. It probably would have been a little bit better. But I still feel like at the end of the day what we bring to the market has more appeal than we would have otherwise. And I think customers appreciate the brand more.

WWD: Does the messaging in the campaigns ever become an albatross to always kind of be, on a message in such a way that’s creative and provocative? And are you ever like, “I just wish we could shoot some models on a seamless. Get a good photographer. Call it a day.”

K.C.: I don’t. I enjoy that. I love fashion, but I love kind of somehow contextualizing it in a way that’s unique to our brand. That’s what fashion is today. Content is ubiquitous. Design today is ubiquitous. The minute that any product appears anywhere, it’s available to anyone, anywhere. You can’t own it. It’s unfortunate. What you own is your brand. And the brand is unique to you. And the brand has a point of view. It has a point of difference. And to the degree that you can maintain that difference, then you have reason to exist.

WWD: What’s going on in the business? You just relaunched women’s.

K.C.: So we just launched, relaunched women’s wear. And again, it’s very intuitive, comfortable clothing. Women don’t empty their closets at the end of the season. So the goal now is, what are those great, comfortable, fun pieces that complement what you already own? That’s a lot of what the collection now is…The filter is wear-to-work wear. But it’s comfortable clothes that you can wear to work and look good in. As it is for men.

WWD: Were you always into social issues even before you got into fashion?

K.C.: I was, but probably not more than most people. I think I changed with the times. The first campaign I did was in the Eighties because everyone seemed to be emotionally inspired to engage. I realized that this was a good thing. I didn’t know for sure it was going to be good for business. But I knew in my heart it wasn’t going to be bad for business.