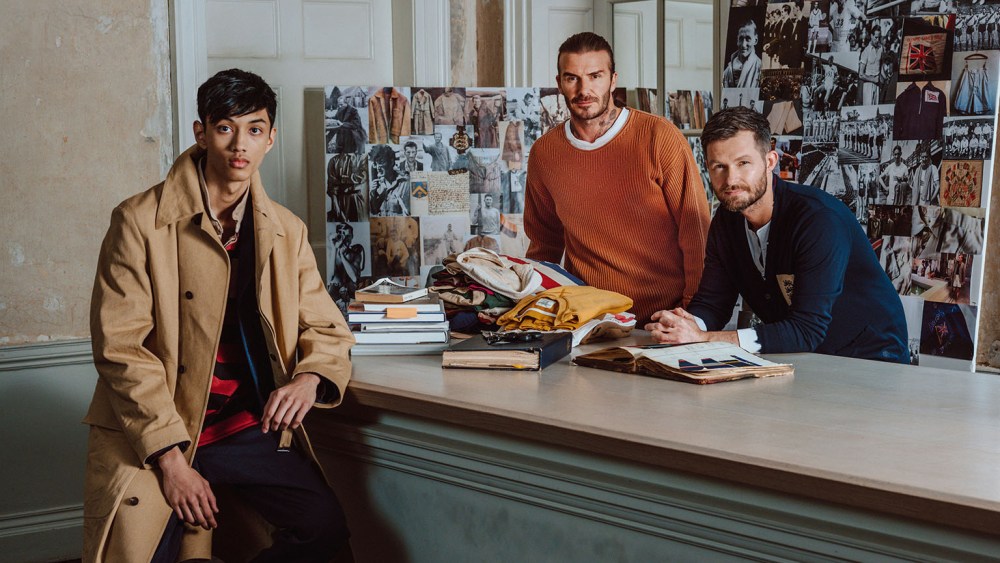 LONDON — Covent Garden is calling Kent & Curwen, the contemporary brand part-owned by David Beckham, which is planning to open its first new-generation shop on Floral Street, a fashion, beauty and retail haven not far from the famous covered market.

The 1,800-square-foot store, in a historic building at 12 Floral Street, has skylights and soaring ceilings and is set to open in September. On Sunday, the K&C team will give its London Fashion Week Men’s guests a taste of what’s to come: The brand’s spring 2018 presentation will take place at a nearby venue on Floral Street.

The Paris-based firm Architecture + Associés, which has worked on retail projects with brands such as Dior, Comme des Garçons, Viktor & Rolf and Diesel Black Gold, is designing the interiors, which K&C creative director Daniel Kearns said won’t be “too pastiche or too modern,” but rather inspired by British history, architecture and cultural references.

Principals see the store as the first big brand marquee, a statement about Kent & Curwen’s new, sportier and more collegiate direction, and a template for future retail units, shops-in-shop and other spaces as the brand expands worldwide.

The team has been working to telegraph its message in Asia in particular, where K&C — which is also partially owned by Hong Kong-based Trinity Ltd., part of Fung Retailing — has more than 100 stores and has traditionally attracted an older, tailored clothing customer. Kearns and Beckham are moving that image on, promoting the brand’s Britishness but offering up pieces that recall well-worn school, sports or military uniforms, with faded colors, ragged edges and a certain hand-me-down charm.

The British brand was founded in 1926 and has its roots in the manufacture of sports uniforms, for clubs, colleges and universities. Kent & Curwen pioneered the cricket sweater, and its archives are packed with regatta jackets, old Eton caps, v-neck knits and sturdy topcoats.

“We’ve done a few trips to Asia recently and we were in China a few weeks back. It’s interesting to see young kids who are 17 or 18 interested in the brand, but you also have an older generation — like myself — who have a massive interest. That’s where we are at the moment, and that’s exactly what we set our sights on,” said Beckham in a joint interview with Kearns.

The two are in the Hardy Amies town house on Savile Row — Trinity also owns that brand — surrounded by clothing rails and a new bag collection — sturdy waterproof cotton canvas backpacks, hunting style satchels and totes — that’s part of a collaboration with the specialty British company Brady. A sample scent being trialed for the first K&C Christmas candle sits in a glass bottle on a table alongside coffee and tea cups and bottles of water.

Like Beckham, Kearns recognizes the enthusiasm of the Chinese consumer. In Hong Kong recently, Kearns said he was dressing a mannequin at one of the stores “and I literally then had to undress it. The [look] was the last one that was in the shop and we sold it — and that’s exciting for us to see.”

Beckham, whose company Seven Global has invested in the brand and has a business partnership with Trinity, has been marketing it worldwide, hosting events and working closely with Kearns on the mood and feel of the collections. Beckham said the latest iteration of K&C is cutting across the generations in Britain, too. He said that following a recent shoot with David Bailey — it was the first time they worked together — “I sent him a couple of the rugby shirts and he loved them. On one side I’ve got Brooklyn [David and Victoria Beckham’s eldest child], who’s 18 years old, wearing the rugby shirts and then David Bailey who’s 79, and that obviously is great.”

The spring 2018 collection takes the youthful sporting theme a step farther: It’s filled with faded rugby shirts adorned with frayed, homemade looking patches and v-neck cardigans and sweaters with edges that look as if they’ve been nibbled by moths.

Kearns has also put a streetwear spin on classic cricket trousers — doing them in feather light flannel from the historic English mill Fox Brothers & Co., and with a slimmer silhouette. There are soft, faded tennis shorts with a vintage feel — boxy and high-waisted — and longer khaki shorts with a contrasting blue tape detail.

Tailored looks include a summery riff on the military great coat, done in crinkly khaki cotton, and piped or striped blazers, as well as long shirts with detachable collars.

Kearns said he was thinking about clubs, teams, Oxford, Cambridge and the London Summer Olympics of 1948 — known as the Austerity Games because they took place in the wake of the Second World War.

“Athletes made their own way to the games, they rode the Tube [subway] and sewed badges onto their own clothes because there was no money for uniforms,” Kearns said. “It’s a very masculine statement,” he said, adding that the brand has also been adding more washes, details and finishes as the seasons evolve.

Kearns said he and Beckham have always been on a similar wavelength. “When we first met we discovered that we both love heritage and vintage clothes — and we saw something in that to re-create. Now it’s about establishing those core elements and getting the product at the right level in the market.”

Beckham said another challenge has been to create “one story across the brand,” so that everyone from China to the U.K. to the U.S. recognizes the K&C signature.

While Kearns and Beckham have been promoting the image, Ray Clacher, executive vice president of Trinity Brands, has been pushing on the wholesale and retail front.

While the hot project may be the Floral Street store — Clacher calls the location a “good spiritual home” — he’s also secured accounts with Saks Fifth Avenue for six stores and online, and will continue working with Mr Porter, K&C’s launch partner.

In the U.K., the collection will be stocked at Selfridges, Harvey Nichols and Matchesfashion.com because Clacher believes “if it’s not strong domestically, it can’t be strong globally. And this is a global collaboration with David Beckham.”

Galeries Lafayette, LuisaViaRoma and Lane Crawford are among the 32 new wholesale partners that will carry the collection as of the fall 2017 season.

Clacher said in a telephone interview that the brand will also launch a new web and e-commerce site in September, and that his goal is for it to become the brand’s number-one store. In China, it  sells on Tmall and JD.com.

Clacher added that he’s planning to roll out the new store concept to 10 of the 100 Asian stores by the end of the year, at locations including Pacific Place in Hong Kong and at MixC Shopping Mall in Shenzhen.