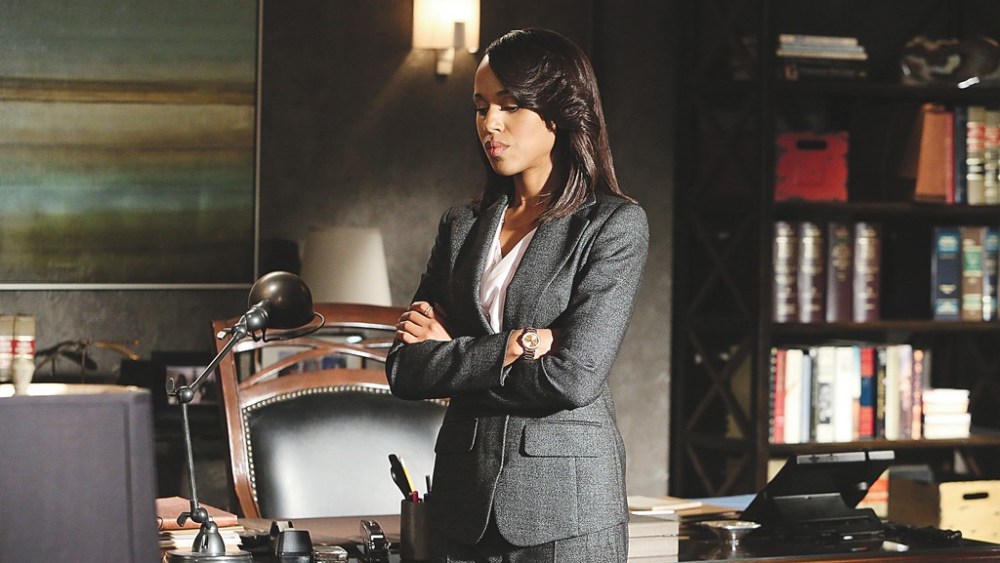 This fall, fans of Kerry Washington’s Olivia Pope character on ABC’s hit political drama “Scandal” will be able to shop for some of her on-air looks at The Limited.

Talking up The Limited Scandal collection in an interview earlier this week, the Emmy-nominated actress said, “People who love the look of the show can now step into this world in a way that is affordable and accessible because not everybody can afford to have the clothes they see on the show.”

With her wide-leg trousers, chic blouses and signature outerwear, Washington’s on-air role has a defined fashion sense that rivals her real-life red-carpet one. Joining forces with the show’s costume designer Lyn Paolo and The Limited’s head of design Elliot Staples, she said, “It’s been really fun to have a voice at every stage of the production from picking buttons, choosing fabrics and weighing in on hair and makeup people.”

Reconfiguring the traditional on-screen celebrity tie-in, the deal is said to be the first linking up a national retailer, a leading network show, its costume designer and marquee actress. Washington, who had her first child in April, said she, Paolo and Staples were continually in contact via Skype, e-mail, in-person and online meetings, FedEx shipments and texts. “Being an actor who has worn fashion and being somebody who is a fixture on red carpets, I have been able to pull from every level of my experience, including working with magazines.”

Just as her crisis management alter ego knows how to dress the part, so does Washington, who has been known to run with the fashion crowd, though she was hesitant to play any favorites. She said, “We weren’t inspired by any designers in particular because they are all original pieces that are authentic to the character and the world of the show. Personally, I have tons of favorite designers. I don’t gravitate toward any one designer because I think of fashion as the costume of the everyday woman. The Armani house was one of the first ones to dress me. Jason Wu is a dear friend of mine, as is Tory Burch. I am a big fan of Alexander Wang.”

While Washington will not solely wear The Limited Scandal collection on the show, the collection will be one that he and Paolo pull from. With retail prices ranging from $49 to $248, the 42-piece collection will land in 250 Limited mall-based stores and on the retailer’s Web site in late September. A heavy social media effort that will be a key part of this fall’s omnichannel advertising campaign is in the works, with commercials being a possibility. The Limited is in talks with ABC.

The Limited’s chief executive officer Diane Ellis said, “Her character represents a confident, powerful, but real and kind of vulnerable woman. Our sophisticated professional can really relate to that. She’s dealing with crisis, scandal and a life that is very complex and challenging, not maybe to the extent [as Olivia]. I don’t think our typical client is having a relationship with the president. But she’s dealing with her own version of complexity and juggling a young family at home and perhaps a career. The appeal is at the same time she always looks fabulous.”

The Scandal-inspired line is in sync with The Limited’s multitiered strategy to woo more sophisticated professionals. Having initiated an extensive consumer segmentation study after joining the company nine months ago, Ellis said, “We have a laundry list of about 15 different growth initiatives that really emerged out of this research,” noting that petites were recently launched with this specific fashion lens and have had a tremendous response. (Talls will make their debut this fall, and rolling out more outlet stores is another priority.)

“We had many sophisticated professionals as part of our client portfolio already, but we were perhaps not as focused on that target client. We were a little unfocused on our personal style point of view,” Ellis said. “This [Scandal line] has really helped us home in on who she was, what her drivers were to purchase, what is important to her and what her personal style is.”

While encouraging voter registration through marketing is something The Limited had not thought of but may consider, Washington, a speaker at the 2012 Democratic National Convention, said she prefers to keep her own politically-minded pursuits separate. “I don’t do my political work as a quote-unquote celebrity or somebody in the public eye. I am involved politically because we live in a democracy and we all as Americans have the right and the responsibility if we choose to be involved in that way. I do that work in my personal life even though it can get confusing because the show takes place in Washington and deals with politics. My politics are very separate from the show. I mean, Olivia Pope works for a Republican.”