Boys & Girls Club camp kids learn to put on a fashion show — a rather professional one, set to take place on Aug. 20 at Macy’sin Herald Square. 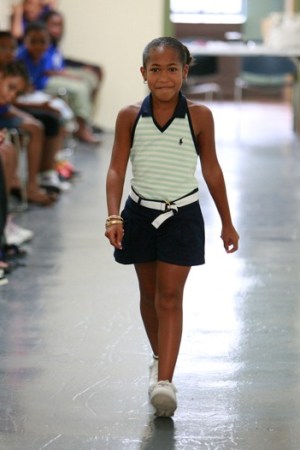 It’s late Monday afternoon, and there’s a casting call taking place uptown on West 114th Street. Models hustle in off the elevator, Polaroids are snapped, and, one by one, the girls and guys strut down a long hallway to flaunt their catwalk carriage. Sound familiar? There’s one difference: Most of the participants have yet to enroll in high school.

This is week four of the Boys & Girls Club of Harlem’s two-month summer program and, amid the museum trips and tennis activities, the kids here are learning how to put on a fashion show — a rather professional one, set to take place on Aug. 20 at Macy’s in Herald Square. They’re learning about all the behind-the-scenes action, courtesy of Kimora Lee Simmons and her Phat Fashions kids’ team. Today is a lesson in go-sees.

“A fashion show is something we do all the time to get our brand out there,” says Shaun Williams, marketing manager of the division. “This way, we can support the community that has supported us so much.”

The children, ages seven to 15, are in charge of everything from advertising (via flyers) to styling. There’s even homework: The youngsters have to research the types of accessories they’d like to feature with the clothes. Though the group doesn’t have a hand in designing the actual Baby Phat Girlz and Phat Farm Boys garments, Williams notes that the children selected each runway look, and next week will be customizing the lineup with trims, sequins, rhinestones and appliqués. They helped create the show’s theme, as well: Unable to agree on one, the kids opted for a hip-hop-meets-Coney Island hybrid. “I always thought [to be a designer], you just had an idea and came up with a fashion line,” says one of the program’s older participants, Penda, 15. “But now I have more of an idea of what it takes. It’s a lot of organization and business. You need to worry about retailers and employees.”

While the camp set might not yet grasp the inner workings of the Garment District completely — one nine-year-old lists his favorite “designers” as Phat Farm, Old Navy, Nordstrom and Ed Hardy because “his name is on the clothing” — they can certainly engage in heated discussions about their favorite celebrities. Topping the list: Beyoncé, Ciara and Keri Hilson. And though Rihanna might have the fashion pack enamored with her edgy, take-no-prisoners style, she hasn’t exactly won over the Boys & Girls Club crowd. Why? “The hair,” one girl explains. Adds another: “I don’t like mohawks.”