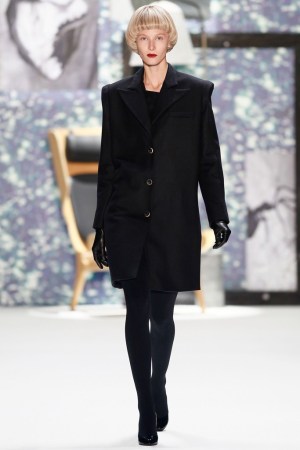 The only young Berlin designer to have staged 10 consecutive fashion shows during Mercedes-Benz Fashion Week Berlin, not to mention being the first to set the tone with live pop music accompaniment, Kilian Kerner tried marking his label’s dramatic decade benchmark with high drama silhouettes this season. To sometimes ungainly effect. But overlook the walking sculpture gowns and asymmetric frippery, the glaring mustard and black combos, and, for those who don’t have a soft spot for the early Beatles, Monkees et al, the bowler haircuts, Kerner’s line-up did include a lot of wear-me-now merch with uncomplicated appeal.

His men, very much in the minority this season, nonetheless retained a mod edge. Highlights included sleek one-button suits and an elongated three-button jacket, topping pullovers and sometimes dark printed shirts and ties, and believably wide pants snug in the back, shown plain front in soft cord or in loosely pleated in flannel.

Kerner’s gals are a varied lot. Sometimes simply elegant in a little black silk blouse with and tight cigarette skirt smocked in the front. Cool yet cuddly in tactile knits, which topped everything from a white sci-fi plastic A-line skirt, a lacquered and sequinned print gown, a bubble quilted leather look skirt and printed T-shirt, slim, cropped cord pants or going it alone in a slinky, cowl neck dress. Or party hearty in sequins, glistening in burgundy, looking like a map of the world in a pastel print, or encrusted in gold.