Kim Gordon, who this week will celebrate the opening of her art exhibit at New York’s KS Art Gallery, talks about her creative life.

By Venessa Lau and Kim Friday on May 3, 2010
View Slideshow 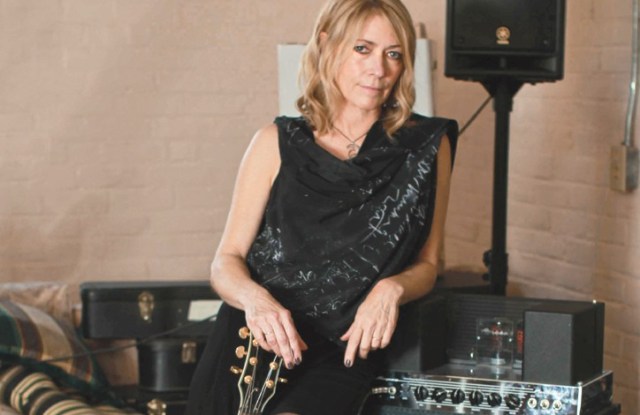 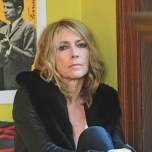 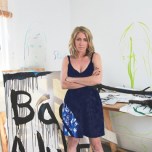 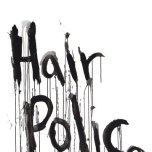 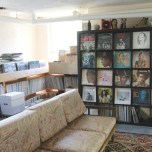 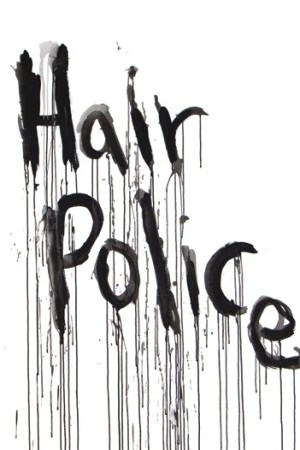 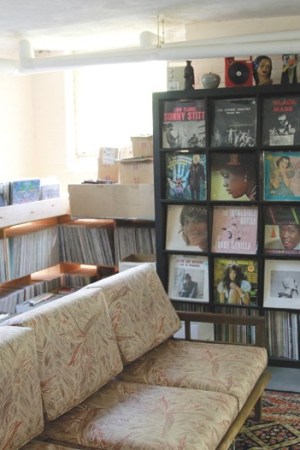 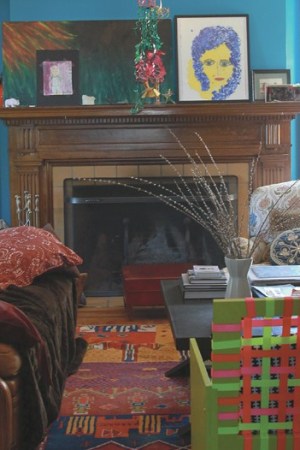 On a windy Thursday morning in Northampton, Mass., Kim Gordon is holding court in her basement, giving a tour of its cavernous environs. There’s the usual storage miscellany — boxes, discarded decorations and dusty, decades-old puzzles, including a 150-piece jigsaw of Starsky and Hutch resting askew on an even dustier bookshelf. But this is Gordon, she of Sonic Youth fame, and the brimming cornucopia of plain-old stuff here is both treasure trove and time capsule. For starters, this is where Gordon and Thurston Moore, her bandmate and husband, rehearse. “We wrote most of the last record [2009’s ‘The Eternal’] here,” she says, gesturing toward the drum set, guitars and music stands littered throughout. The back half of the space is bursting with records, cassette tapes and CDs in endless bookshelves and rows — that’s Moore’s personal collection.

The rest of the odds and ends scattered around are more indicative of Gordon’s life off the stage. Here, on the wall, is a traditional Chinese painting of birds among flora. Gordon reveals that when she was 12, she spent a year living in Hong Kong, thus the random Chinese tchotchkes. There, on a shelf, are two sculpted clay busts (art projects from Gordon’s childhood) and, over in a corner, is an impressive glass painting from high school of a seated figure with her arms tucked close to her chest, hands to chin. “I liked the fluidity of painting on glass,” she remarks. “That’s one thing that got me back to the watercolors.”

Gordon is talking about her recent immersion in the medium. In March, she published a book of artwork “Performing/Guzzling,” with Rizzoli; last month, she came out with a portfolio, “Kim Gordon: The Noise Paintings,” to accompany a current exhibit at the John McWhinnie @ Glenn Horowitz Bookseller and Art Gallery, and on Friday, she will open yet another show at KS Art Gallery, which will also double as the book party for “Performing/Guzzling.” Come June, she’ll publish yet another art series, with New York boutique No. 6.

So is Kim Gordon in the midst of an art moment?

If she is, just don’t tell her about it. Gordon is quick to shut down any suggestions that, with all the goings-on, there’s something unusual stirring. But she does concede that her increased art output of late comes, in part, from being a mother to 16-year-old Coco. “You want to be a good role model,” she says, “and make sure you do the things you started out to do in your life.”

Those more familiar with Gordon’s iconic rock-star status — the name “Godmother of Grunge” is frequently bandied about — might be surprised to learn the Los Angeles-raised singer started her career as a visual artist. A graduate of L.A.’s Otis College of Art and Design, Gordon didn’t formally enter the music scene until fellow artist and friend Dan Graham cast her in an all-girl band for a performance piece in 1980.

She met Moore shortly afterwards, and the two, with Lee Ranaldo, formed Sonic Youth in 1981. (The group, who will be giving a free concert at Prospect Park in Brooklyn in July, now includes Steve Shelley and Mark Ibold, as well.)

Gordon has always mined her arty roots — whether writing for Artforum in the Eighties or incorporating the works of Gerhard Richter and Mike Kelley, among others, in album cover art. She has participated in and curated the occasional exhibit before, too.

But until recently, she has kept her own artwork fairly separate from the music realm. “I wanted to be taken seriously as an [visual] artist,” she says, “and it’s hard if people know you better as a musician. But, I don’t know, I kind of realized it doesn’t really matter.” The new publications, to that end, all feature music-inspired artwork.

The bulk of “Performing/Guzzling” consists of blurry, abstract portraits on rice paper — they’re the figures she sees as she looks out to the audience while onstage. “I’ve always been interested in the relationship between performer and audience,” she notes. “I like the idea of making the audience the performer.” Toward the back of the book, there’s an amusing set of candid on-tour photographs, including several of the singer’s own lap. “I was bored,” Gordon deadpans.

Her “Noise Paintings” series — five of which are in “Performing/Guzzling,” with the majority in the John McWhinnie portfolio published by Moore’s own Ecstatic Peace imprint — features paint-splattered words, smudged and dripping, such as “16 Bitch Pile Up,” “Slow Listener,” “Testicle Hazard” and “Talk Normal.”

For the uninitiated, the phrases are names of underground bands of the Noise movement. “The Noise scene is so obscure and also something that’s so free and pure,” says Gordon. “It’s never going to become a commercially viable thing. So I liked the idea of making something that might appeal to a consumer to buy in the way someone might buy a T-shirt from a place [he’s] never been before.”

During Friday’s exhibit at KS Art Gallery, she also will unveil a new text series based on phrases she has made up. “The funny thing is, I have really awful handwriting,” Gordon says. “I’ve always hated it.”

Meanwhile, Gordon’s June portfolio with No. 6, yet to be named, spotlights a line from Fleetwood Mac’s classic “Rhiannon” song — each painting in the portfolio features a single word. “It fits the aesthetic of the store,” she says. “And as it turns out, [owners Morgan Yakus and Karin Bereson] are really into Fleetwood Mac.”

The way that particular project came about owes a great deal to Gordon’s fashion savvy. She’s a frequent shopper at Yakus and Bereson’s hip downtown shop. Her style know-how is evident throughout the WWD shoot, too. Gordon already requested some of her favorite brands — Acne, United Bamboo, Rachel Comey and Electric Feathers — and, as she sifts through the racks in her chartreuse-colored piano room, she is above all else mindful of pairing her outfit with wherever each shot will take place. “I’ve learned a few things,” says Gordon, the daughter of a seamstress, with a laugh.

Indeed, Gordon has already helmed her own fashion line, twice. The first time was in 1993, when she launched the now-defunct street collection X-Girl with friend Daisy von Furth. Then, in 2008, the singer partnered up with Melinda Wansbrough and Jeffrey Monterio, both of whom are Mayle alums, for their Mirror/Dash line, exclusive to Urban Outfitters. The name stems from Gordon and Moore’s nicknames (she’s Dash), and the inspiration, at least initially, was Françoise Hardy. “I’m always inspired by her,” she says. “But Urban Outfitters — no one’s going to buy a pantsuit, no matter how cool it looks.” The offerings now consist of easy separates — nautical blazers, silk pants and day dresses. Next up for the singer: a three-style collaboration with Sportmax for the fall 2011 season.

And yet, for all her fashion cred, Gordon visibly cringes when the term “fashion designer” is lobbed at her. “I would never think of myself as a designer,” she replies. “It’s more like a stylist wannabe.” Instead, she reserves her respect for designers such as Rodarte’s Kate and Laura Mulleavy — “they think like artists” — and Marc Jacobs, with whom she’s had a long-standing relationship. The two met back in 1992 when Sonic Youth was working on the music video for its “Sugar Kane” single. The director, Nick Egan, happened to be friends with Jacobs. “Nick said, ‘Oh, I have this friend who has a showroom. We can use his clothes,’” recalls Gordon. “It was funny that it happened to be the grunge collection [for Perry Ellis]. We filmed in the company’s showroom. I suppose he knew he was leaving, anyway.” The video also starred a teenage Chloë Sevigny.

Since then, Gordon has appeared in Jacobs’ advertising twice, in 1998 (she was his first campaign model) and, several years later, with Moore, Coco and their niece, Louise. “I got a call from Robert Duffy after the [second] ad,” says Gordon. “He said they got so many positive letters because it showed a wholesome family. Usually, they get hate mail, ‘she looks too young or she’s pregnant…’” She also jokingly credits Jacobs for turning her on to wearing dresses while performing. The other reason she gives: “I liked the contrast of something more feminine with what fashion thinks rock should look like — you know, the predictable leather pants.”

When questioned about the public’s greatest misconception about her, Gordon replies: “That I’m a strong woman.” Which might come as a surprise to those aware of her gritty onstage persona. “I mean, I like to take risks,” she clarifies, “but I’m very susceptible to things and don’t have a lot of defense mechanisms. In that way, I don’t feel strong.”

As the singer-cum-artist says this, she’s in her upstairs art studio, its blue floor strewn with glitter and splatters of paint. Behind her are two word paintings: the first, on the wall, is an old saying of her daughter’s, “Stuck on Gum,” and the second, in broad brushstrokes on a canvas that she’ll show on Friday, the phrase: “Bad Adult.”

Read more on Kim Gordon on the WWD Blog >>

HAIR BY COREY MORRIS FOR SALLY HERSHBERGER; MAKEUP BY NICO GUILIS FOR CHANEL AT SEE MANAGEMENT