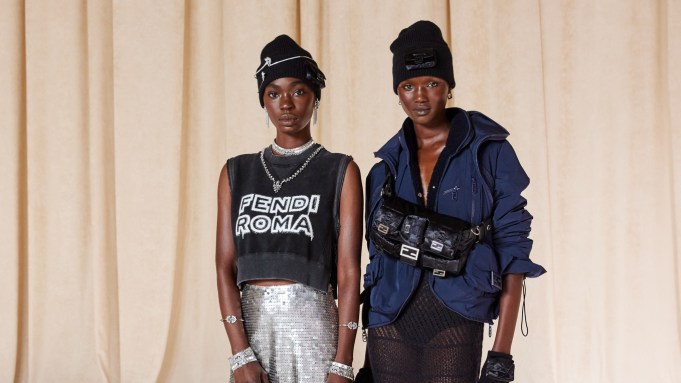 “I really thought she’d live to 100, I don’t know why,” said Fendi women’s designer Kim Jones, who was appointed Officer of the Order of British Fashion in 2020, speaking just a couple of hours after the death of Queen Elizabeth II on Wednesday.

Then, with that proverbial stiff upper lip, it was onto the job at hand.

Fendi is one of a number of European brands energizing New York Fashion Week this season, staging a full-scale runway show and clothing collection inside a packed Hammerstein Ballroom on Friday night in celebration of the 25th anniversary of the iconic Baguette bag, introduced in 1997.

Also following the money to the growing American luxury market, Marni has taken its show on the road, while Givenchy, Courrèges, Kiton and Isabel Marant are toasting new Stateside stores with dinners and parties. Munich-based luxury e-commerce site MyTheresa also planted a flag at New York Fashion Week, hosting a lunch for Gabriela Hearst, and celebrating overall U.S. sales rising 110 percent over the last year and a half.

Texas and Florida may be the hottest American retail markets right now, but New York Fashion Week is the place to go for media heat, which is why Fendi chose it to reignite the Baguette business. New York put the Fendi bag on the pop culture map, thanks to a cameo in the original “Sex and the City” series.

So, of course, Sarah Jessica Parker was at the show — along with Kim Kardashian, Kate Moss, Linda Evangelista and a slew of other notables — and even created her own personalized take on the Baguette.

Jacobs created a collection within the collection, using his love of logomania to play with the Fendi moniker on Baguettes, and designing 10 looks in the spirit of his current exploration of historical romance meets street.

That connection was serendipity, more or less, Jones said, explaining how he realized while opening the Fendi store on Fifth Avenue across from the Tiffany flagship that the Baguette is not only a bag, but a diamond cut.

“I wanted to combine those three things, and it’s quite playful and celebratory,” he said of the Fendi, Marc Jacobs, Tiffany trifecta cooking up the bingeable looks.

“There’s a lot of depressing things happening in the world so I thought it was good to have a bit of fun,” he said, flashing a new gumball-sized Tiffany diamond on his finger.

Hitting stores next month, the collection includes colorful sportswear, shearling outerwear and cool tailoring, all with maximalist details like tulle on top of slip skirts, sequins on top of sweatshirts and boiler suits, and pockets turned into Baguettes on fleece pullovers, baseball hats, gloves, gators and socks.

“It’s been really exciting to see how a bag can be transformed into a collection,” said Silvia Venturini Fendi, the brand’s creative director of accessories, menswear and children who created the original style as an alternative to the ’90s ubiquitous backpack — one that still allowed for hands-free movement with its ergonomic, tucked-under-the-arm design.

“It was one of the first bags that was embroidered but meant to be worn during daytime, so we liked the idea of having a mix of embroidery and sequins and sweatshirts,” she said of the clothing collection.

New iterations of the Baguette itself include a multipocketed version souped up for today’s gadget hounds. “You have a places for your airpods, your toothpicks, your asthma inhaler, it’s good for guys and girls, and it can also be a bum Baguette,” Jones said, noting the adjustable strap on his personal bag, in pale pink.

For his take, Jacobs developed a “Fendiroma” logo. He mashed up his brand codes with Fendi’s, creating a calfskin Baguette emblazoned with the words “The Baguette,” playing off his “The Tote” designs, as a well as an extra version dripping with Swarovski crystals.

Jacobs brought the silhouettes and fabrics from his recent ready-to-wear collections into Jones’ world, using a color palette of fluro yellow, silver, gray and white inspired by workers on city streets, and fabrics bleached or sheer overlaid, he said.

“I like the idea of taking jeans, jean jackets, sweaters, the way people really dress, and instead of saying it’s such a shame that’s what people look like, embracing what speaks to them and reforming it into something evocative of a period with more romance and magic,” said Jacobs of what’s exciting him in fashion now.

“When you tie a coat around your waist and it creates a bustle, or when you make a long skirt out of a pair of jeans, there is something old and historic. But when you break up the components, and you can identify them, you see it’s not a costume. It’s nice to squint and see what’s in front of you in a more magical way. When I look at it, I see a romantic vision of what street clothes look like.

“And when you think of New York, it’s a pair of sneakers, jeans, a jean jacket, a tote bag and a Baguette,” he said. “It takes the stuffing out of European fashion.”

But probably not the dough.