The pair burst in at the last possible minute before the lights went down with little North West in tow, wearing custom Wang, no less.

By Erik Maza and Lauren McCarthy on February 15, 2015
View Slideshow 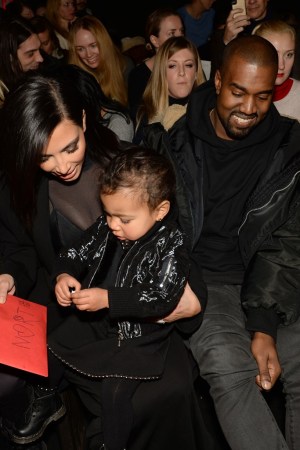 On Saturday afternoon, the rapper YG was at Pier 36 in Manhattan’s East Side waiting front row for Alexander Wang to start. It was his first fashion show ever and he was a little overwhelmed.

“I like the vibe. There’s a lot of important people here, you feel me?” he said. There were in fact a lot of, well, not important, but certainly noteworthy personalities in the vicinity. Not too far away was Nicki Minaj, Zoe Kravitz and the actress Natasha Lyonne.

But the biggest stars of all had yet to arrive. Finally, Kanye West and Kim Kardashian burst in at the last possible minute before the lights went down with little North West in tow, wearing custom Wang, no less.

Wherever the West-Kardashians go — the Grammys, his Adidas collaboration — cameras follow, and so it was no surprise to see them on the clock, even on Valentine’s Day. What’s more romantic than sitting pretty for a few of your nearest and dearest photographers at a handful of fashion shows?

It was a working day too for another member of their extended family, Kardashian’s little sister Kendall Jenner, who walked the show. After Wang, the Kim and Kanye show went on the road to the West Side’s Pier 59 for Robert Geller. She had enjoyed the Wang collection.

“I thought it was amazing. Really tough, but I loved all the metal mesh at the end,” Kardashian said, unencumbered to speak to a reporter now that she was at a more low-key venue. They were there because Geller is a friend of her husband’s, she said. But there was one bundle of joy who seemed to be missing: Where had they left the kid? It takes so little to upset West, as we know, and this question did just the trick.

“No — don’t, don’t, don’t, don’t,” West snarled, indignant. “‘Where did you guys leave the kid?’” The problem seemed to be the reference to his firstborn with something as ordinary as “the kid.” “We don’t call it the kid,” Kardashian added helpfully. Once he was talked off a ledge, West backed down, if only a little. What did he think of Wang’s show?

“I’m not going to answer any more questions. I’m just telling you, you don’t ask about our damn kid,” he said. OK!

At around the same time, Marc Jacobs was making a pronouncement at the Bookmarc shop in the West Village.

“Kendall Kardashian, everyone,” the designer proclaimed as he walked in with another hard working member of the clan, who was fresh off the Wang runway.

“I literally ran to my room and put my hair up, because it was all greasy from the show, took off my makeup, put on some mascara, and now I’m here,” she said. It was something of a homecoming for her. A year ago, Kendall was cast by Katie Grand to walk in Jacobs’ fall 2014 runway show, up until then her most high-profile assignment as a model. The reason she was at the store on Saturday night was to sign copies of the latest issue of Grand’s magazine, Love, where she’s featured alongside some of the biggest names in the business, like Gisele Bündchen and Miranda Kerr. Outside, the crush of fans and paparazzi required the presence of the New York Police Department for crowd control.

“Who’s in there, Kanye West?” asked an irritated passerby. It wasn’t, but isn’t it starting to feel like he’s everywhere?