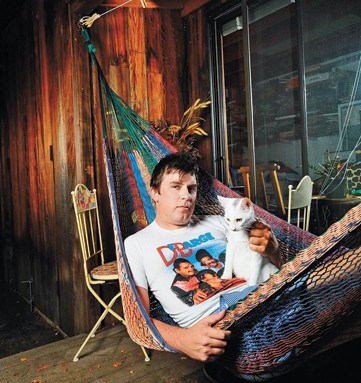 If your jaw hit the floor the first time you walked into What Comes Around Goes Around and saw a $250 price tag on your long lost Prince T-shirt from the “Purple Rain” era, you’re not alone. In the last five years, vintage concert Ts have become bona fide luxury items whose overexposure has done nothing to deplete their ever-ascending value. These days, the best bet is to go on eBay, where a seller known as Rainbow Gasoline (né: Joe Rockwell) has emerged as America’s leading expert on vintage concert Ts. His shirts aren’t cheap either, but with most of the good ones running for between $75 and $100 it’s still a better bet than shopping anywhere in the West Village.

WWD: Tell me how you got started.
Joe Rockwell: I was always into vintage clothing. I was a collector and I held on to my own concert shirts for years and years. In a panic around 1998 or 1999, I was moving from San Diego, and a girlfriend convinced me to just get rid of them. A year later, concert T-shirts had become huge business, and I was just kicking myself in the butt. But I did learn that if you wanted it bad enough, it always came back on eBay. You no longer have to have regrets about getting rid of anything. It’s a buyer’s market.

WWD: Had you worked in fashion before you set up your site on eBay?
J.R.: No. I was working with handicapped folks. I actually moved in and was a care provider for a guy. I wasn’t making any money and the guy had an overbearing sister. Finally, I just had had it. After I quit, I began really going on eBay.

WWD: You divide your business between selling on eBay and at the Rose Bowl, Los Angeles’ legendary Sunday morning flea market. How would you describe your client base? Is it mostly fashion people or vintage store owners?
J.R.: It’s all Japanese people. I could stay open for locals, but they’re just lookers. The Japanese have money and they’re early birds. Me and my girlfriend roll in with the racks a little after 5 a.m. and are out by 10 a.m.

WWD: Whose shirts fetch the most money?
J.R.: Well, I sold a Sex Pistols shirt last week for $500. But I paid over $200 for it. In general, the older it is the more money it goes for. The Clash, the Stones and Prince do especially well. And Iron Maiden shirts are huge. Every time they tour they make specific shirts for specific cities, and they have great artwork.

WWD: As prices for these shirts reach the stratosphere, do you ever feel that what you do is antithetical to the spirit of rock ’n’ roll?
J.R.: Yeah. It’s so not punk rock to pay $500 for a Sex Pistols shirt. So they buy it and you go, “poseur.”

WWD: Whose shirts would you expect to be valuable but aren’t?
J.R.: Duran Duran. They’re cool, but there are so many out there, so they sell for cheap.

WWD: Occasionally, you sell old “parking lot” or bootleg T-shirts. Do you ever get in trouble?
J.R.: Yes, twice with Bob Marley, and twice with Suicidal Tendencies. I had a Van Halen T-shirt eBay took down. Any bootleg shirt can get you in trouble and unfortunately, some of them are really cool. I can understand where the bands are coming from but when it’s one little shirt and it’s vintage, come on.

WWD: So what happens when you get busted?
J.R.: You get an e-mail from eBay saying your listing was removed because of intellectual rights regulations. After it happened a second time with Bob Marley, I couldn’t come back on the site until I took eBay’s little class, where you go through a tutorial and then do the test online. The questions are like, “If you don’t know whether it’s OK to sell an item, what do you do?” It was like, “Duh.”

WWD: Now that you sell between $10,000 and $15,000 worth of concert T-shirts a month, do you find yourself wearing them more or less?
J.R.: Less. And I like the silly ones best. De Barge and Milli Vanilli. No one wants them.