Newlyweds Amy Krofchick and Brett Perkins talk about life together and the fall launch of their new knitwear line, Amo & Bretti. 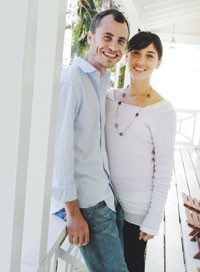 NEW YORK — The first year of marriage is about so much more than kissing and cuddling. There’s also the hassle of joint taxes and bill-paying, not to mention figuring out who gets which drawer. But that’s nothing compared with the task that was at hand for newlyweds Amy Krofchick and Brett Perkins, owners of the knitwear line Amo & Bretti (named for their family nicknames).

“We got married in May 2004 and then just started working on the line right away,” says Krofchick, the creative half of the duo. And because she’s a third-generation knitter, launching such a collection was second nature for her. “Giving a knitted item was always an expression of love when I was growing up,” Krofchick says. It was also a sign of approval from her mother, Katy. If Krofchick brought home a boyfriend that mom liked, she’d ask him, “What are your colors?” Not long afterward, he’d be presented with a homespun blanket as a welcome-to-the-family gesture.

Krofchick, 29, puts the same thoughtful care into her whisper-thin cashmere sweaters and tanks, which come in understated creams, pastels and black. All the looks are monotone with subtle details such as an oversized collar, big buttons or crocheted trim. “We wanted to make a knitted garment that’s feminine and unique,” she says. “Our girl is someone who goes to a party and attracts attention — not in a loud way, but because of the way she carries herself, because there’s something about her style.”

That’s just what Krofchick does, says her clearly smitten husband, who admits he had a crush on her when they were high school sophomores in Canada. The two didn’t connect romantically until a few years ago in Los Angeles, where they’re now based. Perkins, 30, takes care of the business aspect of the line, aiming to fill a hole he sees in the knit market. “The Missonis are making magnificent garments, but for most people, the price point is not very attainable,” says the former stockbroker. “But if something’s mass produced, it’s manufactured with a generic fit for the biggest range of marketability.” Enter the luxe pieces of Amo & Bretti, with wholesale prices that range from $69 for a basic tank to $165 for a shawl-collared cardigan. Retail runs from $179 to $418.

Amo & Bretti’s launch season, fall 2005, will be carried at Fred Segal in Santa Monica, Calif., and about 30 specialty boutiques around the country, including Fahrenheit 451 in Westhampton, N.Y., and Bleu in Los Angeles, but the brand has yet to crack the Manhattan market. Krofchick and Perkins hope to impress the stores they like to visit when they’re here — Barneys New York, Henri Bendel, Bergdorf Goodman, Kirna Zabête, Scoop and Intermix.

And maybe after that, the pair will get a chance to do the kinds of things normal newlyweds get to do. “We haven’t even had a honeymoon yet,” says Perkins.

“Amo & Bretti is our baby,” adds Krofchick. “It doesn’t talk yet or give back, but it will.”