Eight years after launching her line, Koi Suwannagate is taking the next step. 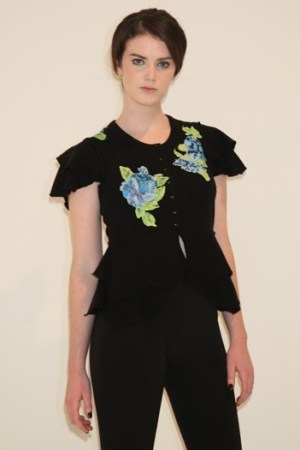 Eight years after launching her line, Koi Suwannagate is taking the next step. Today, the Los Angeles-based Thai designer launches her first secondary line, Lawan, in collaboration with Anthropologie. And while that particular partnership has been months in the making, Suwannagate has been contemplating this next move for nearly two years — ever since she was named a finalist for the CFDA/Vogue Fashion Fund in 2007. “I wanted to be partners with someone,” says Suwannagate, “and take the company to the next level.”

At the time, Suwannagate discussed a possible partnership with American Apparel chief executive officer Dov Charney; the two, she explains, are longtime friends. (The infamous exec, in fact, was present at her recent spring show and took home her oversize presentation props for use in his retail stores.) While that collaboration ultimately didn’t pan out — “He had so much on his plate,” she tactfully remarks — Suwannagate is optimistic about the Anthropologie pairing. “What I do is handcrafted and I wanted to keep that aesthetic with the new line,” she explains. “Anthropologie is perfect — when you go in the store, you’re going into this crafty world.”

Lawan, named after the Thai word for “beautiful,” retails from $228 to $298 and features four styles for its debut: two cardigans, a gown and a sleeveless top, all embellished with Suwannagate’s trademark hand-sculpted appliqués.

“I think it’s a good outlet for reaching out to my other clients who are more price-conscious. There’s a need for this,” she says, citing high-street knockoffs of her designs.

The ongoing Anthropologie collaboration, however, isn’t Suwannagate’s only new project. She’s also launching a gift collection for the holiday season, exclusive to her Web site. “I wanted to do something fresh that [customers] can see now, buy now, wear now,” says Suwannagate. “[The designs] are one-off pieces. Customers always feel like they can wait and buy stuff on sale. I wanted to change that a bit. This is a onetime offer.” The collection, made from recycled and vintage cashmere, retails from $2,600 for a beaded cardigan to $220 for gloves. Also featured in the lineup are throws, brooches, beanies, men’s sweaters and evening bags, including one whimsical version in the shape of a pineapple. “Everything [with the economy] has been so depressing,” adds Suwannagate. “I wanted to make something fun [people can] enjoy for the holidays.”