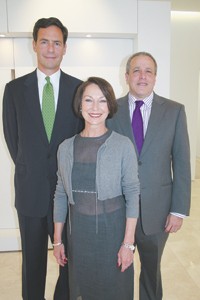 NEW YORK — The Komar Co. has transformed itself into a high-profile player with a three-tiered strategy: acquisitions, diversification of brands and product categories and creation of a luxury division.

Once known as a moderate-to-better sleepwear resource, the firm began expanding last year into designer and luxury brands with the creation of a luxury division and the launch of the high-end Vera Wang Intimates collection of sleepwear and daywear.

The Komar Co. bucked the downsizing trend as consolidation has thinned the ranks at retail and manufacturing, especially among independent smaller and midsize makers that have not diversified sourcing, products and brands to keep up with a changing retail landscape. Instead, Charles Komar, president and chief executive officer of the 98-year-old family firm that generates annual wholesale volume estimated at more than $175 million, has kept competitive by expanding operations.

For vendors, the past year has been pivotal because of the Federated-May and Kmart-Sears mergers and changes in business patterns. In response, many cut resources to survive in a smaller, yet powerful marketplace dominated by companies such as The Warnaco Group, VF Corp. and Sara Lee Corp. Consolidation in the $12.4 billion innerwear industry is expected to continue chipping away at a shrinking number of family-owned companies.

Komar, a hands-on executive, said “customization” and servicing retailers with specific brands, merchandise and lifestyle products that complement core businesses is essential to stay competitive. The luxury division is “part of our customization strategy and provides an opportunity to expand our business,’’ he said.

In addition to Vera Wang Intimates, which features ethereal-looking bridal and special-occasion fare, the luxe unit consists of three other brands: Le Mystère sleepwear and at-homewear, a year-old licensee with the Le Mystère bra brand, focuses on classic, sophisticated silhouettes. Donna Nadeau is an upscale lifestyle brand of sleepwear created in-house this year and bearing the eponymous name of the line’s designer, who also serves as the luxury unit’s president. There also is a revamped line of licensed sleepwear and daywear by August Silk, which Komar repositioned in 2005 as an updated brand with dressmaker touches like piping and cutout effects. August Silk had been a moderate-to-better label.

Asked how the launch of Vera Wang Intimates fared at retail, Mollie Cutillo, vice president of sales for the luxury division, said: “The collection was launched at retail in February to top stores with an enormous [multimillion-dollar] ad campaign. Customers have been responding to signature Vera Wang colors of green tea and wisteria. Sell-throughs have exceeded our expectations and average above 15 to 20 percent weekly.”

The line is composed of two collections: Vera Wang Luxe, which is primarily silk habutai, crinkle chiffon and Chantilly lace, and Vera Wang Collection, which is rendered in polyester charmeuse and micro Modal.

David Komar, vice president of marketing, said the advertising campaign will continue with the “same platform — half in fashion magazines, including Vogue and W, and the rest in bridal magazines like Modern Bride.”

Marketing for the Donna Nadeau collection of “organically correct fabrics” will include an informal fashion show for the media on June 27 at Cornelia, a day spa here, Nadeau said.

Meanwhile, Komar’s brands are displayed in new 10,000-square-foot showrooms and offices at 183 Madison Avenue. The entire floor was redone in a multimillion-dollar renovation that created 11 showrooms, two kitchens and offices to accommodate the sales force for Komar’s luxury division, as well as its designer, better and private brands businesses.

The luxe unit’s headquarters was designed by architects Alan James Hsia and Calvin Soh of Phoenix Inc., a firm known for designing luxury retail stores such as Fendi and La Perla. The contemporary space, formerly the black and silver showroom and offices of the Natori Co., is rendered in white, cream and beige, and flooded with natural light. Komar continues to run its administrative, design and merchandising operations on two floors at 16 East 34th Street.

Also ensconced at the new Madison Avenue location are designer brands Eileen West, a specialist of romantic-looking sleepwear Komar has licensed for eight years, and the long-established Lucie Anne name of classic, feminine sleepwear acquired from Lady Ester Corp. in April. The Lucie Anne name is more than 50 years old and had not been widely distributed for almost a decade. Better brands include the licensed line of contemporary Liz Claiborne sleepwear, and two in-house labels, Aria and Planet Sleep. Je T’Adore, a fashion sleepwear and daywear name, also was purchased from Lady Ester.

Further developing the synergies of brand categories, Komar said the acquisition of Chelsea Design Group in 2005, which brought Komar into the specialized foundations field, is expected to bolster the presence of the Eileen West name in the intimates arena, as well as the Liz Claiborne Intimates line of bras. Chelsea has been producing Liz Claiborne bras since 2003.

“With the addition of Chelsea Design Group, we have become a full-line intimate apparel resource,” said Charles Komar, noting that the Eileen West name in foundations made a comeback this spring after a 14-year hiatus. He noted that the company bought Bee’s & Jam in May, a children’s robe and sleepwear company with estimated annual wholesale sales in excess of $25 million.

“It’s a great business and very profitable,” Charles Komar said. “They have been in business for 50 years. We purchased the business from the founding family. Artie Mintz is continuing with us as the president of the company. They are a profitable, very well respected private label manufacturer of children’s sleepwear. We plan to grow the business by taking advantage of the synergies.”

The company is “actively” looking at more acquisitions and licenses in the future, he said. “We plan to continue to grow organically and through continued acquisitions. We are currently reviewing several opportunities. And we are launching Vera Wang foundations in the fall.”

But Charles Komar hasn’t just been looking at lingerie and sleepwear to build an empire.

“With the purchase of Lotta Luv, we entered the bath and beauty arena,” he said. Lotta Luv makes cosmetics, bath and body products under such brands as Snapple, Hershey’s and Dairy Queen.