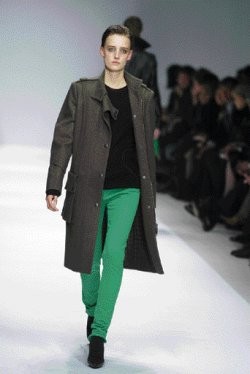 Burberry Prorsum: Like a jittery kindergartner flying high on Kool Aid, Christopher Bailey pumped up the fall Burberry Prorsum collection with splashes of vibrant color. An olive green jacket was paired with a kelly green leather skirt, while a punchy yellow windbreaker topped a sky-blue dress. The most overstimulated combinations left a color burn on the cornea, but Bailey played those brights off of muted tones, too, showing an oversized coat in army-blanket brown over a snappy pair of kelly leggings and mixing in loads of black.

In case you didn’t know, Bailey is one of those cool Londoners, so he promoted a look that’s sleek, optimistic and sporty, like the clothes his hometown hipsters wear these days. While the collection skewed young, some looks were childish, even, printed with Dr. Seuss-like illustrations of little bike riders and jockeys and cars. But Bailey fared better when he set his cap to freshening traditional preppy gear, including rugby striped T-shirts, rain slickers and boyish blazers.

In any case, Bailey’s collection earned a check-plus, as used to be the case in grammar school, while the designer’s mother and sister, who came to Milan to see one of his Burberry shows for the first time, each landed a gold star for attendance.

Moschino and Moschino Cheap & Chic: Back when that pop tart Madonna was just getting her start, around 1983, Moschino was already up and running. But as the house celebrates its 25th anniversary this year, perhaps it was looking back that brought the diva’s madcap “Borderline” days to mind. The show’s nostalgic soundtrack ranged from “Holiday” to “Into the Groove,” and so did the clothes. A dotty baby-doll dress with roiling ruffled underskirts followed a pretty white fur coat cinched with a daffy clock belt, while touches of patent leather, big satin bows, sparkly cardigans and the snappy Mod minis Madonna might have found at a thrift store during her “Desperately Seeking Susan” years rounded it all out. The girly effect was simply frilling.

While, at Moschino, the mood was a little Eighties ragamuffin, a little rock ’n’ roll, at Cheap & Chic, your average, everyday handyman provided inspiration. Down a sparkling concrete runway came an industrial jumpsuit in dusty rose, a khaki parka lined in petal pink and a denim minidress tricked out like overalls in a cheeky homage to plumbers, farmers and carpenters everywhere. Now, that’s a timeless look.

Alberta Ferretti: In Alberta Ferretti’s world, a girl just never gets cold. Whether it’s the dead of winter or the sunniest of summer days, you can always spot her as the playful one, flirting around in a pretty, floaty chiffon dress. And for fall, she’ll have plenty more of those numbers to add to her closet, done every which way, girly-style. Dresses skimmed the girls mid-thigh, with delicate little straps, bows and pleats, a ruffle here and there, or a bright ribbon sash slung across the hips. Ferretti often played with color blocks in vegetarian-friendly shades of eggplant, plum, cranberry and persimmon.

She also offered loads of great coats to toss over those little delicacies, from the lipstick patent leather raincoat that opened the show to sweet, feminine wool numbers, some with kimono sleeves. And that idea of contrasting soft with hard — the slick with the filmy — was repeated many times: red patent kilts topped by a chiffon shirt, stiff coats over lightweight dresses. For evening, Ferretti did glam her way: innocent, charming, just a bit flirtatious and always in black. But she did offer one killer item: a drop-dead, Twenties beaded flapper dress that Velma Kelly would kill for.

Marni: In seasons past, Consuelo Castiglioni’s Marni has been like a perky bird cheerily chirping outside your window. Sometimes its happy racket is heaven. Sometimes it drives you a little nuts. For fall, however, Castiglioni has turned down the volume and her timing is just right. The collection is still spirited, but it’s not naïve, and instead of reworking — and reworking and reworking — those bitsy vintage prints she loves, Castiglioni focused on the future like never before.

Of course, the future in her mind’s eye is still a lovely place, but it’s also a place for grown-ups. And nothing says grown-up like fur and tweed. Castiglioni gave it all an elegant Marni tweak, binding the seams of a cropped gray tweed jacket or A-lined miniskirt in peach, cutting her fabulous fur jackets with shortened sleeves. And this time, when she did dotted dresses they tended toward Damien Hirst, not Minnie Mouse.

Castiglioni’s approach to the spacey Mod trend was just as sophisticated, with spliced miniskirts and minidresses in taupe, peach and plum. Likewise her leathers, in jade and muted red, worked a subdued motocross theme. Hear that sweet trill outside your window? It’s Castiglioni, and she’s changed her tune.