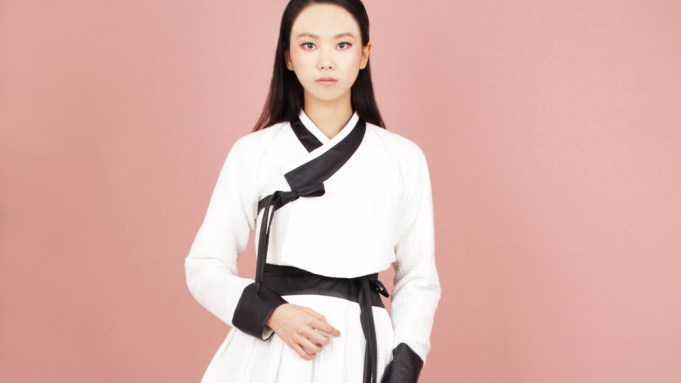 It’s the traditional Korean wedding dress, dating as far back as the 14th century. The floor-length gowns are best known for their empire waists, fitted jackets and vibrant colors.

These days, walking through Seoul’s many palaces, visitors can catch a glimpse of women donning hanboks in pretty pastels while trying to capture the perfect photo for Instagram.

But visitors to South Korea’s sprawling capital likely won’t see a hanbok anywhere else, despite the pleasing aesthetics. Even some modern-day Korean weddings opt to go hanbok-free, as the dress becomes a relic of the past.

Korean fashion designer Hyunsook Park wants to change all that. She wants hanbok fashions to break into mainstream couture, in both Korea and abroad.

“If the hanbok is not in everyday fashion, then it will disappear,” Park told WWD. “I want to keep the hanbok alive for other generations.”

Park’s been designing hanboks since 2014. But her designs aren’t of the traditional kind. The designer often wears pieces from her collection around Seoul and said her clothing can easily be mixed and matched with more casual attire, like jeans or shorts.

“You can wear it casually; you can wear it formally. You choose,” Park said. “My design is not fast fashion, but it is easy to wear.”

For her most recent collection, Park focused on black and white pieces that can be worn to brunch, the office or even more formal events. A stark contrast from the rainbow of colors that were worn by Korea’s royalty and the upper classes during the Joseon Dynasty, the color represented a person’s social status. The wealthier a person, the brighter the fabric. Commoners often wore white.

But Park insists white isn’t just for the mundane. She pointed out that white stands for purity in Korea.

“I wanted to focus on modern style and color when I was designing for this season,” Park said.

In seasons past, models walked the runway in mini hanboks skirts with ruffles, spaghetti-straps, polkadots and other vivid prints designed by Park. The outfits better fit for a garden party than an official ceremony. There are some traditional wedding dresses, too.

Park, who studied fashion in Seoul, had been working in the industry for more than a decade before she decided to branch out and form her own company. Her desire to create hanbok fashions developed after meeting other Korean designers who had studied abroad. Park said those other Korean designers were often heavily influenced from western culture and creating looks that they had seen overseas. Very few incorporated elements of Korean culture into their designs.

Then in 2014, Park, along with the help of her sister Geumsook, launched her first collection, titled GrangHanA. It took all of her savings and a grant she received from the Korean government to do it. Since then she’s opened up two retail locations in Seoul, in addition to her online shop, Granghana.com, and pieces sold on platforms like Etsy.

Visitors to Seoul’s Insadong neighborhood, where the second shop opened in January, gush over Park’s designs. She said she’s had the best response from people outside of Korea, recalling a couple that recently popped into the shop from Hong Kong.

“They asked me why I haven’t yet opened up a shop outside of Korea,” Park said. “I was touched.”

But in a conservative culture like South Korea, one that prizes tradition, not everyone is excited about someone redesigning a sacred garment that dates back centuries. Some critics say hanbok designs should be left alone.

“The traditional fashion people say, you’re not making real hanboks and you’re not making fashion either,” Park said. “But I say to them, if hanboks are beautiful, why don’t you want anyone else to see it? This is why I want to make the hanbok wearable for everyday use, so it has life. I want to give it new life. It’s clothing and clothes are part of fashion.”

Even so, her designs are not an easy sell for everyone.

During Seoul Fashion Week, which runs March 19 through 24, the bar for showing hanbok designs is high. The fashion event allows hanbok fashion designers to participate in opening shows and galas during this year’s fashion week, but not in the Seoul permanent collection.

“Special purpose fashion, costumes, garments (children’s wear, wedding wear, hanbok, etc.) are excluded from Seoul collection eligibility,” a representative from Seoul Fashion Week said in an e-mail to WWD. “Hanbok design shows are not banned. But especially in Hanbok, the standards of review and evaluation have to be changed. So currently, we are not receiving applications in Seoul collection.”

Despite the obstacles, designers like Park have not been discouraged. Park is still creating ready-to-wear hanboks and would like to one day show at Seoul Fashion Week herself.

She said she hopes her designs can help people in other countries understand and appreciate Korean fashion.