As a student at FIT, Michael Kors launched his Seventh Avenue career with a part-time sales gig at a Fifth Avenue store called Lothar’s. Quickly realizing that it was “more fun selling jeans to Cher than it was draping a pattern,”... 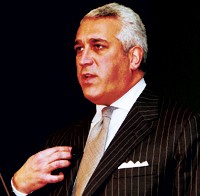 As a student at FIT, Michael Kors launched his Seventh Avenue career with a part-time sales gig at a Fifth Avenue store called Lothar’s. Quickly realizing that it was “more fun selling jeans to Cher than it was draping a pattern,” the future star designer began working at the store more and going to class less.

This story first appeared in the November 17, 2003 issue of WWD. Subscribe Today.

“Not the usual way most designers start. But it really was a fabulous experience. It was my entrée into fashion and it was a laboratory. And to me, retail still is the laboratory,” he said in a dual keynote address with his new business partner, Lawrence Stroll, co-chairman of Sportswear Holdings Ltd., which earlier this year bought a controlling stake in Michael Kors LLC.

For both Kors and Stroll, the sales floors of America’s department stores remain crucial components of the designer apparel business. It’s a place where vendors and retailers alike can glean invaluable information about customer shopping behaviors and desires — but it’s also a place in dire need of a transformation.

The problems facing department stores currently are manifold, according to Stroll. “I think we are at a challenging crossroads today in the retail environment,” he noted. “For reasons self-driven and some pressure from lower-priced mass merchandisers, and from a lack of newness from vendors, a combination of these factors has driven department stores to focus more on price, promotion, coupons, everything to drive the customer into the store in a promotional environment. I truly don’t believe, and I think you guys have realized it, that that’s not a successful way to fashion the future.”

Meeting with retailers over the past few weeks to discuss the fall 2004 launch of the new better Michael Michael Kors label, Stroll noted that he believes department stores increasingly realize that attempting to beat mass retailers at their own game is not a viable strategy. “They’ve simultaneously come to the same conclusion that I suspected they would come to. And that’s that they cannot win at the game of low. There is always someone lower, and that’s not what their forte is.”

Along with trying to win customers with low prices has come the necessary strategy of wringing markdown money from manufacturers, added Stroll. “There’s been a heavy, heavy reliance on gross margin dollars from us vendors, and I think retailers need to get back to being great merchants like they were and focus less on promotional activities. They need to drive the business with excitement and energy.”

Stroll’s criticism of today’s department store environment stems from his own experience growing Tommy Hilfiger from a $25 million business into a $1.8 billion brand, following Sportswear Holdings’ 1989 acquisition of that nascent company in 1989. “When we started Tommy Hilfiger 14 years ago in these same stores, it really was a different place. It was about the excitement of the product, of putting in shop-in-shops, of holding events when we opened a shop in a new city. Department stores were much more theatrical. There was drama and it was a fun place to go, and not because you had a coupon. Department stores need to go back to those roots.”

A key aspect of those roots involves service, and stores and vendors would do well to increase the number of salespeople on selling floors and improving their training and education, said Kors and Stroll. “It’s really not enough that the product sings, it’s all about presenting it in the proper environment and never underestimating your partners at the retail level — I’m talking about the people who actually sell the product. Keep them informed because they are the messenger,” said Kors.

One way to do that is for vendors and designers to visit retailers and educate salespeople themselves. “I do know that the difference is remarkable when you visit a selling floor, rally the troops, cause some excitement and explain the product,” said Kors. “Show people what a taped seam is. Talk to salespeople about it, open up a jacket, show that it’s reversible, unlined, lightweight, doesn’t wrinkle. Make them feel involved in the process. The effect is tremendous.” So effective, in fact, Kors noted that following a clinic he conducted with salespeople at Bergdorf Goodman this past fall, the store rang up $85,000 in Michael Kors business in the following hour. (Of course, “I certainly don’t think I’ll be able to visit every door of every store that we distribute our product in,” cautioned Kors — to which Stroll retorted, “You didn’t get my last note.”)

However, the dialogue between the sales floor and vendors can go both ways, added Kors, who emphasized the importance of remaining in touch with customers’ real-life needs and preferences. One great way to do that, said Kors, is to meet and talk to customers at events like trunk shows — something the designer has been doing since he launched his company 22 years ago. “I’d always heard about Bill Blass, the king of the trunk shows. I thought he always did this amazing job because he really knew his customer,” remembered Kors. “I actually still love doing trunk shows — I’m probably one of the last of the Mohicans. It’s still one of the best sources of information.”

Other advice Stroll emphasized was that it’s important to focus on key retail locations, and not try to market something and believe every door is going to be gangbusters. “It’s important to remember that famous 80/20 rule — that 20 percent of your doors are going to do 80 percent of your business. I think we need to focus on the State Streets and Union Squares and Fifth Avenues.”

Lacking from the current retail formula are excitement and drama, in either the merchandise offered or the way it’s presented, continued Stroll, offering up in contrast glitzy British retailer Selfridges as an example of a retailer doing things right. But part of the problem has been a dearth of powerful new labels at retail, according to Stroll, who is betting a fortune on Kors to fill that void. “I don’t think there has been a great apparel launch in the past seven or eight years. We saw that there has not been, and there needed to be, the next great American designer,” he said of his and partner Silas Chou’s decision to acquire a majority of Michael Kors.

In the quest to turn Michael Kors into a brand as influential and inescapable as a Ralph Lauren or Calvin Klein, the company will continue to expand its men’s and women’s Collection businesses within upper-tier department and specialty stores, as well as open freestanding stores. (A lease for a new Beverly Hills shop is about to be signed, according to Stroll.) “We’re going to be coming after you Burt [Tanksy, ceo of Neiman Marcus], and the Holt Renfrews and the Harvey Nichols and Saks of this world, to put up the most beautiful and luxurious shop-in-shops. We’re going to support it with the proper marketing and with all the in-store people. It’s very capital-intensive, and it’s an investment that we’re very prepared to make,” said Stroll, who along with Chou also controls the Asprey and Garrard luxury brands.

The second, and more ambitious, component of the growth strategy for Michael Kors is the wide-ranging launch of the new better label, called Michael Michael Kors, intended to catapult the company’s sales over the threshold of $1 billion a year by filling the increasing demand for affordable luxury. “It’s an unprecedented launch with so many simultaneous products, and that’s out of design, not accident,” explained Stroll. “We will be launching a full women’s collection, a full women’s handbag collection, a full shoe collection, a full men’s collection, belts, clothing, furnishings, a new fragrance with Lauder. We believe that to be successful, we have to have critical mass in the doors that we are in.”

Asked if he was concerned about eroding the brand value of the Michael Kors name with the debut of the lower-priced Michael line, Kors pointed to himself as a prime example of someone who appreciates high and low price points. “I think about what I’m wearing today,” he pointed out. “A Michael Kors jacket, Charvet shirt, Levi’s 501’s, a Hermès belt, Weston shoes and no socks, ever! I think the reality is we all mix price points.”