PARIS — Kris Van Assche has found a way to combine his passion for Pierre Jeanneret furniture with his role as creative director of shoemaker Berluti.

The designer is collaborating with the Paris-based Laffanour Galerie Downtown on 17 original Jeanneret furniture pieces from the Fifties, reupholstered in Berluti’s signature patinated Venezia leather. The series will be presented in a showroom in Miami’s Design District during Art Basel Miami Beach from Dec. 2 to 8.

Van Assche has a longstanding relationship with François Laffanour, who specializes in pieces by design icons such as Charlotte Perriand, Jean Prouvé and Le Corbusier. The two previously collaborated on a series of light sculptures by Isamu Noguchi, including some customized by Van Assche, during his tenure at Dior Homme.

This time around, Laffanour has restored a selection of pieces created by Jeanneret to furnish Chandigarh, the planned city designed by Le Corbusier after India’s independence. Jeanneret, Le Corbusier’s cousin, was appointed chief architect of the site and created complete lines of furniture for public and private buildings.

Van Assche is something of a super-fan. Having bought his first Jeanneret pieces from Laffanour more than a decade ago, he estimates 80 percent of the furniture in his home is by the designer.

“Except for anything that needs to be really comfy like my sofa and my bed, it’s all basically Jeanneret,” he told WWD. “It’s obviously graphic and angular and there is something no-nonsense about it. They’re very pure, and color is also very important within the objects. There is a very precise style.” 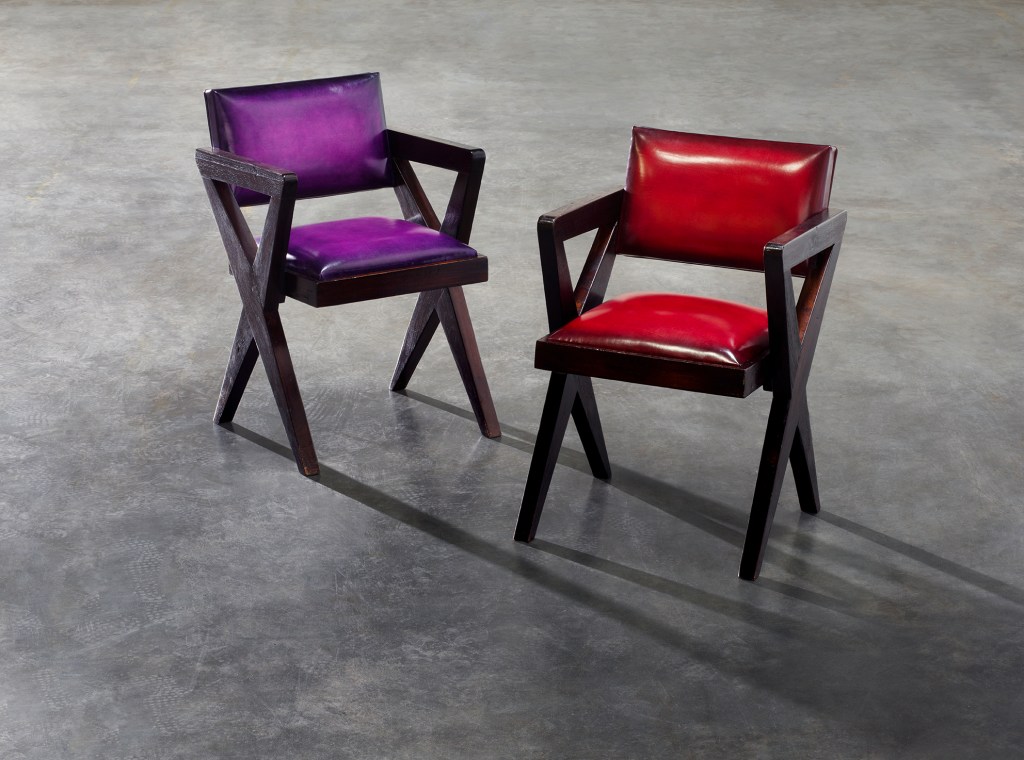 He drew a parallel between the time-worn color of the original furniture pieces and Berluti’s technique for dyeing shoes. “The idea of the collaboration started almost the same day I decided to take on the job at Berluti,” he said.

“Because it was a whole new world for me, patina, and to be able to connect that into something that I was already very familiar with kind of built a bridge for me to understand that patina within the right context could actually become something really contemporary,” Van Assche explained.

“These pieces I’m really incredibly fond of, also because it’s clear that it puts patina in a new light. People that don’t know patina, or people that might not even like patina, are going to rediscover it,” he added.

Inspired by a trip last April to Chandigarh, which also served as the backdrop for Berluti’s fall 2019 pre-collection look book, Van Assche asked his team to work on dyes in unusual shades such as orange, yellow, pink and mint.

“Bright colors are much harder to obtain than the more toned-down colors we are used to working with on accessories, so it was a real research and actually kind of a different way of working patina for the colorist people, too,” he reported.

He came up with 18 different tones, since one of the pieces, a folding screen, features two shades of blue set in a checkerboard pattern. A day bed has been decked out in Nespola orange, and a pair of cinema chairs come in Sukhna purple and Simal red.

“We wanted it to be very made-to-measure exclusive pieces, so there’s 17 pieces in a very different tone one from the other, but even if you combine them in a different way, they all really sit super nicely together,” Van Assche said. “Even a bright yellow will sit great with a green chair. That has been maybe a bit of a surprise to me.”

Prices for the furniture, upholstered by specialist Domeau & Pérès, begin at around 18,000 euros, and Van Assche already has his eye on a couple of items.

“The pieces are rare and it’s important to insist [on this point] because there are a lot of re-editions going about. Everything seems to be mass-produced. These pieces are real Fifties pieces, so they’re hard to lay your hands on. The rarity makes them special,” he said.