LOS ANGELES — In any industry, a little networking may go a long way in landing a plum job. In the apparel world, friends in the right places can open retail doors for a rookie designer. 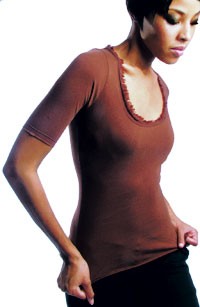 LOS ANGELES — In any industry, a little networking may go a long way in landing a plum job. In the apparel world, friends in the right places can open retail doors for a rookie designer.

“They’ve been like my brothers, being supportive and calling stores and showrooms for me,” Tan said. “When I get stressed out or down, Pep [Pepper] will give me one of his famous ‘pep’ talks.”

Feeling blue hasn’t been a problem lately. Her line’s soft holiday launch led to orders from 15 accounts, including Erica Dee in Corona del Mar, Calif., Bettina in San Francisco and Jamie in Malibu, Calif., with some cheerleading by the Fosters.

And it doesn’t hurt that Tan grew up in the business. Her mother, Nanette, owns Orbit 7, a product developer and private label manufacturer for catalogues such as Nordstrom and Coldwater Creek. The firm is providing the back-end support for the line, including the sample sewers, pattern makers and domestic outsourcing.

Tan’s father, Ben, is a production manager for Chip & Pepper, who worked at Juicy Couture. He recruited her for the job — one she didn’t even want — with the Fosters when the company launched last year, and he needed help shipping product to customers such as Fred Segal and Barneys New York.

“I had just graduated and wanted to take a break and didn’t want a job until October, but my dad called and said, ‘Please, this is for Barneys. Come in and help,’ so I said I’d do it for Barneys,” Tan said. “I thought it would be temporary, and I’d go on vacation in two weeks. I never went on vacation.”

Her long hours and commitment to her work in the shipping, customer service, public relations, sales and merchandising departments endeared her to the Fosters.

“She’d come in the morning and work till 10 at night,” said Pepper Foster. “She’s a hard worker and has a helluva eye.”

Krisa’s niche is basics injected with flair. The 25-piece collection for spring takes supima jersey, French terry and ribbed cotton and trims them in contrast fabrics, such as frayed linen and sweater banding. For example, the supima jersey group detailed with frayed linen borders includes a sleek racerback, deep scoopnecks and drawstring pants. Among the pieces in the cotton ribbed group are a hooded wrap cardigan, a pencil skirt with side slits and a sweetheart V-neck top.

Garment dying gives the line, offered in 17 colors from pastels such as honeydew and cotton candy to brights like tangerine and turquoise, its soft hand. Not satisfied yet with the feel, Tan continues to test garment dye houses.

“This line is all about the feel and if it’s not right, she [the customer] won’t buy it,” she said. Her co-designer of the line is Kasya Francisco, a family friend and Parsons School of Design graduate who designed for a high-end line in the Philippines called Kerei.

Wholesale priced from $17 for a racerback to $40 for a hoodie or trouser, the line is anticipated to pull in $3 million in wholesale volume in its first year and grow its distribution to 50 to 60 accounts.

“The line is like a basic, but with a novelty feel, sort of a James Perse and C&C feeling with Splendid and Ella Moss,” said Erica Thomas, owner of Erica Dee. “It’s supercute and superadorable.”

“Anything that Chip & Pepper has sent my way has been golden,” said Jen Audrey, owner of a two-year-old contemporary boutique in Calabasas, Calif., bearing her name. “Another coup in her favor is that she comes from a manufacturing family that is also behind her. If an item blows out, I can probably get a quick reorder.”