The service was held on Wednesday at Milan's Sant'Angelo church. 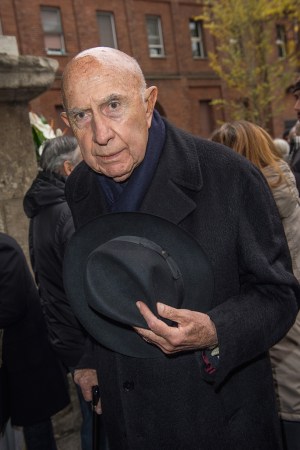 MILAN — “She was always very ironic, but tender at the same time. She had a big heart, as big as Milan is,” said Rosita Missoni to describe Mariuccia Mandelli, the founder of Krizia, who died at the age of 90 on Sunday evening.

Missoni attended the late designer’s funeral, held on Wednesday morning at Milan’s central Sant’Angelo church, along with her daughter Angela and her granddaughter Teresa Maccapani. Other members of the fashion industry were present at the service. These included Mario Boselli, honorary president of the Italian Chamber of Fashion; photographer Giovanni Gastel, as well as a range of publicists who worked with her over the years, including Angelica Monti, Valeria Czernis, Francesco Ladisa and Andrea D’Amico.

“Krizia has been one of the first Italian entrepreneurs of the Italian fashion industry to understand the importance of combining innovation and heritage, which are the two elements at the core of the Made in Italy,” said Camera della Moda president and ceo Carlo Capasa.

“She was not easy to deal with, but she had a great kindness,” said Beppe Modenese, honorary chairman of the Italian Fashion Chamber. “The whole Italian fashion system should thank her for what she has done. She was a woman keen to be proactive, and we all have to be grateful to her.”

Milan’s mayor Giuliano Pisapia highlighted the role the designer played for the city where she spent almost all her life. “Mariuccia gave a lot to the fashion industry, but she also gave a lot to Milan, also opening her space to the city by hosting great cultural events,” he said.

Isa Vercelloni, former editor in chief of Vogue Casa and a long-time Krizia consultant, disclosed private aspects of the designer’s character in a speech during the ceremony. “She had a strong personality, but she was insecure at the same time,” she said, revealing for example that Mandelli was scared of any kind of animal and she exorcised her fear by decorating her creations with the images of wild animals.

Mandelli is survived by her husband Aldo Pinto and her granddaughter Carolina Rosi.