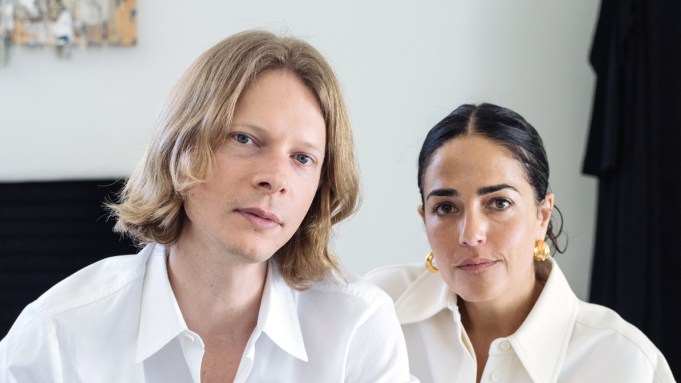 Designers Justin Kern and Stephanie Danan may be products of the Hollywood dream factory, but their take on L.A. fashion is rooted in reality.

Danan, a former movie producer, and Kern, a former screenwriter and fashion model, launched Co in 2011 with a personal investment of $15,000 each, to make elegant clothing they could afford to buy themselves as working professionals. Since then, they’ve homed in on a look that’s California architectural with a feminine touch, offering a seasonal main line with such dramatic pieces as a golden brooch cream wool-satin coat ($1,495) and painterly floral satin shirtdress ($1,895), alongside a less expensive, everyday Essentials collection of sleeveless, tiered cotton sateen dresses ($595), pleated trapunto blouses ($455) and cashmere sweaters ($595).

In 2014, Andrew Rosen, then-chief executive officer of Theory, took a minority stake in the brand, helping to broaden distribution to department stores including Bergdorf Goodman, Neiman Marcus and Nordstrom. Sales are growing 30 to 40 percent year-over-year, nearing the $20 million mark, with more than 100 wholesale accounts. Profitable for three years, the brand is moving into other product categories (bags bowed this month at Barneys New York, and shoes will launch exclusively at Net-a-porter in October).

Now the designers are looking for additional investment to fund the growth and boost their online platform.

“Stephanie and Justin are creative and clever, they bring a fresh perspective to fashion with their backgrounds, and they are not afraid to push boundaries and do things differently,” said Rosen. “Stephanie has a real point of view about the clothes and design aesthetic, and it’s not overdesigned. It’s shown a sweet spot of what luxury pricing should be. The company has tremendous opportunity.”

“Every piece has a purpose and Co offers beautiful quality for an entry designer price,” added Jena Purdie, vice president and divisional merchandise manager of women’s designer ready-to-wear at Nordstrom. The retailer, which launched the brand’s Essentials collection last year, now stocks it in 20 stores as well as online, and will carry it in the Manhattan women’s flagship opening this fall.

Danan, 46, and Kern, 38, who are personal as well as professional partners, met in 2008 through a mutual friend. He was a former model from Tulsa, Okla., and assistant to photographer Mario Testino who came to L.A. to get into film. She was a development executive in a deal with Focus Features who grew up in the world of fashion in Montreal. (Danan’s mother was an accessories designer, and her father the owner of a multi-label showroom.)

The couple started developing films together, and while waiting for projects to be green-lighted they designed a small collection of clothing and had it produced in the same Hong Kong factory Danan’s mother used in the Eighties.

“We had no reference point, we just came from the perspective that I was a working girl, and I needed clothes that were versatile, at a price point that was respectful of my salary and other interests,” said Danan of the collection, which they sell at market weeks in New York, Paris and Tokyo. “At first it was a challenge because you are not part of the community or buzz on the street,” she said of running a fashion business from L.A. “But instead of fighting that position, we embraced it, looked at it as a positive, and created a world where we could be the storytellers we were trained to be…Storytelling is not exclusive to filmmaking; it’s part of selling any good product.”

After the first film was featured on Style.com, the brand picked up its first retail order from Barneys. But the designers didn’t have $200,000 to finance the production. “So we went to Justin’s Oklahoma bank, where he worked during the summers in college,” remembered Danan. “It’s a privately owned, small-town bank that mainly deals with oil and gas — the type of place where a line of credit happens with a handshake,” added Kern.

Barneys put Co on the designer floor, which elevated the brand’s image. “We weren’t placed in the contemporary arena, we were in luxury. When you dropped this collection around some of the best designers in the world but the price point was so much more accessible, and the clothes had refinement to them, the formula worked. After we saw success at Barneys of that formula, we imposed it on everyone,” said Danan, acknowledging that department stores have been a big part of the brand’s rise: “You won’t hear it from a magazine or the CFDA, but the best advice we’ve gotten and followed is having a department store say, ‘Let us do the heavy lifting of spreading the word, and finding your customer and you guys just focus on the clothes,'” said Kern.

Another change maker was Rosen, turned onto the designers by his son Austin Rosen, a music agent and talent scout. “When Andrew walked in, he started with, ‘Why am I here?'” Kern remembered of their terrifying first meeting in 2014. While he blanched, Danan kept a cool head. “It was like ‘Shark Tank.’ We pitched it to him like a movie,” she said.

Although they declined to share how much Rosen invested, they say it allowed them to get a studio in the Arts District, to grow their staff (now at 19) and to fund production. Before that, it was a scary time. “I remember I had all these designer bags from when I was a movie producer and I sold every piece on eBay to pay the rent,” said Danan.

Although the designers have Hollywood stars in their backyard, almost literally (Quentin Tarantino lives down the street from their home, and when he’s working out with his trainer every morning, the voice of Quentin “travels on the wind,” Kern joked), they have mixed feelings about the ascendance of celebrity-fashion culture.

“You have Rihanna who is going to be a designer based on hundreds of millions of followers — why try to compete with that? That’s going to exist and there is a woman for that, but we want the woman who is not for that,” Kern said of the brand’s less-is-more approach.

Instead, Co has carved out a more quietly luxurious niche from the environs of L.A.’s Fitzpatrick-Leland House, a 1936 Rudolph Schindler spec design in the Hollywood Hills that the designers lease from the MAK Center for Art & Architecture to use for creative inspiration and by-appointment shopping. “It’s a way to be a West Coast brand that’s not palm trees and skateboards,” said Kern of the light-filled, cliff-perched space that epitomizes L.A.’s at-home, indoor-outdoor lifestyle. “This house is an extension of what we did with film — how could we create an experience and inject some heritage into a brand that’s only a few years old,” said Kern, adding that he loves the house because “it feels grand without being large.”

They held their first event at the showroom/creative space last September, to celebrate the launch of their fall Essentials campaign featuring seven female power brokers that included director Ava DuVernay, Universal Pictures chairwoman Donna Langley, agent and Time’s Up founder Maha Dakhil, and novelist Rachel Kushner. “They’re influential, not influencers,” said Kern of the group, which they courted with handwritten letters in some cases.

See Also: Exploring the Real ‘Once Upon a Time In Hollywood’ Locations

“Our Essentials business is growing super-fast, and every collection, we have additional newness,” said Danan of the offerings, $475 to $925, which incorporate the brand’s signature volume and pleating details into everyday pieces. “We are having an amazing time designing it almost more than the main collection. It’s where our headspace is in terms of life, clothes, the environment, stripping it all away.”

This fall, Co’s big news is the launch of shoes — “easy to walk in, wearable flats with nice details, stamped leathers, suede, and neutral colors,” says Danan of the made-in-Italy footwear.

While the designers feel proud of what they have achieved, they see a crossroads. “Since initial investment in 2014, we haven’t accepted any more money, and we haven’t gone out,” said Danan. “Investment would allow us not to have cash flow hysteria between April and August each year, it would allow us to grow our direct-to-consumer business, and it would allow us to continue to refine and develop and distribute and democratize our Essentials collection. Our own retail could be in the mix, too.”

Added Kern, gazing around the Schindler architectural gem, “We have a specific idea of what our retail experiment would be, and this was the baby step.”