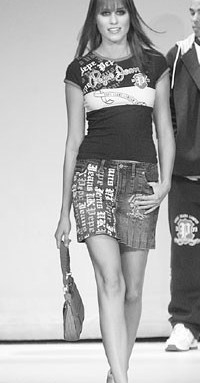 LOS ANGELES — Despite leaving downtown for a site 12 miles east, fashion week at still managed to kick up some action at the fall market, which ended here Tuesday.

Buyers remarked that the runway shows, coupled with the newly unveiled vendor shops at The Bank, Designers & Agents and On Five at the California Market Center, further grounded this city as a go-to marketplace.

“There’s a great energy here, more than in Europe,” observed Giorgia Zappieri, owner of the three-level Zap Milan store in the Italian fashion capital and Gruppo Zappieri Limelight, a distribution company, who split her time between the runway shows and the downtown marts. She took advantage of the high value of the euro against the dollar to snap up what her customers demand — “jeans from the U.S., especially from Los Angeles,” she said. Citizens of Humanity, Chip & Pepper and A.G. Adriano Goldschmied topped her list.

“I’m seeing new things, and that means something after six weeks of buying,” echoed Marilyn Blaszka, co-owner of Blake in Chicago, en route to an appointment at the D&A space at the New Mart.

Even locals got caught up. “It’s the first time I’ve viewed L.A. as a serious place to do business,” said Jill Roberts, owner of two namesake boutiques here. She picked up flapper dresses from Jill Stuart and feminine jackets and skirts in emerald, teal and purple from vendors at The Bank.

Michael Fink, fashion director of Saks Fifth Avenue, spent most of his time at the shows, but longed for the working atmosphere his team reported was happening at the marts. “There have been some outstanding moments so far and that was Petro Zillia, Corey Lynn Calter and Tyler,” he said at Smashbox Studios Thursday night. “But the shows are not geared to retailers. They’re geared toward stylists, celebrities and friends. And it’s not easy to get into the venue.”

This season, there was more to see at the marts than at previous editions. The D&A producers, Ed Mandelbaum and Barbara Kramer, at their venues at the New Mart and Cooper Buildings, said they saw 712 buyers in one day, and estimated that number would triple by market’s end.

D&A traffic also trickled over to the new megashowroom The Bank, and not only for designers Henry Duarte, James Perse and Mason. It was the buzz on the stylish, chandelier-lit decor of the 15,000-square-foot space that drew many. “I feel like I just walked into a Nordstrom or something,” said Robert Keirstead, co-owner of westside Los Angeles shop Dungarees.

Other sub-hubs included the Urban/Suburban show, Agenda, Los Angeles Fashion Exhibitors by PCT and ENK International’s Brighte Companies — all at the CMC. The mart anchor also hosted a fashion show for dozens of its vendors Friday night at the Orpheum Theatre. Denim darling Daniella Clarke for Frankie B. snagged the Fashion Innovator Award/MAFI Award given by accounting firm Moss Adams LLP.

Despite the extra events and Passover on Monday — some showrooms closed in observation — press time reports indicated strong sales.

“It’s been excellent,’ said Lynn Girard, a showroom owner on CMC’s third floor. “By Saturday, I could have done nothing and would have beat last year’s numbers.” Girard said Fabrizio Gianni pinstriped trousers and Metric’s mink-trimmed sweaters were standout sellers.

It was also the moment of the capelet.

“People are jumping out of their cars for it,” teased Charlotte Tarantola, a designer with a CMC showroom. Her version with pompons and vintage buttons was a strong draw, along with cropped sweaters in “Swiss cheese” stitches.

My-Tee’s shoulderless capelet with vintage brooches at the Fille showroom was also a must-have, according to owner Missy Arko. She added her new Los Angeles denim line Horn, which wholesales from $58 to $78, received orders from Nordstrom and Henri Bendel.

Basketball star Arthur Agee signed autographs and unveiled his new Los Angeles-based men’s and women’s line Hoop Dreams at the Urban/Suburban show’s party. Stores picked up the line with the “Control your destiny” tag emblazoned on T-shirts, capris jeans and velour sets. Agee expects the line to do $14 million in first-year sales, a percentage of which will benefit his youth foundation.

Another Los Angeles newcomer was Grail, a line of heavily battered T-shirts. Designer and co-owner Peter Ross treats them like a pair of denim jeans, stonewashing and paint-splattering and grinding them. Partner James Ross said he’s keeping distribution limited to 30 stores in its first year. “We want to build a brand and keep it special,” he said, noting Kitson in Los Angeles and E Street Denim from Illinois picked up the line.

Rock Steady, Stüssy, Truck and Hussy Jr. were among the 50 temporary and permanent vendors at the Agenda Show, which now boasts a showroom space on the new streetwear floor of the CMC’s 11th floor.

“We’re decently happy,” said Aaron Levant, noting 90 percent of its buyers came strictly for the show. “We’re not tapping into the D&A customer, so moving forward we may do this as a stand-alone show.”

Downstairs, about 160 vendors were on hand at Brighte Companies, with reps reporting stronger traffic over the weekend — and buyers committing to orders.

Indies, a Paris line that launched a U.S. presence last year, was filling orders for the new On Sunset store in West Hollywood, among others, that picked up its ethnic street looks, such as a wool coat with cargo parachute pockets and mixed corduroy and pinstripe fabric skirts.

New York-based Julie Haus previewed her ready-to-wear collection before its official launch in May.

The Fifties-inspired line featured suede skirts with rabbit fur hems and herringbone capelets, and wholesales from $78 for blouses to $170 for coats. “Traffic has been mixed but we’re getting the right stores,” Haus said.

Business was consistent for Mark Encinias, owner of the Blueprint Showroom at the Gerry Building, who also opened a 1,500-square-foot showroom for his new T-shirt line called Scam-Co. Buyers there also scooped up OK 47 fashion T-shirts in tunic bodies, and rainbow-weave denim from Marithé + François Girbaud.

“November was a good market,” Encinias reported. “January was stronger, and this one was, ‘Hell yeah.’”