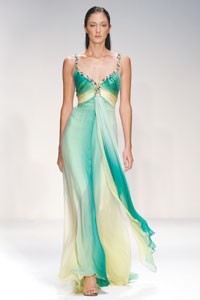 Kevan Hall: Kevan Hall has become a go-to guy for special-event dressing, particularly for the likes of Felicity Huffman, Rita Wilson, Garcelle Beauvais and Kristin Chenoweth. (The latter two starlets were seated in Hall’s first row). The designer titled his collection the “Lost City of Atlantis” and worked the theme with vivid blue and coral chiffon gowns, elaborate shell, pearl and glass embellishments and a water-lily print that looked especially good on a chic trenchcoat. Along the way, he continued his embrace of Fifties shapes, but also showed several younger-looking, softer silhouettes, like the sea-glass ombré silk chiffon gown.

Louis Verdad: Dressed in wide black trousers and a puff-sleeved white blouse, front-row guest Lucy Liu illustrated what is best about Louis Verdad’s ongoing obsession with the Forties. But on the runway, that vision veered into a caricature with heavily lined eyes and Jessica Rabbit gowns. The tricky trousers with the panels and the wasp-waisted New Look dresses — presented with a rambunctious big-band soundtrack — felt more like costumes for a period film than clothes for today. Yet when Verdad tempered the retro leanings, it worked well, as in the sweet, tailored blouses, printed Lucille Ball-type dresses and the glen plaid bikini.