Kitson adroitly harnessed the power of celebrity to build buzz. Now the Los Angeles specialty store wants to parlay that aura to become its own brand. 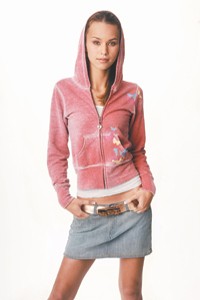 LOS ANGELES — Kitson adroitly harnessed the power of celebrity to build buzz. Now the Los Angeles specialty store wants to parlay that aura to become its own brand.

Ross, who opened his Robertson Boulevard boutique in 2000, said the move into apparel manufacturing “saves me from opening more stores. You’ll get a little bit of Kitson in [your] town without me going in and making the retailers in these smaller towns angry.”

The straightforward collection of denim featuring skirts and skinny and boot-cut jeans, graphic T-shirts and zip-up hoodies will ship starting in August to select specialty stores such as Jeany in Irvine, Calif., Villains in San Francisco, Blake in Portland, Ore., By George in Austin and Blue Bee in Santa Barbara, Calif.

“We’re going to start with specialty stores, then go to the department stores,” said Robert Greenberg, chairman and chief executive officer of Skechers. “We want the brand to have natural growth.”

James Sowins, the designer Greenberg tapped for the brand, said he and Ross considered most premium jeans to be “overdone.”

“What you really want to do is build something clean that you can add onto,” Sowins said. “The jean right now is like the little black dress. I think we go into a dressier time…[Kitson] jeans aren’t silly. They’re beautiful and they’re going to make you look sexy.”

Jeans come in two rises: a flirty, figure-friendly 7 inches and 7-5/8-inch version. Sowins designed a series of Kitson logo T-shirts — primarily for the Robertson Boulevard store — and a clutch of graphic Ts with wholesalers in mind. Available in six styles and four washes and fabrications, jeans wholesale for $75 to $79. T-shirts range from $18 to $26, and hoodies from $46 to $56.

The spring line “will be a little bigger and a little bit more fashion-driven, but it will remain casual and denim-based,’’ Sowins said. “What we want to be is not unlike what [sells] in Kitson.”

Greenberg estimated that Kitson Denim would generate sales of $3 million to $5 million in 2006.

The pairing of trendy Kitson and the mass-appeal Skechers may seem unusual. But Ross said he considers Skechers, which reported net income of $44.7 million last year and does 25 percent of its business in foreign countries, to be the ideal partner.

“With Skechers’ infrastructure, we can go out rapidly to the world,” Ross said. “It’s a big blast…and they’re giving heavy advertising to the brand.”

Skechers has a six-year contract with Ross. “They have to sell $25 million wholesale in the first three years to keep the contract for the remaining three years,” Ross said.

The question of how many specialty stores will buy into another store’s name looms. Reaction from retailers has been mixed.

Fred Levine, co-owner of M. Fredric, a chain of eight boutiques in the Los Angeles area that carries premium denim brands such as True Religion and People’s Liberation, turned thumbs down on stocking the collection — and on starting one.

“I certainly wouldn’t carry another retailer in my store,” Levine said. “And I cherish my vendors. For me to muscle in on their territory is just not right. I think it’s impure, and I think it’s greedy.”

Ross, a fast-talking 42-year-old Canadian-born entrepreneur, makes no apologies. He moved here from Toronto, where he ran a specialty store called Ice that closed in 2003, because of opportunity. His occasional bravado is tempered by a shy streak.

Ross’ relationship with young Hollywood — forged partly by Masha Gordon, a former buyer for Kitson and close friend of Nicole Richie — has linked the store with bold-face names.

“Everyone says that I call the paparazzi when celebrities come in, but it’s not true,” he said. “I don’t need to. Between the meter maid and the Starbucks guys, I would never need to call them. Jesus, it’s L.A. — everyone’s on the take.”

Speculation about Ross intensified last year when he invested in a new paparazzi agency, Sunset Photo and News LLC. “A friend came to me and started this thing,” he said. “It’s so ridiculous to think that I would [use the venture] for photographing celebrities. I don’t need to.…It’s the same as [Los Angeles restaurant] Koi. You know if you go there, you’ll be photographed. Some celebrities come with their own paparazzi. Paris Hilton drove up with nine paparazzi in a car behind her.”

Regardless, Ross embraces the culture of fame.

“That’s what we’re obsessed with, unfortunately,” he said. “Is it good or bad? Well, it’s stopping individual style. But everybody is rubbing everybody’s back. The celebs help us, and they get helped by being photographed.”

Kitson may be the only store in Los Angeles that regularly has a line of people outside on Saturdays waiting for the opportunity to buy items such as the Great China Wall hoodie Jessica Simpson just snapped up or the Stephen Shein rainbow heart necklace Mischa Barton donned for a recent event.

“Girls fly in from China just to shop at Kitson,” said Satine’s Lee.

In the last six years, Kitson — Ross’ middle name — has played a role in launching brands, including Von Dutch, Mukluk shoes and JAM by Jana Feifer, the company behind the Initial Bag.

“I would not be where I am today without Kitson,” said Elliot Hans, who sells jeans, T-shirts and fashion tops from his seven-month-old brand, Literature. “The store is like a p.r. company-celebrity polling event. It’s crazy. It’s a whole lifestyle.”

Kitson ranks first among 80 U.S. stores where Literature is sold. The connection helps give the line credibility with retailers in London, Tokyo and other cities where Hans wants to market. “The first question is: ‘Do you sell in Kitson?’” Hans said.

Tadd Zarubica, ceo and designer of Denim of Virtue in Los Angeles, recalled receiving orders from new accounts at trade shows after buyers saw his jeans at Kitson. “It’s definitely in the top tier because they always have the new brands,” he said.

Ross credited Mimi Kang, his chief buyer, and his fashion-conscious staffers for bringing stylish new brands to his attention.

Skechers’ Greenberg, a veteran manufacturer who founded L.A. Gear in the Eighties, met Ross after opening a Michelle K shoe store across from Kitson.

Kitson posted more than $15 million in revenue in 2005, and Ross said he “will pack in $25 million, easy” this year from the store, a new Kitson Kids apparel unit across the street, a Kitson Men shop a block away that opens in August and his royalties on the Skechers deal, which he declined to reveal.

Marty Bebout, co-owner of the five-store chain Blue Bee in Santa Barbara, said Ross will make Kitson stand out in the crowded denim market. “I know he’s going to have it on every celebrity and shot in every magazine,” Bebout said. “People are going to want it and we’ll sell it.”

One denim designer who asked not to be identified said his primary concern about Ross’ move from retailer to wholesaler was basic: “He gets to see everything and leave a showroom and call [his partners] — and that could go into the [Kitson] line,” the designer said.

In response, Ross said, “I could go into a showroom and tell another company anything, too. That’s just exposure to the world.”