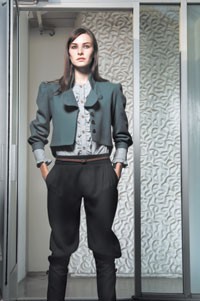 LOS ANGELES — This may be the capital of high-ticket T-shirts and low-slung jeans, but the city’s latest crop of designers is taking a cue from hometown mavericks like Rick Owens and creating a fresh aesthetic that reflects a new side of town. Yet this new squad is still keeping in mind the elements of comfort and sex appeal that personify the quintessential L.A. style.

BON & GING
When Nanette Sullano enrolled in a draping class on a whim last year, little did she know it would lead to a second career. But that’s just what happened to the stylist, and now she and her older sister Grace, a landscape artist, are showing their second Bon & Ging capsule collection, made up of a dozen looks for fall.

The wide-legged pants, shapely coats and knee-skimming skirts may not seem like obvious L.A.-girl fare, but the Sullanos — whose Filipino parents raised them in the multiculti, artsy east side neighborhood of Echo Park — insist that their collection reflects this part of their heritage. “Nanette and I believe if we’re going to design here, it has to be inspired by L.A., by Hollywood,” says 28-year-old Grace, aka Ging. (The sisters named their brand after their childhood nicknames for each other.)

To wit, fall takes its cue from film noir. The Cricket Suit, a slouchy wool gabardine jumpsuit with a plunging neckline, was inspired by Ingrid Bergman in “Casablanca,” while the Looker Dress, à la Rita Hayworth in “The Lady From Shanghai,” is a floor-length wool jersey gown with cap sleeves. Wholesale prices range from $30 to $450.

The line is now carried at South Willard and Ooga Booga, both in Los Angeles. As the designers try to add more retailers to their roster in the coming months, they’re still holding on to their day jobs — for now, at least. “Eventually, we will expand and make shoes and accessories as well as clothes for men,” says Nanette, 27. “We [want] to take it as far as we possibly can.”

DESANKA
There’s something very boho babe about Desanka Fasiska’s design sensibility. Perhaps it’s the beads that dangle from her silk ribbon belts, or the cowl- neck poncho trimmed with felt pom-poms, or the owl and peacock motifs that make frequent appearances throughout her fall collection. But the designer, 28, is also quick to admit that she’s “a sucker” for anything metallic. “Lurex? Sequins? I love it all,” says the Pittsburgh native, who attended Beverly Hills High and studied fashion at the Academy of Art in San Francisco.

Fasiska, who launched her first collection for spring 2002, says her fall looks are influenced by her childhood love for nature. “I am a child of the Seventies, so there is definitely a hippie feel to the collection,” she says.

The designer’s mother, Barbara Fasiska, handles the brand’s accounting while her father, Larry Kashar, keeps an eye on the overall business plan for the company, which is growing at a 50 percent clip each season. The line, wholesaling from $45 to $300, is now sold at 52 stores, including Yellow, Satine, Tracey Ross and Diavolina in Los Angeles, P45 in Chicago, Albertine in New York and Lobby in Tokyo.

EM Productions handles all of Desanka’s sales and press. Last summer, Fasiska moved into a downtown studio, across from EM’s Cooper Building space, where she designs and illustrates all of her own graphics and images, such as the owl and peacock, that appear throughout the line. “I considered being an illustrator at one point, but I love doing it all,” Fasiska says. “I want to do everything one day — from shoes and bags to earrings, everything. But I’m not in a rush. It’s one step at a time.”

EDITH PALM
Russian Constructivism and the American Southwest of the early 1900s might seem to have little in common, but both the art movement and the region inspired Sarah Aaronson’s Edith Palm collection for fall, her third season. “It’s purely a hypothetical meeting point between these two concepts,” says the 23-year-old designer, who also works at the vintage store Resurrection as an assistant to co-owner Katy Rodriguez. “It’s as if [photographer] Alexander Rodchenko came from Russia to New Mexico in 1917.” In fact, Aaronson’s obsession with other times and places also spawned the name of her label, which she chose simply because it “sounds Edwardian.”

Before going to work at Resurrection, Aaronson spent years working in retail at her favorite stores, such as American Rag and Barneys New York. The experience expanded her appreciation for textiles and trims, which now serve as the base of her line, which wholesales from $165 to $700. She uses a Navajo-like cloth that looks fresh when cut into a knee-length bubble skirt, as does an antiquated print of a patriotic eagle motif on a mini smock.

“I want clothes to be different,” she says. “But I also want them to be flattering. Like with the bubble silhouette, I try to get the waist back.” In other words, Aaronson hopes to contribute to the demise of the low-rise look.

So far, the designer, who studied fashion at Syracuse University and Otis School of Fashion, has only sold her pieces to individual fans, but she would like to take her business to retail — to a certain extent. Notes Aaronson, “I’d be really happy with a handful of stores that cater to that customer who doesn’t want what everyone has.”

SOCIETY FOR RATIONAL DRESS
The Rational Dress Society of the late 1800s ultimately failed, but that didn’t deter Corinne Grassini from naming her line of edgy, wearable clothes and shoes after it.

“They were dress reformers who tried to shed the crinoline and corsetry and make clothes more functional. The bicycling costume evolved from them,” says Grassini, who has a bachelor’s degree in sociology from the University of Washington. “I was drawn to the name because of how others can interpret the word ‘rational.’ I’m also not trying to go so, so forward, but I’m attracted to the idea of the balance between comfort and style.”

Grassini, 27, strikes a similar balance between the hard and soft. Her suede boots with straps and buckles are punkier versions of moccasins, while a stiff leather harness wraps around the chest of a goddess-like silk sheath. Both styles have become signatures for the brand in its first three seasons, and quickly sell out at boutiques carrying the line, which include Scout, American Rag and Naked in Los Angeles, TNT in Toronto and Lobby in Tokyo. Wholesale prices range from $100 to $400.

The designer says leather is becoming increasingly integral to her designs, so for fall she added superskinny and wide belts to her bias skirts, slim pleated trousers and hooded smock dresses. She’s also designed three different takes on the leather boot: strappy, flat and a sandal variation.

Grassini recently tapped Showroom Seven to handle the sales of her collection, and she has also hired a production team and design assistant. Good timing, too, because in June she’s setting off to London for a four-month intensive pattern program at Central St. Martins. “It’s all very technical,” she says, “which I’m really excited about.”

BRITJEET
Working as a hostess at hot spot Sushi Roku in West Hollywood, Brittney Cade often appeared in her customized rendition of legwarmers: leather or corduroy pant legs, scrunched down over jeans or with a short skirt. When frequent patron Jeet Sohal, owner of the handmade jewelry line Bare, inquired about Cade’s unique accessory, a friendship — and partnership — was born.

This fall, the pair’s Britjeet label makes its debut with a small collection of luxe accessories cut from soft, lightweight napa leather lined or trimmed in rabbit and kangaroo shearlings. Items, which wholesale from $98 to $438, include “ascots” that wrap around the neck and are based on Edwardian fitches; long leather sleeves, some of which feature snaps along the entire length; a fur bag that doubles as a muff, as well as an oversize hobo bag that rests on the hip. And of course there are the sexy “boot cuffs,” based on Cade’s original creation.

The Britjeet designers may be new to this industry, but they’re wise to the harsh reality that their wares could soon be copied. “We considered doing a cheaper line,” says Cade, 22. “But we decided to keep the quality really high and luxurious. That’s what we want to be known for.”

Britjeet is the second line under Sohal’s Inspired Design Creations (Bare is her first), which she founded in 2003 “with the sole goal of incubating and launching new products,” says Sohal, 25. Her next project? A children’s book series for girls.