Buyers at the Los Angeles International Textile Show sought bright colors and patterns, embroidery and other details, to help banish the retail blahs. 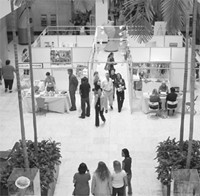 LOS ANGELES — Buyers at last month’s Los Angeles International Textile Show said they were on the hunt for fabrics with bright colors and bold patterns, as well as embroidery, beading and other surface treatments, to help banish the retail blahs.

Vendors said they saw solid action at the three-day event, which wrapped up Oct. 22 at the California Market Center, but acknowledged that price remains a key issue.

D&N Textiles Inc. set up a booth with an Asian theme, and showed a variety of embroidered fabric, including chiffon pieces with rosette strips, as well as a wool-and-acrylic blend that evoked spiderwebs.

“We’re getting lots of good action and a lot of sampling, 30 in the first morning alone,” said Michael Shapiro, president of the Beverly Hills-based company. “We’re seeing interest out there.”

New York-based Michael Miller Fabrics LLC, which primarily serves the home furnishings sector, was trying to pick up apparel customers and had expanded to two booths for that purpose.

“You see the effects of this show three to six months later, once people assess the samples,” said Michael Steiner, president. “We met with people who sell to department stores, who were sampling our Mod prints, dots and daisies.”

For spring 2005 swimwear, Sew Easy Fabrics USA Inc. was promoting its reversible mesh fabrics for pareu skirts in hard-candy color combinations, such as pink and red, orange and yellow, as well as green and turquoise. It also offered stretch fabrics in bright optic colors and animal prints.

“The new styles are all about mixing fabrics and prints for a fresh new look,” said Pearl Ann Marco, owner of New York-based De Marco.

Representatives of French and Italian textile firms complained that the relative strength of the euro compared with the dollar continued to crimp their business.

Phil Fox, owner of Fox Fabrics Inc., which represents five European mills, said that buyers were still eyeing the higher-end fabrics, but added they showed “resistance” to the higher prices.

“We still have that client base, we’re just seeing fewer orders,” he said.

Lush fabrics from Italian firms, such as colored bouclés and jacquards, and silk chiffons and cotton prints with touches of metallic fibers, interested Susan Peterson, vice president of design at contemporary retail chain Arden B.

“We’ve gone upscale with our new Luxe line, so anything luxurious is working for us,” she said. She added, “We’ve bought a lot of artwork at the show so when we manufacture it on silk, it will be our own fresh looks that no one else will have.”

Owner Liz Khader of Blest, a retailer and wholesaler of edgy contemporary wares, said texture and brights were key for her

“We’re looking for colors that are vivid, in your face,” she said. “We loved [French line] Sprintex’s prints over plaid. They were fresh.”

Print madness was a list-topper for Alicia Estrada, owner of Stop Staring, a line of Fifties-inspired dresses. She said she picked up samples from Robert Kaufman Co. for pink and yellow floral prints and sought out Fifties-style polka-dot looks.

“We’re working at the last minute for spring so we’re looking for in-stock companies who can deliver now,” she said.

“There’s a new appreciation for what we do and for our fabrics,” said Meenakshi Advani, president of Rosemoon, a Los Angeles-based company that imports Indian fabrics and finished garments.

Frankie B. owner Daniella Clarke paid a visit to the Rosemoon booth, saying that she’s in the mood for “ethnic looks.”

At Naturally Knits Inc., representative Ann Davis was showing a variety of fabrics made from organically produced fibers, as well as yarns incorporating recycled synthetics.

“It’s more costly, but it’s not cost prohibitive,” she said. “There’s a hunger out there for fabrics that don’t use chemicals.”

The October edition of the show featured a few new components, including a technology section co-sponsored by the California Fashion Association called Technology by Design, where 18 vendors of software tech products exhibited. The show also featured a group of 26 home-furnishings vendors, which exhibited under the Showtime West banner. They were seeking to expand their sales into the apparel arena.

At home-fashions importer Golding Fabrics, interest was strong in the company’s vintage-inspired Western and tropical looks in crepes and failles and washed, textured chenilles.