"People always ask how I will change," said Olivier Theyskens. 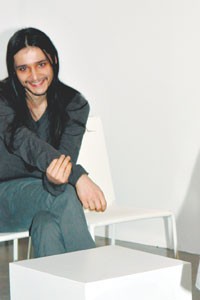 NEW YORK — “People always ask how I will change,” said Olivier Theyskens, referring to his direction for Nina Ricci after his spectacular star turn at Rochas that ended in one of fashion’s speediest and most peculiar divorces. “But I never thought about that. Your inspiration changes.”

In New York this week to present his first pre-fall collection to retailers starting today, Theyskens nevertheless claimed to have played to the classic Ricci girl while designing his collection. The Ricci girl?

“Well,” he admitted at a preview with WWD on Tuesday morning, “maybe I’m imagining her in my head.” Which is fabulous news to those who mourned the shuttering of the Rochas ready-to-wear business because the designer’s debut for Ricci radiates the same refinement and brooding undercurrent with which he so dazzled his Rochas audiences. The line he described as “maybe a little minimalism” features graceful, mannish tailoring and deceptively complicated, often curved cuts — including “half-bias” work — that result in seemingly nonchalant shapes: a black cocktail dress, its off-kilter twists barely perceptible, and suits with precision diagonal seams.

Much of the curvature and the mood of the collection itself was inspired by Theyskens’ study of the L’Air du Temps bottle, with its swirling bowl and stopper of two frosted glass doves. “It’s the ultimate postwar perfume,” he said, and a perfect symbol for what he wants to be seen as a house of contrasts: “The doves are peace and lightness, but they will release into a world of urbanism and gray.”

And, he might have added, commercialism. While Theyskens’ glorious runway shows for Rochas were at most two-note affairs (and his spectacular swan song pre-spring looks will never see the light of retail), his Ricci launch features a relatively diverse lineup with a major emphasis on daywear. Though grounded in his signature gentle sobriety, there are wafts of obvious sexiness, flashes of bold color — reference Reese Witherspoon at the Golden Globes — and even a sassy street moment or two, as in the ribbon-wrapped jeans worn with an undone knitted cape.

As for such a digression from his celebrated propriety, he merely shrugged. “Any designer changes every season,” Theyskens said. “There’s still a lightness and fragility. And I’m building this [collection] maybe from every girl I’ve seen that was cool.” Sounds — and looks — like a chic contrast of the delightfully salable sort.