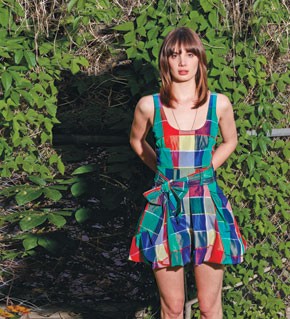 INDIO, Calif. — The Parisian punk rock quartet the Plastiscines earned some major stripes with their rollicking performance at last weekend’s Coachella Valley Music and Arts Festival, but could they pull off a fashion shoot mere hours after their set? No sweat.

For four girls who’ve just played the biggest — and steamiest — gig of their lives, the Plastiscines are remarkably fresh-faced and composed. It’s Sunday afternoon following the French band’s set at the scorching Coachella Valley Music and Arts Festival last weekend. Given the great looks and apparent good taste of the girls — Marine Neuilly, Katty Besnard, Louise Basilien and Anaïs Vandeuyvere — it’s hard to imagine any of them caught in, say, an Amy Winehouse situation. It’s also hard to believe this soft-spoken foursome just served up a half hour of garage punk rock — distortion, fist-pumping and all.

Looking no worse for wear is guitarist Marine, still clad in the slouchy leopard-print tank, Levi’s cutoffs and leggings in which she performed. “It’s like a dream to play here,” says the kohl-eyed 20-year-old, who cofounded the group with her grade school pal and lead singer, Katty, three years ago. “I mean, we’re from Paris,” she says, “and to play at an American festival like Coachella, where loads of the bands we like have played, it’s unbelievable!”

Katty, 21, sporting a Nancy Sinatra bouffant and blue fringe dress, nods in agreement. “We try not to think about the pressure of it all,” she says. And it turns out shopping is the perfect distraction, at least for her and bassist Louise, 20. Case in point: Katty’s fringed frock, which she and Louise found at a vintage shop in San Francisco the day before. On another recent shopping spree, Louise picked up a few baby-doll prairie dresses — “You know, Laura Ingalls dresses.”

“I like to mix everything — Seventies, Sixties and Nineties stuff,” says the statuesque Louise, who joined the band after meeting Marine and Katty at a Libertines show. “I really like Patti Smith’s style and Debbie Harry’s style, but I don’t have one specific influence.” Of course she appreciates la mode Parisienne, but it’s a little staid for her taste. “It’s way easier to dress as you want [in the U.S.],” she says. “In Paris, people are stylish, but in a classical way. Like, Katty wouldn’t wear that on the street in Paris,” Louise explains, pointing to her friend’s electric blue frock.

Katty, the chanteuse with the dress in question, also functions as the group’s in-house stylist, which is fine by the rest of them. “We don’t try to be really stylish,” quips drummer Anaïs, who’s wearing a retro Nike halter and denim shorts from her favorite British High Street chain, Primark. Anaïs, 20, is the band’s third drummer in three years, and met the girls via MySpace last year. “I saw that they needed a new drummer, so I said, ‘Why not?’ and I messaged them,” she says.

Notes Louise: “Before meeting Anaïs, we tried other drummers, but it never worked out.” But don’t mention that “Bootylicious” revolving door known as Destiny’s Child — “No!” says Louise, “It’s more like a ‘Spinal Tap’ thing!”

The Plastiscines’ debut album, “LP1” (Virgin France), recorded with then-drummer Zazie Tavitian, is a 13-track, Ramones-style romp with a dose of gamine charm. The band’s playful, sing-song-punk sound, with tracks such as “Pop In, Pop Out!” and “Zazie fait de la bicyclette,” has garnered comparisons to the Gainsbourg-fueled yé-yé music of the Sixties. But, adorable and guileless though they appear, the girls, whose second album is in the works, are all about the rock ‘n’ roll.

“I don’t really like [fashion] shoots,” Louise claims during a pause in shooting for WWD. “We’re not models, we’re a band. I mean, we’re girls and people like the idea of girls in a band, but I think this kind of a thing…it’s a little boring.”