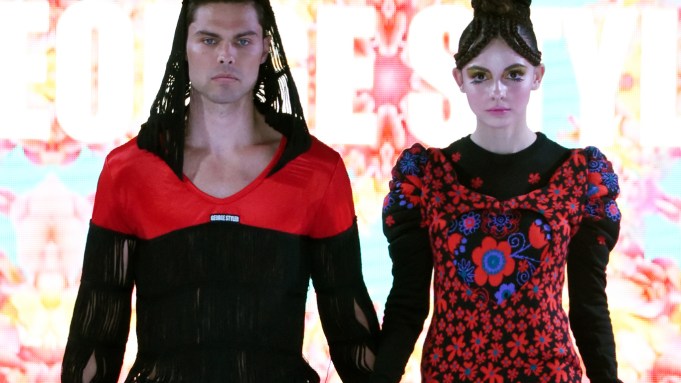 It was a bizarre, fantastic spectacle.

The show notes described designer George Styler’s collection for men and women as knitwear inspired by fairy tales and nature. On the runway, that translated into sequined  jumpsuits in a rainbow of colors, layered under knitted unitards just as colorful for femmes. An image of the “Mona Lisa” surrounded by a floral pattern comprised the design on some. Other looks included a holographic mini dress; drop waist, pleated skirts; and a black wool jacket that echoed 80s punk via a 3-D effect that gave off the appearance of spikes. For men, there was knitwear mixed with denim, drop-crotch pants and sweaters with patterns of various hashtags: #swag, #fashion, #love and so on.

It all built up to a finale — though somewhat delayed — with a ballet dancer channeling the spirit of Martha Graham, who managed to somehow both glide and contort her way down the runway.

“I spent a lot of time experimenting with different kinds of yarns, textures and patterns,” Styler said. “My work promotes and expresses multiculturalism because I like to combine styles from different parts of the world.” The London-based, Serbian designer is in fact an avid traveler. He said he picks up items that are sometimes woven into pieces — like many of the baubles and jewelry sewn into some of the unitards and dresses — to create ornate collars that reference Africa, Asia, South America, the Balkans and even a little California.

“My collections are very colorful,” he added simply. Colorful, indeed. Like seeing the contents of a kaleidoscope explode.