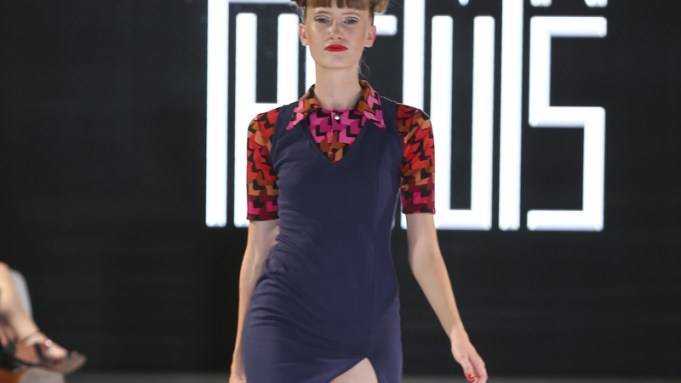 James Flemons took a sharp turn down a new path for fall.

The Los Angeles designer, who in the past has contented himself with muted palettes and tweaking classic silhouettes for his unisex Phlemuns line, relied heavily on bold patterns and colors for fall.

Models strutted their way down the runway to the music of Deee-Lite, the early Nineties music group Flemons used as a muse of sorts for the season. “The main inspiration was the music…and just their personal style all combined together, clashing prints and patterns and then their take on the Nineties, inspired by the Seventies,” Flemons said.

As if combining patterns weren’t enough (one look featured two khaki-yellowish plaids over a shocking pink-orange-red print), the designer also created the illusion of multiple garments within a single piece, such as a shirt composed of several layers or a midi-length knit dress with a vest. There were also the minidresses that looked like jumpers layered over long-sleeved tops and a plaid peasant-style dress, soft wool puffer jackets and vests, reworked denim and peg-leg pants.