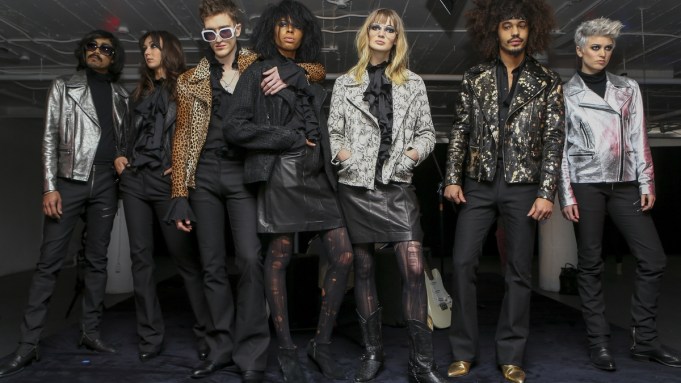 Edwin Hayes motioned to someone to stop fiddling with the floor-to-ceiling drapes. It was filtering sunlight into the downtown Los Angeles loft space he intentionally had kept dark to present a modest fall collection for his label Sav Noir during Los Angeles Fashion Week.

Hayes hosted a “Brunch with the Brand” show in which models stood on a makeshift stage wearing a mash-up of looks which, the founding designer of the unisex line said, drew inspiration from the Sixties, Seventies and Eighties. From the bell-bottoms and ruffled blouses to the ripped nylons and Chelsea boots, it mostly screamed glam rock.

But it was the moto jacket that took center stage, providing the common thread of the collection. Hayes interpreted the edgy classic in a variety of materials, including a Malhia Kent tweed, lambskin, snakeskin, black-and-gold embossing and leopard-printed pony skin. “It’s for everyone — every gender, ethnicity [and] size,” explained the designer, adding each jacket represents a different expression of himself.

The collection continues the evolution of Sav Noir, which began in 2010 as a streetwear brand selling a simple T-shirt, into a premium label for what Hayes calls the fashion-forward underground.

“When I first started [the label] was grassroots; it’s still grassroots,” Hayes said. Explaining his decision to take Sav Noir in a more high-end direction, he noted, “I’m not going to sit here and do streetwear for another 10 years. I already knew the vision of where this brand needed to go.”