Moore From L.A.: How Should We Feel About Looting? It’s Complicated

“What good is it for me to have a business where I sell clothing and make money off people who are constantly living in a state of fear for generations?" said Bobby Kim, owner of streetwear brand The Hundreds in L.A.

Cleanup efforts by volunteers is seen in Los Angeles following a night of protests over the outrage for the killing of George Floyd on June 1.

The killing of George Floyd might have been the spark, but 400 years of systemic racism is the fire fueling peaceful protests and violent clashes consuming the nation — and hitting America where it hurts, in the capitalist eye of the retail store.

In my L.A. neighborhood, the Fairfax District, Saturday’s Black Lives Matter protest was incredible. There were all ages and races raising their voices and signs, kneeling in solidarity — and caring enough to come out at personal risk during a pandemic. The crowd was diverse, united in its cause: “Latinos 4 Black Lives,” “Your Fight Is Our Fight,” “Breonna, I Will Fight for You.”

“When I looked out over my rooftop at the sea of young America, I believed these young people are going to make a change,” said designer Kevan Hall, a founder of Los Angeles’ Black Design Collective, who watched the protest from the roof of his atelier on Beverly Boulevard.

Then the energy shifted.

The protest was blocking a busy commercial intersection near The Grove shopping center and Whole Foods, and it was an unlawful assembly. There were confrontations and shouting. A city bus was hijacked, but the driver unharmed as protesters climbed on top. As the police presence grew, the crowd became tense. Officers in face shields wielding batons tried to pen people in on one block. Then vandalism of police cars, answered by rubber bullets, answered by arson and looting.

By early evening, looting had spread to Nordstrom at The Grove; to Rodeo Drive, where people carried armloads of handbags out of Alexander McQueen, and to Melrose Avenue, where The RealReal, Rebecca Minkoff and Vivienne Westwood were gutted, and the nameplate on the Marc Jacobs store was tagged with the names of martyrs George Floyd and Sandra Bland. Nike and Adidas were hit. On Sunday, the Santa Monica Vans store, REI and Patagonia, too, along with many others across the nation. 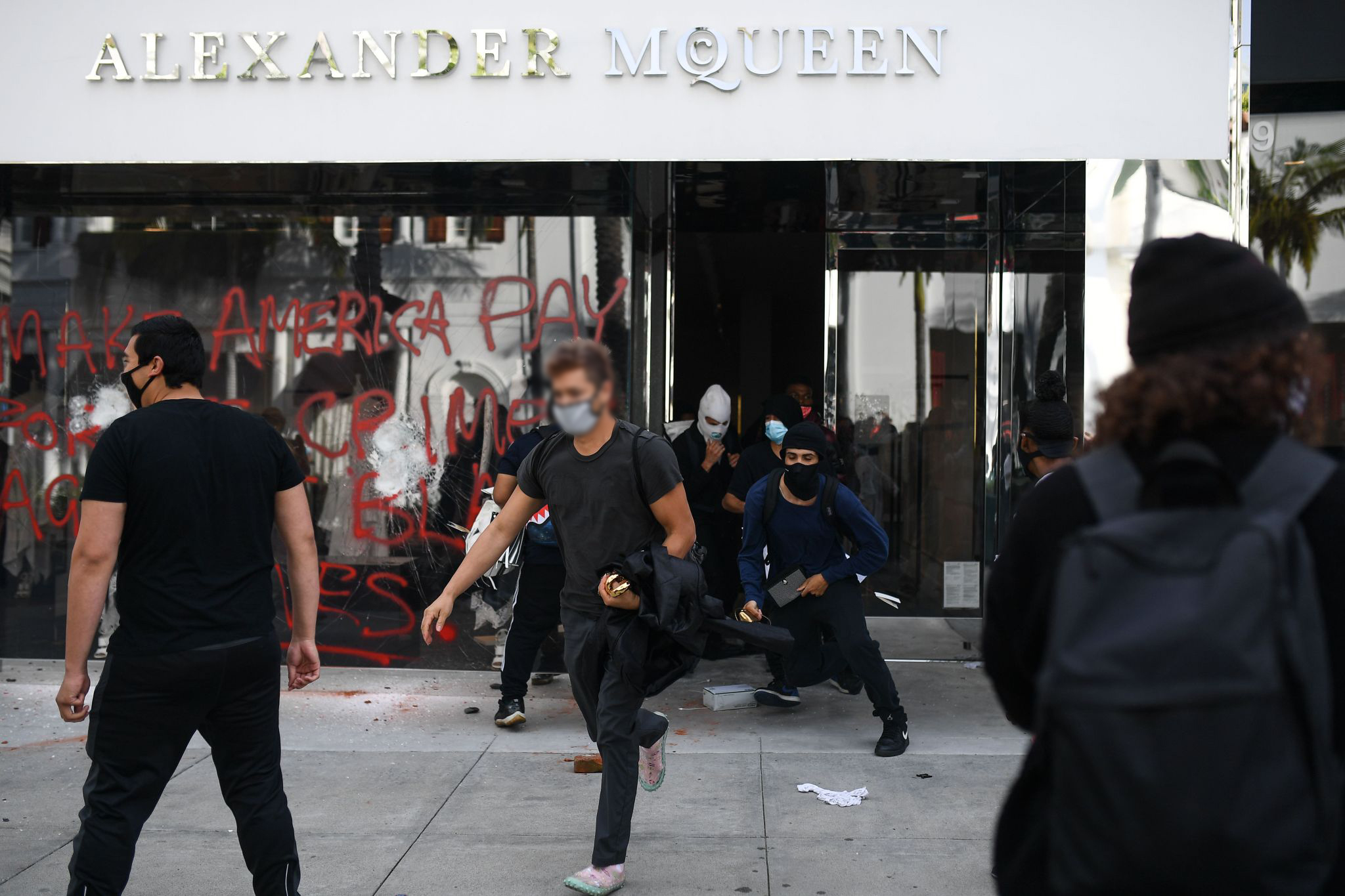 “I hate to see it move in that direction,” said Hall. Many are opportunists trying to hijack the message and legacy of George Floyd, he said. (In some cases, the looting was organized: Cars could be seen on news video pulling up to Target stores, as young men and women of all colors came out with loads of stuff, in what looked like curbside shopping.)

“I’m exhausted and furious,” said Doris Raymond, whose influential La Brea Avenue vintage store, The Way We Wore, was looted, with about $45,000 worth of merchandise stolen by an organized group caught on video by a bystander. “The offenders were mixed race and I hate that these crimes are feeding the fires of racism — which is probably their intent,” she said.

But beyond opportunity, there is also anger at a society marked by income inequality that has meant the difference between life and death during the coronavirus, a society that too often values products over people. After Virgil Abloh’s RSVP Gallery store in Chicago was looted, he wrote on Instagram Stories, “If it heals your pain, you can have it…” 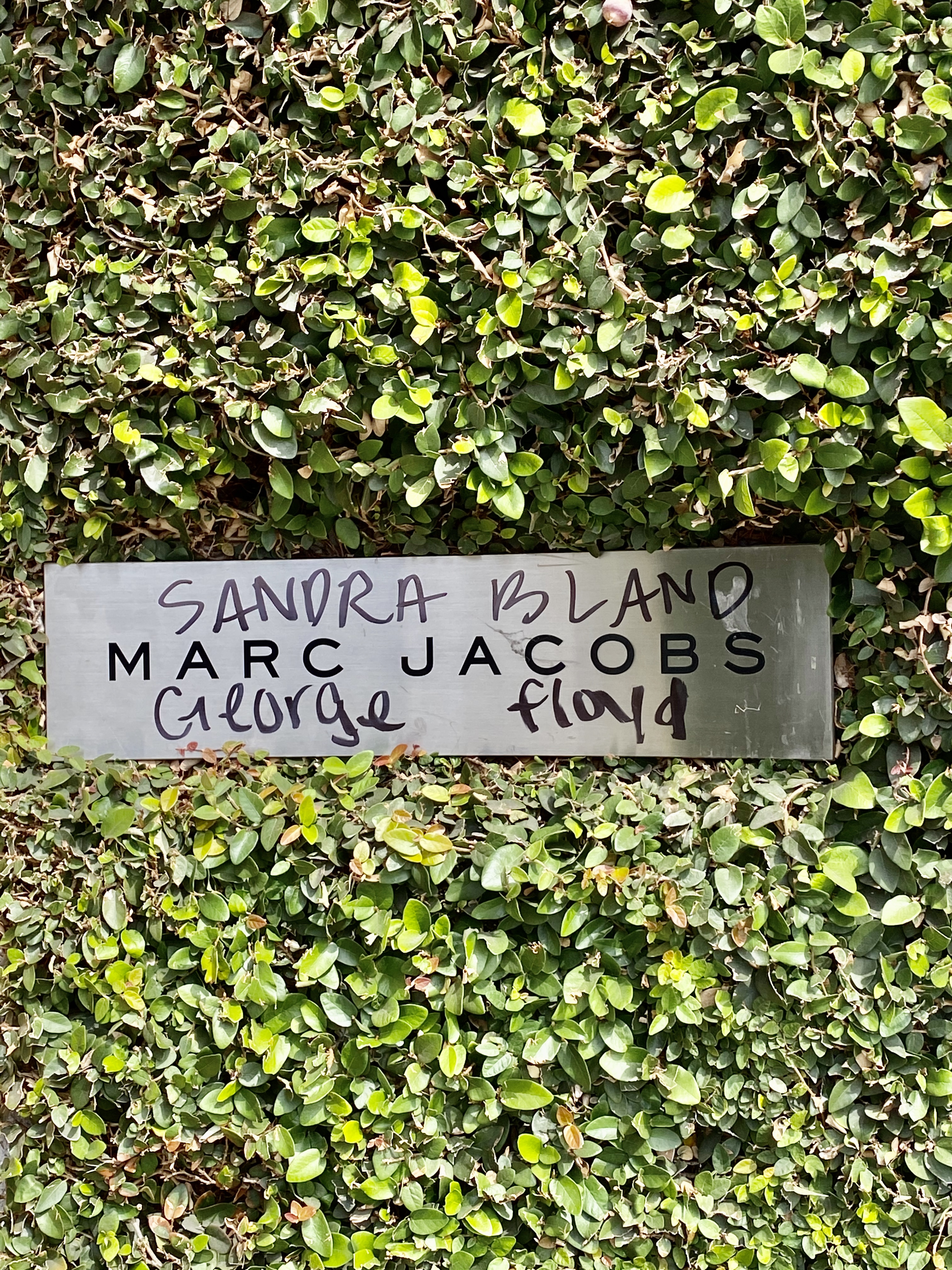 Over the weekend, I posted photos to Instagram of some of the damaged storefronts and was cautioned by L.A. designer Jasmin Shokrian not just to post about what was becoming “a distracting focus.” She made me think.

On social media, in some cases, I saw more outrage about looting than over the death of Floyd. Which is probably one reason for some looting in the first place — the perception that a designer handbag, limited-edition sneaker or store window is worth more than a black life.

“Don’t understand the protest? What you’re seeing is people pushed to the edge,” athlete, businessman and activist Kareem Abdul-Jabbar wrote in an op-ed in The Los Angeles Times. “The black community is used to the institutional racism inherent in education, the justice system and jobs. And even though we do all the conventional things to raise public and political awareness — write articulate and insightful pieces in The Atlantic, explain the continued devastation on CNN, support candidates who promise change — the needle hardly budges.”

Maybe now the needle will budge — now that the fight and the consequences of inaction and injustice are in every neighborhood and shop, not just in South Central L.A., like in 1992, when the victim of police brutality was named Rodney King.

“Even if you bring the fire to my doorstep, I will stand in it with you,” Bobby Kim, owner of streetwear brand The Hundreds wrote on Instagram Sunday after he watched Fairfax burn and his store be vandalized. “Don’t ever stop protesting,” he urged his followers.

Kim received backlash, even as he acknowledged his own Asian American privilege. Unlike some small, POC-owned business owners on Fairfax who rely solely on income of their shop to survive, he can afford to let protesters burn his down, and in a time when looting means there may be fewer stores and jobs to go back to with the pandemic.

“What good is it for me to have a business where I sell clothing and make money off people who are constantly living in a state of fear for generations?” Kim told me. “I don’t condone anyone hurting anyone physically or financially, but at the same time I’m not shocked or surprised,” he explained, adding that when he first saw the protests in downtown L.A. on Friday, he knew they’d be coming to Fairfax. “If anything, I’m surprised it doesn’t happen more. How has this not happened every week? Americans and the black community have been so patient waiting for this change. They’ve asked nicely for 30 years and hundreds of years before that.”

Maybe now the needle will budge. 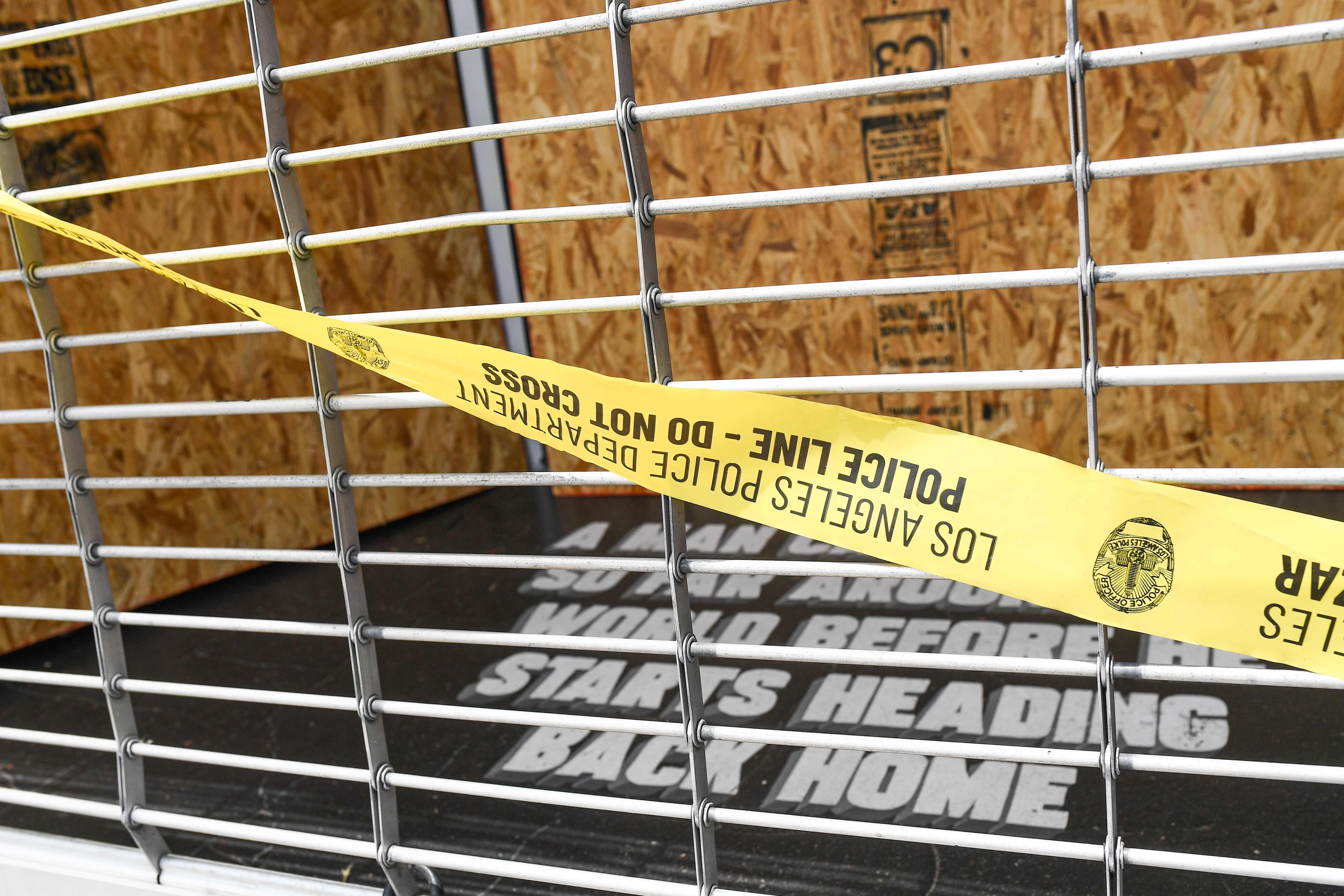 “As much as some Angelenos and Americans want to ignore it…you can’t…it will affect you and your business, and if you don’t think it will affect you, we will make it affect you,” said Kim. “There is something beautiful about watching the ‘hood move into the West Side. There is going to be tension and friction, there are going to be people not understanding each other, but now you see L.A. — all of it.”

Racism and consumerism are intertwined, he added, noting that he’s not surprised many of the items being looted are sneakers, Bearbrick toys and luxury handbags. “We have indoctrinated young people to think that is the only thing that matters. I’m a part of that problem, too.…I do what I can to educate and enrich them with other things like art and books. But at the end of the day, what I do for a living is convince people they need something they don’t really need.”

There’s no difference between designer streetwear and something more affordable, “but I convince them there is,” Kim continued. “Where do you expect them to run? Of course they are going for sneakers…we told them this is the only thing that matters and if they don’t have it, they are not enough. They were never able to afford it, we put it so far out of reach…now they can afford it, they’re taking it.” 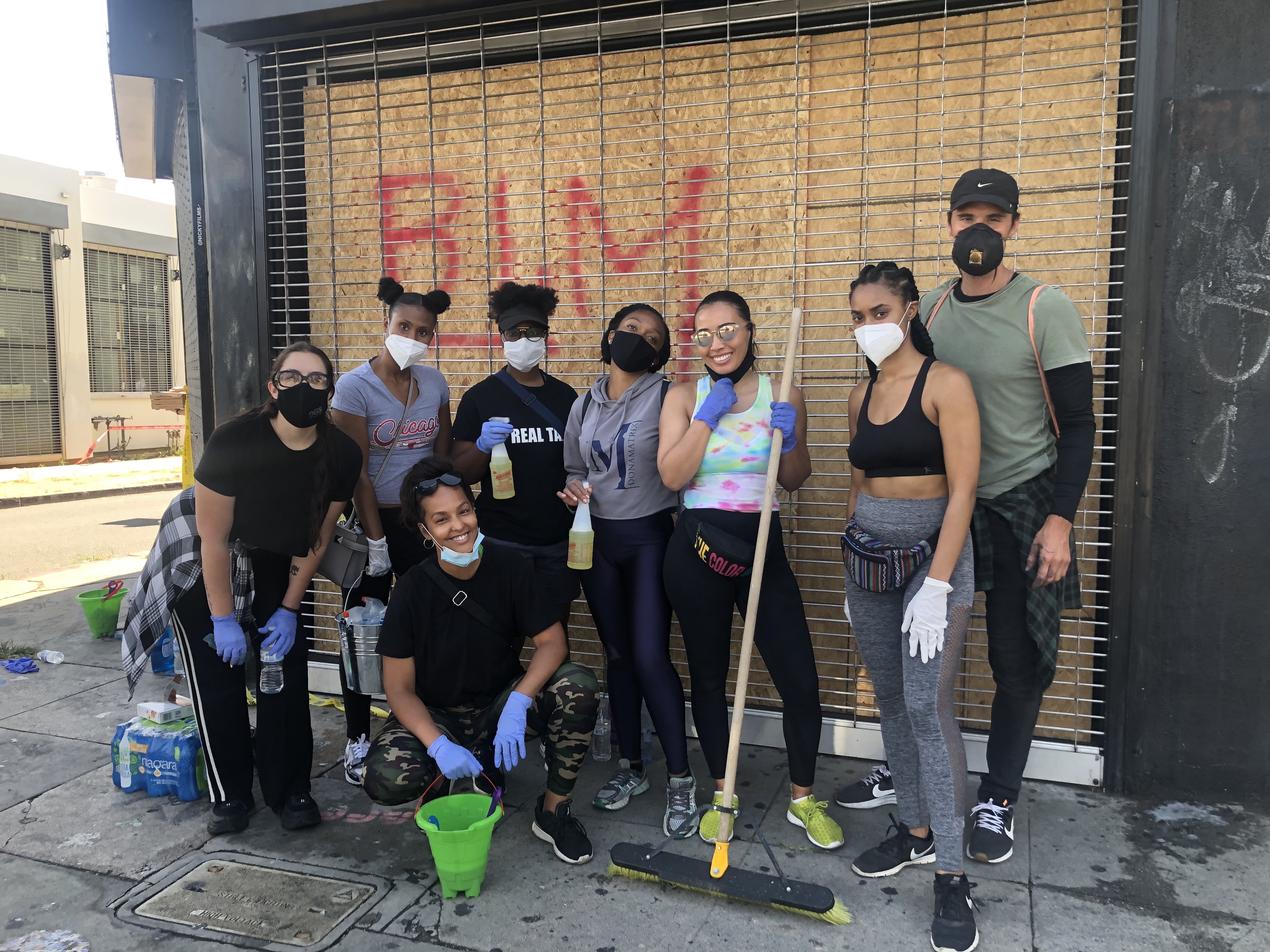 While police brutality hasn’t changed, a small silver lining is that the people fighting it have, said Kim, who was a 12-year-old growing up in the L.A. suburb of Riverside, Calif., during the 1992 riots. “One of the inspiring things about watching the protests today is there is more solidarity and allies. It’s not black people vs. the world, there are helpers and other voices, it isn’t just just their issue. We have finally realized their issues are our issues, these are human issues.”

To that end, on Sunday, hundreds of volunteers came out across L.A. to help businesses clean up, including freelance food journalist Jackie Iadonisi at The Hundreds on Fairfax.

“I don’t condone people breaking stuff and stealing stuff, it’s wrong and takes away from the cause. With that being said, I understand it. I’ve seen that peaceful protests don’t cause any reaction. No one talks about it, it fades away, then it’s time for another protest. I hate having to say it, but I was kind of happy that something got burned up and broken,” she said, with the caveat about opportunists, including some YouTube stars who used the mayhem as a backdrop to go out and tag buildings and try to look cool for their followers.

The morning after protesting on Fairfax on Saturday, Iadonisi and her friends showed up with brooms, sponges and detergent in hand, working alongside all ages and races to clean up the community.

“All of this could be avoided if we properly serve justice,” she said. “If those police officers got arrested, it could be solved that easily. But they’d rather see everything burned down.”