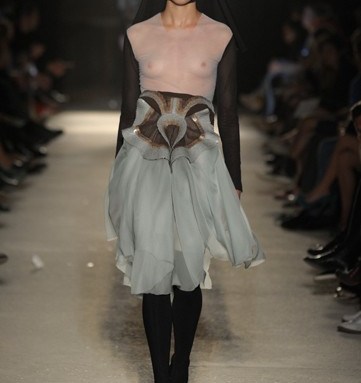 HYERES, France — While it offered everything from fashion shows and exhibitions to flamingo sightings, the annual International Festival of Fashion and Photography here is first and foremost a platform for emerging talent, allowing young designer hopefuls access to major fashion figures.

“For me, the fabrics are always the starting point,” said Peckre, whose looks were accessorized with stark black head scarves resembling nun’s habits.

Fellow French designer Céline Méteil, who has worked for John Galliano and Balenciaga, won the new Première Vision prize, valued at 10,000 euros, or $14,800, plus the audience award. Méteil, 32, applied boxy, envelopelike structures to airy designs that evoked classic white blouses. Méteil used a stiff, sheer jaconet fabric as a nod to crinoline and muslin used for garment prototypes. “It’s a reference to my experience working behind the scenes. I was always fascinated with the muslin prototypes,” said Méteil.

Méteil’s collection, plus one look from each of the other nine finalists, will be showcased at Première Vision Preview New York in July, with a special area due to be dedicated to Méteil at the salon’s main show in Paris in September, in the framework of Première Vision Pluriel. “At this stage of their career, young designers need access to contacts and fabrics; it’s also an opportunity for mills to carry out research and development,” said Philippe Pasquet, PV’s chief executive officer. “It’s also a bet on the future [for mills]. All of the big designers passed by this stage, with big ideas and no budget.”

Other festival highlights included an exhibition by Raf Simons, “History of My World,” featuring objects transplanted from the designer’s private collection into a space in the villa, including works by Pol Chambost and Ron Arad.

Kane said he particularly admired the women’s wear entrants for their sensitivity to detail and construction, while acknowledging the challenges faced by young designers today. “The pressure is really tough, always having to come up with new things and every season more and more collections. Even at only five years into my business, people expect the same from me as they do a luxury brand, even though I don’t have a huge maison. It’s still, like, 17 people,” he said. “I think for young designers these days that pressure is immediate.”

According to Simons, young designers today tend to over-think their game plan too early on, with regards to fashion shows, image and press. The fashion landscape has changed “drastically” compared with when he started out in the mid-Nineties. Before joining Jil Sander as creative director in 2005, Simons was head professor of the fashion department of Vienna’s University of Applied Arts.

“[To the students], I’d be like, ‘Maybe you should first think over how are you going to communicate, when the client comes in, what I’m doing here is not what someone else is doing, or, I’m doing things in a different way and I’ve made it attractive for you to get into it.’ And, sometimes I’d say that to them and they’d go, ‘Huh?,’” related Simons, adding that he started out showing collections in galleries in Paris’ Marais district, using photography or documentary-style youth-oriented videos to communicate his vision. He staged his first runway show four seasons in, when his business was “building up decently,” with around 50 clients.

“We didn’t even have a press agent until a couple of weeks before the show, that’s how naïve we were,” laughed the designer.

Proenza Schouler’s Jack McCollough and Lazaro Hernandez, who were also on the jury, agreed that having a voice, something new to say, is more important than ever. “There’s just so much noise.…You know, you go on Style.com and you scroll down and there are so many young designers.…Everyone’s competing against each other in a way,” commented McCollough, adding that they feel that they are in a kind of in-between stage right now, nine years into their business, where they still need help and people are asking them for help.

They play mentor to one of their former interns, Joseph Altuzarra, for instance. “It’s not such a time of fabulosity anymore.…People aren’t getting paid so much as the likes of Valentino in the Eighties, with their servants and their antiques. These are different times. We’re working under different conditions here,” McCollough said.

Referring to the recent fall of designers like John Galliano and Christophe Decarnin, McCollough added: “It’s a result of the pace of things right now, the [pressure] on the designers is extraordinary, and I think that when you don’t have control of the ship, people can demand these things, they can demand pre-collections and pre-pre-collections, and shows and men’s and then women’s.…One person can’t do all that. One of the beauties of being a young designer is that we can say no.”