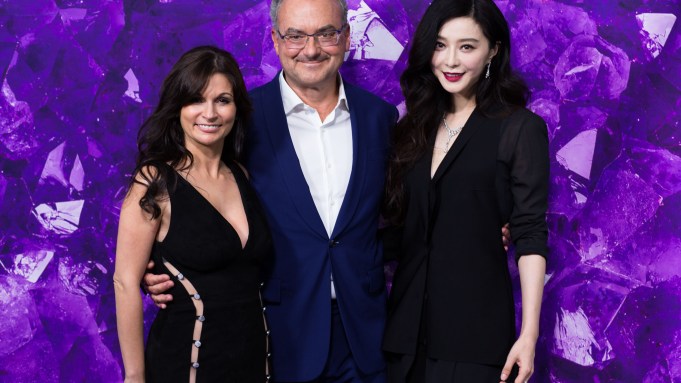 MACAU — Chinese megastar actors Fan Bingbing and Hu Bing arrived at The Venetian casino on Thursday evening for an unusual night that saw the city, known most for its baccarat, roulette and poker tables, host the global debut of the La Perla spring 2018 show.

Usually overlooked in favor of Hong Kong or Shanghai, the former Portuguese colony upped its fashion credentials with the debut of the rock ‘n’ roll-inspired collection, displayed in the main lobby of the casino which had been blocked off to passerbys. The 200-or-so guestlist included model You Tianyi, actress Chen Shu, and rapper Brant.B, who dined at tables running alongside the runway where models such as Natasha Poly sporting bedazzled eyes and slicked-back high ponytails marched to electric guitar riffs.

The show marked the start of Sands Macao Fashion Week running Oct. 19 to 24, the city’s first such event. Designed to jump-start spending at the two Las Vegas Sands-owned properties — The Venetian and The Parisian Macao — the week also scheduled special showcases from Seven For All Mankind, EQ:IQ, Evisu, Karen Millen, Max & Co. and more.

Silvio Scaglia, the Italian businessman who owns both La Perla and modeling agency Elite World, mingled backstage chatting with model Liu Wen but declined to do interviews. Scaglia’s name has featured in the headlines after he was acquitted late last month in a money laundering trial involving one of his other firms, Fastweb. Local Italian media have also been reporting that La Perla, which he acquired in 2013, is up for sale, something Scaglia has firmly denied.

Originally founded in 1954 as an innerwear label, La Perla is attempting to expand deeper into ready-to-wear and other lifestyle categories, although it’s had considerable zigs and zags along the way. Its current creative lead Julia Haart was installed last August after a quick tenure by Pedro Lourenço who lasted half a year. Lourenço came into the position after the role had been left empty for six months, replacing Emiliano Rinaldi who led the brand for a year and a half. The business side has seen changes too with the tycoon’s Millennial daughter Chiara Scaglia, who oversaw the business in Asia, departing the company recently.

Speaking before the show, Haart said her clothes focus on expressing inclusiveness and female empowerment. “The La Perla woman is every woman,” she declared, pointing to a commitment to create women’s wear that not only look good but feel good, too.

“When I first became creative director, people told me comfort is a dirty word. They said, ‘do not use the word comfort in fashion.’ It’s a code word for non-fashionable and ugly,” Hart said.

“To me, I am the connection to Ada Masotti,” Haart continued, referring to the La Perla founder. “Between us there have been no female creative directors. She was really not only an icon but she was a feminist of her time. She started a company in the fifties. Women were not starting companies back then. They were not heads of fashion houses.”