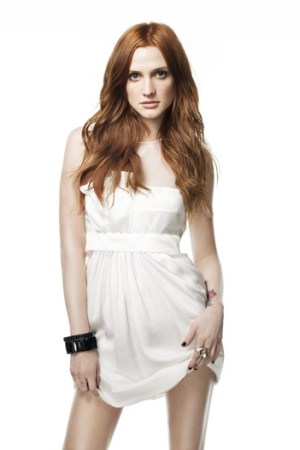 A mention of the Nineties television hit “Melrose Place” conjures images of a tiled courtyard building populated by pretty young things. Though no such structure exists on Los Angeles’ real Melrose Place — a tree-lined street, which is the site of Oscar de la Renta, Carolina Herrera and Chloé boutiques — the fictional dwelling has been faithfully re-created in a Van Nuys, Calif., soundstage on a street full of auto-repair shops and warehouses. This is where the cast of The CW network’s newfangled “Melrose Place” (which will premiere Sept. 8) gathers one sunny afternoon to film a scene around that familiar swimming pool. A new group of twentysomethings — played by Stephanie Jacobsen, Jessica Lucas, Katie Cassidy and Ashlee Simpson-Wentz — has moved in, ready to stir up scandal, sex and, hopefully, some fashion trends.

“I think it’s a good time for Los Angeles to be recognized in terms of design,” says costume designer Emma Trask, a celebrity and editorial stylist who uses local resources such as Erica Davies, Louis Verdad, Lloyd Klein, Cosa Nostra and Elise Overland in addition to Jean Paul Gaultier, Chloé, Dolce & Gabbana, Balenciaga and Lanvin on the show. “The city is full of different looks, and each girl was set up to be very different stylewise.”

“This is a whole new playing field for me,” says Hong Kong-born Jacobsen, 29, who has had more experience with sci-fi, and appeared in “Battlestar Galactica” in 2007 and “Terminator: The Sarah Connor Chronicles” in 2008 and 2009. Her “Melrose Place” character, Lauren, is a medical school student by day and, to pay for tuition, a call girl by night. “I think she is probably the most practical of the cast, and her style reflects that,” Jacobsen adds. “The way she dresses is very simple, classical and functional.” Lauren’s daytime wardrobe consists of cardigans, shirts and shorts. For evening engagements, she keeps it sweet in dresses like Michelle Mason’s white lace strapless mini and Balenciaga’s pale pink and blue sheath, and for the requisite prime-time love scenes — those of her practicing the world’s oldest profession — there are also doses of Agent Provocateur and Calvin Klein lingerie thrown into the mix.

But at the moment, Jacobsen is wearing her hospital scrubs and prepping for a daytime scene with her roommate Cassidy. Across the room, one of the writers approaches the director, Fred Toye, about a different portion of the show and says, “We have to tone down one of the love scenes. It’s kind of over the top.” To which the director responds, “Why? There’s no intercourse.” “Well, they don’t want any…writhing.” “Got it — no orgasms,” Toye says with a nod.

Cassidy’s character, ruthless Hollywood publicist Ella, is the opposite of Lauren. “She’s crass, she’s bitchy, she’s bossy,” says Cassidy, 22, a soft-spoken blonde who’s the daughter of singer David Cassidy. “She knows what she wants and she’ll go to any length to get it. She’s the one you love to hate.

“What’s cool about my character is we can push the limit with her clothes, and she can get away with it. We’ve tried some pretty amazing numbers,” she adds, referring to Ella’s tight lemon yellow Versace suit, fuchsia Yves Saint Laurent sheath, and a batwing-sleeved chiffon Louis Verdad gown. For today’s pool scene, she wears a cutout one-piece La Perla swimsuit with a floor-length, sequined chiffon Alberta Ferretti caftan and jeweled Chanel sandals. “This is just Ella’s hanging-out-by-the-pool-looking-fabulous outfit,” she says with a laugh, as a production assistant hands her a robe to keep her warm on the air-conditioned set. “When I’m not working, I literally wear boyfriend jeans and a T-shirt. I don’t do my hair and makeup…whatever.”

Arguably, the least scandalous Melrose Place resident is elementary school teacher Riley, played by Lucas, 23, who describes her character, who is engaged to fledgling film director Jonah, played by Michael Rady, as “warm and kind and compassionate.” She is, Lucas notes, “sort of the mom of the group.” Riley’s style is typical Los Angeles boho chic: bright prints, flared jeans, braided belts and patterned handbags. “It’s the complete opposite of my style in real life, which is more classic,” says the Vancouver native, who last appeared on another remake, “90210.” Lucas showed up on set in a pair of navy blue drawstring Anthropologie pants and a turquoise T-shirt. Her costume that day was the obligatory bikini worn under a sheer paisley Sigal A. tunic.

Simpson-Wentz, 24, who plays the show’s youngest character, Violet, is still trying to define herself and her style. “She comes to L.A. from the Midwest to find her mother [who turns out to be one of the original show’s characters, Sydney Andrews, played by Laura Leighton], and all of a sudden she’s thrown in with the sharks,” says Simpson-Wentz. (She herself is a mother of an eight-month-old son, Bronx, with her husband, Fall Out Boy’s Pete Wentz.) Plaid shirts, denim shorts and men’s wear-style boots by Fiorentini and Baker are Violet’s staples, but Trask says her style will evolve as Violet gets a makeover from Ella and a job at a nightclub. This will allow for more adventurous choices, like Cesare Paciotti stiletto ankle boots and a vintage Versace chain-mail skirt worn as a dress. “I like that there are different kinds of girls on the show that the audience can relate to,” Simpson-Wentz says.

However, that may be the only aspect of the show about which this can be said. Threesomes, murder and adultery are just a few of the sudsy story lines. Not to mention absurdly affordable prime real estate. “Riley’s apartment would be five grand or more to rent, and we are all struggling,” says Lucas of her character’s sprawling Melrose Place pad. “But that’s not what people want to watch. People don’t want reality; they want a good show.”