While Christian Lacroix seems as if he can’t wait to divorce himself from LVMH, his position as Pucci's designer is more like all in the family. 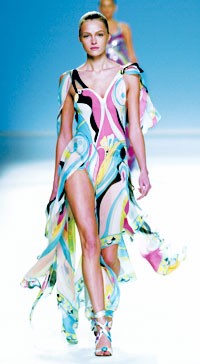 In the coming weeks, the designer is expected to finalize negotiations with the Falic Group, the travel retail firm that bought his signature fashion house from LVMH Moët Hennessy Louis Vuitton last month.

Without commenting on the likelihood of an agreement, Lacroix hinted that he is attracted to the “human scale” of the family-owned firm. “I am positive,” he said in an interview last week. And while Emilio Pucci remains part of the LVMH empire, it is perhaps its similar dimension that explains why Lacroix has thrived there as its designer, even as his signature brand languished under LVMH.

Indeed, in a separate interview, Laudomia Pucci, Emilio Pucci’s daughter and the image director of the house, used precisely the same term — “human scale” — to laud the brand’s petite boutiques in an age of megastores. Its forthcoming location in Capri, for example, is a jewel box of a site, not much bigger than a studio apartment.

Still there is nothing small about the successful marriage of Pucci and Lacroix, who shows his sixth collection for the house in Milan today. Sales in 2004 almost doubled, and revenue has more than quadrupled since 2000.

That makes it one of the fastest-growing luxury brands in Europe, let alone within the vast constellation of names at LVMH. The French group does not break down figures by individual brands, but market sources estimate Pucci’s sales at about 30 million euros, or about $39 million at current exchange, and that the brand is profitable.

“[Christian’s] artistic vision has been key to the success of Pucci and it remains key,” said Catherine Vautrin, chief executive officer of Pucci. “For us, it’s a marriage that works and we want to go forward.”

Lacroix’s contract with the house runs through March 2006, and both parties seem keen on extending a fruitful relationship.

Indeed, Lacroix is eager to see the high-flying Florentine house grow even faster. Given the strength of prints in fashion right now, he’s convinced it’s the opportune moment to blow out Pucci men’s wear — and why not home furnishings? He would also like to see more jeans and streetwear in the collection, since “life has changed” and he sees young urban women in cities like New York mixing “wannabe Pucci or even fake Pucci” with denim and sportswear.

“I’m not a marketer,” he said. “I just want to be sure the future [of Pucci] is set on the right tracks.”

To be sure, Europe’s fashion conglomerates have had a less-than-stellar record managing some of their smaller fashion properties. Lacroix’s fashion house, which never turned a profit in 18 years, is perhaps one of the most dramatic examples.

Asked to account for why Pucci took off so quickly even as his signature brand struggled, the designer frowned in reflection and pronounced: “I’m very known for the mixing of prints, but any prints. We still have to define what is the Lacroix print. Pucci is something more recognizable.”

It’s also a “matter of momentum,” he continued. “There is perhaps less negative history [at Pucci].”

Indeed, Lacroix has not been shy about the fact that he was happier under Pucci’s roof than his own in recent years. Financial constraints meant he had to forgo the ready-to-wear runway at Lacroix for three seasons, and he also lashed out at LVMH for what he considered misuse of his name.

“When I work on my own story, it’s more autobiographical, so perhaps it’s more anguished,” Lacroix mused. “When I’m at Pucci, it’s more like being a mercenary. I don’t mean that in a bad way. Of course, I put my soul into the work, but it’s not as dangerous as with my own signature. Plus, it’s a brand I have loved since I was a child.”

Lacroix said Pucci’s new collaboration with skiwear firm Rossignol SA exemplifies the energetic nature of the brand. Even though it’s yet another design assignment to juggle amidst myriad others, “it’s a real pleasure,” he said. “It’s not a burden on the shoulders.”

Laudomia Pucci concurred with Lacroix’s self-analysis. “You see him happy when he’s with us and that’s important,” she said in an interview. “He has a tremendous passion for what he does for us. Christian has a fabulous knowledge of fashion and culture and enormous respect for the company.”

Founded in 1947, Pucci became an icon in the Sixties for its wild, swirling heraldic prints on silk jersey. It was acquired by LVMH in 2000.

Since then, Vautrin has added a formidable accessories business to give a lower-priced entry point to the brand and to capitalize on a high-margin category. Handbags, small leather goods, hats and gloves are all produced in house and account for roughly 30 percent of sales. Shoes are licensed to Rossi Moda; silks to Mantero.

Italy and the U.S., traditionally the strongest markets for Pucci, remain so, accounting for almost 60 percent of the total. But Japan is growing quickly, thanks to two freestanding stores and two shop-in-shops that bowed last year.

This year, Vautrin plans to further expand the Japanese network and add another U.S. location. “Its potential is very big,” she said. Vautrin declined to pinpoint 2005 growth but said it would be double-digit.