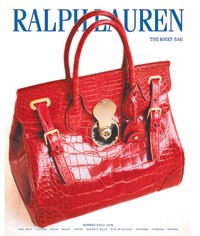 As cities around the world prepare for their respective fashion weeks, New York-based Luxury Institute decided to examine wealthy consumers’ experiences with fashion brands. In its Luxury Customer Experience Index — billed as the first study of its kind — the company asked its respondents which fashion designer brands they purchased in the past 18 months, among a series of other questions. “Part of the trick for a luxury brand is to grow stores and product lines — but not break the brand’s image with that growth,” said Milton Pedraza, its chief executive officer. The firm surveyed more than 1,000 female consumers, who averaged 45 years old, with an average annual household income of $681,000. The company also provided WWD with actual insight and comments from the luxury consumers.

1. POLO RALPH LAUREN
Percentage of women who say they purchased an item from this designer over the past 18 months: 40.8
“People know this brand,” said Milton Pedraza of the Luxury Institute. “They’ve done a great job of expanding themselves and reaching out to more consumers.” The Ricky bag, seen to the left in a spring ad campaign shot, is an example of the company’s strategy to expand its luxury accessories collection this year. For the three months ended Oct. 1, Polo Ralph Lauren reported total revenues of $1.03 billion, up 15 percent from $895.6 million compared with the same period the year prior. The company attributed strong results to a turnaround in men’s wear sales, a strengthening in the women’s business in the Black Label and Collection lines, along with stellar performance from Ralph Lauren Media’s Web site, polo.com.

2. COACH
Percentage: 38.9
“This is an upscale brand that is so good with customer experience,” Pedraza said. “They’re constantly in dialogue with their customers, and the products are upscale, yet affordable.” The New York-based company reported on Tuesday that revenues in the three months ended Dec. 31 jumped 22.2 percent to $650.3 million from $531.8 million last year. In November, Coach unveiled its Rodeo Drive flagship: Modern and light-filled, the 3,365-square-foot door reflects Coach’s new direction, which is being applied to all of its 248 doors in North America. The Rodeo door is the company’s fourth in the Los Angeles area. The $1.7 billion accessories firm also unveiled the redesign of its New York flagship in November. The store, at 10,000 square feet, is the company’s largest — all the better to promote the Coach lifestyle. “The brand never goes out of style,” said one respondent to the survey.

3. CALVIN KLEIN
Percentage: 30.3
In November, Phillips-Van Heusen, Calvin Klein’s parent company, posted third-quarter results that beat Wall Street’s consensus estimate. Mark Weber, chief executive officer, said the Calvin Klein licensing business continues to be a key driver in the growth of the company. “The reality of this brand is that, though it might be more mainstream than others, wealthy consumers know this and will continue to buy the products,” Pedraza said. For spring, the brand has chosen to turn up the heat once again with some sizzling black-and-white underwear ads. Model Natalia Vodianova, who has been the face of Calvin Klein since spring 2003, is featured alongside Swedish hunk Freddie Ljungberg, who has been the exclusive model for Calvin Klein Underwear since fall 2003 and is a midfielder for the Arsenal FC soccer club in the English Premier League.

4. BURBERRY
Percentage: 17.3
“Burberry has expanded its classic colors and shapes, while maintaining a luxurious brand persona,” Pedraza said. In January, Burberry Group plc announced retail sales increased 21 percent to $201.2 million, from $177.3 million, in the third quarter ended Dec. 31. During the period, retail sales accounted for 68 percent of total revenue. WWD reported that Burberry ceo Rose Marie Bravo, who will step down in July, said that “core outerwear,” “reinvigorated classics” and a strong start to the spring season were key to driving the business in the period. Top sellers were shorter trenchcoats, quilted jacket styles and duffle coats in shades of baby pink and blue. The Haymarket handbag also helped propel sales. One respondent described the brand as “timeless and durable,” while another pointed out that “the products, quality and service are consistently high.”

5. LOUIS VUITTON
Percentage: 12
The popularity of this brand continues to soar: AOL reported in December that Louis Vuitton maintained its number-one rank as the name drawing the most inquiries last year. Also for 2005, revenues for LVMH Moët Hennessy Louis Vuitton’s fiscal year rose 11.4 percent to a record $17.32 billion. The fourth quarter revealed “exceptionally strong” sales of Louis Vuitton leather goods, Tag Heuer watches and fine champagnes. “We are fairly optimistic for 2006; our markets are showing no signs of slowing down,” finance director Jean-Jacques Guiony said during a conference call in December. Louis Vuitton’s spring advertising campaign features supermodel Gisele Bündchen (seen to the left). Photographed by Mert Alas and Marcus Piggott at a private home in Ibiza, the images are colorful and graphic. Designer Marc Jacobs had wanted a “glossy, summery” feel to the images after a fall season of dark and sober clothes.

6. CHANEL
Percentage: 11.8
When Coco Chanel herself said, “Luxury is something you can do without, but don’t,” she had perfectly described her customer. That customer has stretched from the Ladies Who Lunch to the young and trendy who share an addiction for luxury goods and whatever Karl Lagerfeld has planned for the next season. The brand also carries a devoted following: One consumer surveyed commented, “I have been pleased with this brand for years.” The designer’s current advertising campaign has tapped young starlet Selma Blair as the new face of Chanel Vision (seen in the advertisement to the left). The elegant and sophisticated customer also can still connect with Nicole Kidman, who appeared in the recently relaunched commercial for Chanel No.5 perfume, the most expensive minute-for-minute film in history at the cost of 18 million pounds, or $32.1 million at current exchange.

7. PRADA
Percentage: 11.7
While many designers are returning to minimalism, Miuccia Prada never left. This exclusive brand has appealed to women with a more intellectual and mature style ever since it entered the luxury market in 1979. The Italian luxury goods firm is projecting its profits will grow by an average of 23.5 percent a year over the next five years, while its sales will increase by an average of 3.2 percent annually, reaching $1.83 billion by 2010, according to a document Prada issued to bankers last summer and released to WWD in October. The growth will come from increased focus on the core brands of Prada and Miu Miu, as well as labels such as Azzedine Alaïa and Car Shoe. The $40 million flagship in SoHo has been closed this week because of a five-alarm fire on Saturday night in its building.

9. ARMANI
Percentage: 8.8
Giorgio Armani, the everlasting favorite of celebrities such as Michelle Pfeiffer and Jodie Foster, portrays his timeless designs and brand name with his 2006 advertising campaign. WWD reported this month that the exclusive designer will be concentrating on advertising in fewer, more mainstream magazines. The company, which has experienced incredible success in the men’s fragrance market, plans to introduce Code for Women perfume this year for the “sophisticated, straightforward woman.” It will be backed by a $5 million ad campaign that will break in the April issues of 20 magazines.

10. FERRAGAMO
Percentage: 7.4
Salvatore Ferragamo, known as the “shoemaker of the stars,” recently was awarded his own star on Rodeo Drive. One woman surveyed said the brand had “great designs and lasting quality.” The company’s latest ad campaign, shot in black and white, depicts the luxurious lifestyle of the target consumer. Dana Gers, vice president of marketing, said, “The look and feel is distinctive, accessories have been highlighted in color for a clean, contemporary look. It’s still Ferragamo essence, but the creative is different from what we’ve done in the past.” WWD reported on Wednesday that Salvatore Ferragamo Group posted a 12 percent jump in 2005 sales and forecast double-digit growth for 2006, citing strong momentum in the U.S. and Asia. Sales rose 12 percent to $718.8 million at average exchange rates — those results exclude the 2004 and 2005 sales at Emanuel Ungaro, which Ferragamo sold last year.