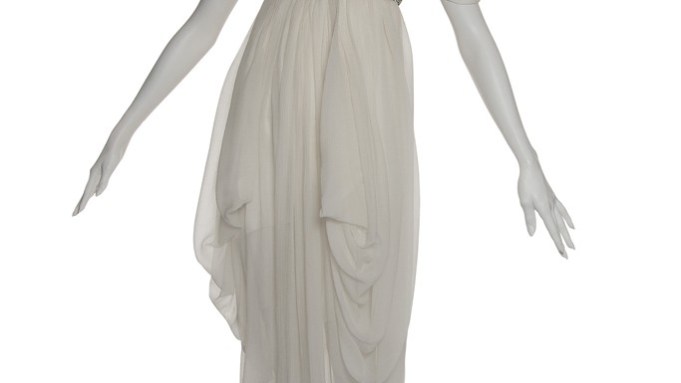 LONDON — Lady Gaga broke a record at auction on Wednesday night, paying $133,075 for an Alexander McQueen dress from the wardrobe of Daphne Guinness that went under the hammer at Christie’s South Kensington here.

The singer bid by phone from the U.S. for the ivory silk tulle empire line gown from the Girl Who Lived in the Tree collection from fall 2008, according to industry sources. It was the highest price paid for a McQueen dress at auction.

Meanwhile, a Europe-based bidder paid $208,003 for a portrait of Guinness shot by Mario Testino for the March 2008 edition of British Vogue. It was the highest price paid for a Testino photo at auction.

The auction, to benefit the Isabella Blow Foundation, which Guinness founded after the death of her friend in 2007, raised $744,285 or four times the presale estimate. The fashion stylist and muse committed suicide after years of battling depression.

“I should have put more in the sale,” said a buzzing Guinness the morning after the auction, which she did not technically attend. “I was hiding at Christie’s on King Street [across town in St. James’] in my friend’s office. I’m not very good at social gatherings — I’m slightly agoraphobic.”

Shy or not, Guinness was busting with excitement during a telephone interview with WWD on Thursday. “This auction was the culmination of a plan, the completion of a circle. I wanted to celebrate Isabella — she was one of the most interesting funny people I have ever known.

“And I feel so great that all of these things will go on to have lives with other people. There has to be a certain flow to life — you can’t hang on to things. The sale was so freeing.”

The Isabella Blow Foundation will offer support to young designers and fund research into depression and mental illness. Guinness also confirmed that Blow’s wardrobe — which she purchased in 2010 shortly before it went to auction — would go on a world tour, beginning at Central Saint Martins next year.

And while Guinness declined to confirm early rumors that Lady Gaga had purchased the McQueen dress, she did pay tribute to her pal. “She was an absolute brick, so supportive during the whole process,” she said of Blow.

Guinness said she’s hoping to divide the money “fairly evenly” between the two different causes, and added that she’s all fired up to raise more funds for the foundation.

“All of this started out as a shot in the dark, but I’m glad I followed by gut instincts,” she said of the sale.

“I really hope the foundation can help students and people who are struggling with mental illness. I’m not Mother Teresa, but I hope we can help people to know that life is worth living.”