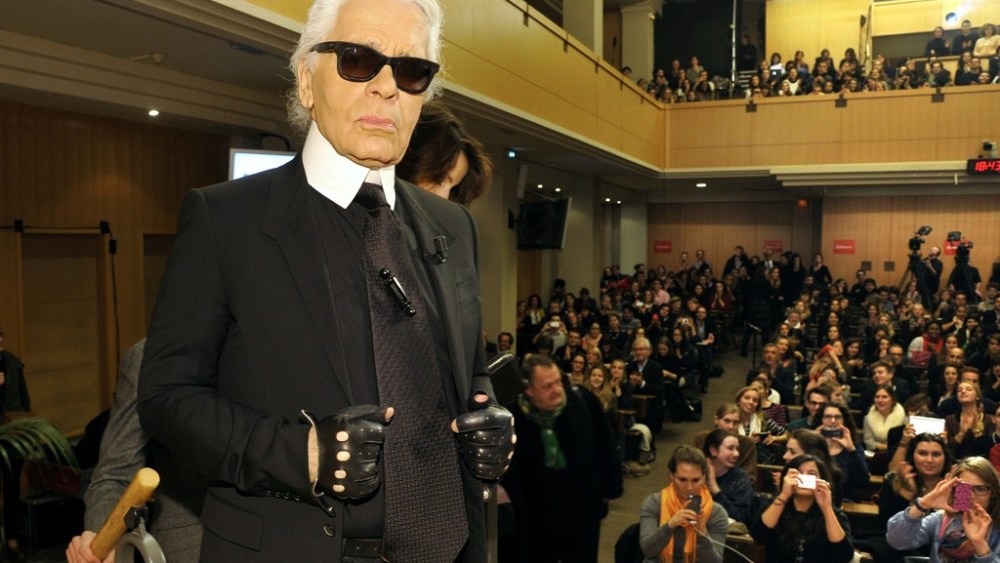 PARIS — With his mile-a-minute parlance, sprinkled with salty humor and snippets of German philosophy, Karl Lagerfeld would make a riveting — if exhausting — professor.

On Tuesday, some 400 students, mostly in communications, sat listening intently as the fashion designer delivered a master class at the elite Paris school Sciences Po, riffing on everything from his love for paper to his aversion to fashions “that go straight from the runway to a museum.”

Seated behind a black podium, he responded to questions from Françoise-Marie Santucci, editor in chief of Libération’s fashion supplement Next. Behind them was a projection of the Left Bank school’s emblem, sketched out by Lagerfeld in orange and black crayon.

“I was born with a pencil in my hand,” he said, urging students to pursue a profession that’s a pleasure, not a chore.

Born into a well-to-do family in Hamburg, Germany, Lagerfeld recounted why he did not pursue a university education, instead plunging himself into the Paris couture world.

“I never studied because I didn’t have time,” he said, detailing how he won a fashion prize in 1954 from the International Wool Secretariat alongside Yves Saint Laurent and Colette Bracchi, immediately earning him an offer to intern at Pierre Balmain.

Lagerfeld’s stern yet endearing mother, whom he referred to repeatedly during a wide-ranging address, told him to pursue the opportunity “and if it doesn’t work out, you can always go back to school.”

Of course, the designer would go on to construct one of the most spectacular fashion careers in recent history, rising to become the couturier at Chanel — a position he’s held for 31 years; the designer of ready-to-wear and fur designer at Fendi — 48 years and counting, plus the creative head of his signature fashion house, in addition to a long career designing for Chloé and numerous other brands, not forgetting his photography, publishing and filmmaking activities.

Monitors flanking the stage flashed with Twitter posts throughout the nearly two-hour session as Lagerfeld unleashed a stream of witticisms and instructive anecdotes. Here, some highlights:

• On fashion in the early days: “Couture in the Fifties was hardly as glamorous as it is today. The studios and workshops were sinister, sordid places and people were paid poorly — horrible, really. Even the studio wasn’t a stimulating place. In the days, there were no photocopiers.…Chanel’s studio today, by comparison, looks like a science fiction movie.”

• On online retailing: “Today, it is amazing how you can buy online. That said, it is interesting to go to boutiques. I like to see the things that I buy. Luxury retailing is still something that should be done in real life.”

• On his daily rituals: “I tend to prefer mornings for designing. And always after reading the papers, because I like to be informed. Paper is at the root of everything. Fashion starts with a sketch and ends up with photos. I don’t like computers for designing. It’s a craft. You have to know how to draw. I sit at several drawing boards at home, listening to music. Time flies. Then, I am served lunch. In the afternoon, I go distribute my work, my portfolio under the arm, like a young student.”

• On his passion for books: “I am a bibliophile, but I’m not one of those people who collect rare editions. Yes, books are beautiful objects, but I’m more interested in what’s inside, to nourish my knowledge.

“I love this quote from Horace Mann: ‘A house without books is like a room without windows.’ At any given time, I’m usually reading 20 different books in several languages.”

• On his five years at Jean Patou: “After three-and-a-half years at Balmain, I was offered to head Jean Patou. The house was a sleeping beauty — more sleeping than beauty. I would do two collections of 60 looks per year. There I learned things that one couldn’t learn today. You know, in the Twenties, Patou employed some 3,000 workers, and it was as important as Chanel. There were some people who had worked directly with Jean Patou. They taught me techniques of the Twenties that were very different. In the Fifties, a look would start with a bustier with boning and people would add things on it. At Jean Patou was a man named Mr. Gabriel who taught me everything about fabrics. France in the Fifties was the country with the most beautiful fabrics in the world. Mr. Gabriel had all the books of samples. I saw extraordinary things. The head seamstress, Mrs. Alphonsine, educated me in all kinds of techniques, which are different than the ones used today.”

• On the heritage of Coco Chanel: “Camellias, pearls, tweed, black and white, I took these elements and exaggerated them. I made things that have never been in her collections, but that could have been. I don’t go to the archives.”

• On change: “I change over the time. I don’t have a fixed position. If you do in fashion, you are dead. You have to adapt to the times.”

• On getting inspired: “Just like appetite, which comes with eating, it’s only work that gives you ideas. That’s why I don’t believe in these people who spend two months on a beach trying to come up with an inspiration. Fashion is a full-time job. And if you want to do this job seriously, forget the part-time.”

• On school: “Education is great, but each one needs to find his calling and educate himself. School is not enough if you don’t give it 300 percent.”

• On music: “The tragedy of my life is that I don’t play the piano.”

• On corporate life: “I have the good fortune to work with people who are 100 percent behind me, and I am 100 percent in line with them.

“To me, hierarchy doesn’t exist. Everyone is as important, the ceo or my cleaning lady.”