According to Karl Lagerfeld, "bridge" is a term for dentistry, not fashion. 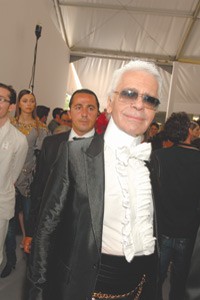 PARIS — According to Karl Lagerfeld, “bridge” is a term for dentistry, not fashion.

That’s why Lagerfeld supported Tommy Hilfiger Corp.’s decision last month to shut down the fledgling New York-based Karl Lagerfeld label, returning the focus of the business back onto his Paris-based designer collection.

“Fred Gehring was right to close it down,” Lagerfeld said, referring to Hilfiger’s new global chief executive officer, who took over last May following the sale of the U.S. company to Apax Partners. “This organization couldn’t work.”

In his first interview about the closure, the designer said he understood Gehring’s more pressing need is to reposition the Hilfiger brand, which has been struggling in America. And he added that he ultimately took issue with the positioning of the new Karl Lagerfeld contemporary line, which he had hoped would become a big-volume business, but whose prices approached the bridge zone.

“It was much too expensive. Today there is Gap, Zara and H&M,” said Lagerfeld. “My name is a kind of household name. I am supposed to be on jeans and T-shirts.”

Still, his new brand owner is brimming with confidence about the potential of the Lagerfeld brand — even though he stopped short of ruling out an eventual disposal.

Lagerfeld’s collection business, to be rebranded Karl Lagerfeld, “continues to hold tremendous potential. The name Karl Lagerfeld carries a worldwide reputation and represents the ultimate in fashion and glamour,” Gehring told WWD, adding that he decided to “turn back to where the business was at the time of the [Hilfiger] acquisition in 2005 and focus solely on growing this first line to its full potential.”

Asked if Apax plans to maintain ownership of the Lagerfeld brand, he replied: “It is Apax’s objective to develop this business opportunity to its full potential within the TH Group, but of course Apax will always consider new strategic options that may arise.”

In the meantime, Gehring said he would consider launching another Lagerfeld second line in the future. Venturing into other licensed product categories and international markets are also among possible growth tacks.

Lagerfeld’s New York collection — billed as contemporary — is to be discontinued following its fall 2006 retail debut, a closure that affected 25 jobs in New York, including that of Ann Acierno, president of new business development, and Melanie Ward, creative director.

That was not the final retrenchment for the brand, however. Gehring confirmed the Lagerfeld Gallery boutique on Rue de Seine here, which bowed in 1998 as a showcase for the designer’s signature collection, would shutter this month.

He said that decision had been taken by the previous management and was “based on the size of the Paris collection, which on its own does not justify maintaining a complete store of this size.”

The Paris closure will leave Lagerfeld as a purely wholesale business. Gehring declined to give figures, but listed some key accounts for fall-winter: Henri Bendel, Intermix, Ultimo and Tracey Ross in the U.S., as well as Harvey Nichols in Dubai, Estnation in Tokyo, Molinero Costura in Madrid and Zenta in Paris.

Neiman Marcus, which along with Bergdorf Goodman had carried the Lagerfeld contemporary line since spring, declined to comment on its sales performance.

“Neiman Marcus was disappointed in the news that the Karl Lagerfeld collection would not be going forward, but will be interested in any new projects that this amazingly talented designer undertakes,” said Ken Downing, Neiman’s senior vice president and fashion director.

Gehring said the potential to create a sizable collection business remains “significant. This segment is not primarily driven by volume, but serves an essential role of setting the direction for all activities on a diffusion or licensing level to follow this position. We are looking at all options to grow the business, using the collection as the anchor point.”

After Hilfiger bought the Lagerfeld trademarks last year for an estimated $30 million, the company moved swiftly to build the business, staging a major fashion show in New York last February to close fashion week. Lagerfeld and Ward mixed his Paris and New York collections on the runway, and received largely positive reviews.

More interested in sketching dresses than defining business strategies, Lagerfeld said if his signature business is well run, “I have no problem.”

However, he noted he has plenty to keep him occupied, having long-term contracts as the designer of Chanel in Paris and Fendi in Rome.

Although Lagerfeld had originally intended to show his signature collection in New York this September, he said time constraints would mean he now will show it in Paris in October. However, he said he is mulling alternating showing between Paris and New York in the future.

Gehring said Hilfiger’s European organization “will continue to materially support the business as required.” He added the brand would continue to place its Lagerfeld-lensed ad campaigns in fashion magazines.