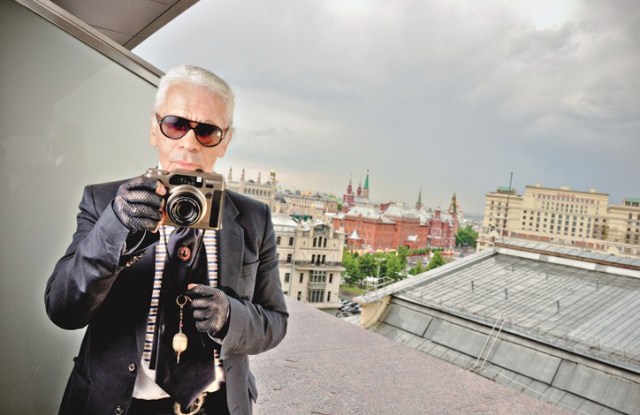 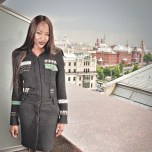 MOSCOW — On Friday, Naomi Campbell was wearing a czarist-inspired outfit and perched on the balcony ledge of a ninth-floor presidential suite here. Behind her, jutting from roofs, were gold onion domes and red Soviet stars. Makeup artists buzzed around, their feet almost over the edge of the precipice.

This story first appeared in the June 1, 2009 issue of WWD. Subscribe Today.

“Paparazzi, there, there, on the roof, I see them,” she suddenly cried.

“Where, where?” came the anxious reply from a scrum of assistants, tanned models and a bodyguard.

In the middle of it all, unruffled and with his camera trained on Campbell, was Karl Lagerfeld.

The designer was in the city — amazingly, his first time ever — for a presentation of the Paris-Moscow collection, which made its debut in Paris in December and pays tribute to Chanel’s Russian links (Coco Chanel and Grand Duke Dmitri Pavlovich were lovers). It was the first time a Chanel collection had been shown in Moscow since 1967. The Campbell shoot, for an issue of V magazine, was something Lagerfeld fit in on the side.

Visiting Moscow wasn’t only a chance for Lagerfeld to trace Chanel’s roots — it was also an opportunity to revisit his own.

In a good-humored interview before the show, Lagerfeld said that, while he’d only been in town a day, he’d already formed some strong opinions about Russians.

“I think the women are better than the men. I think if I were a woman here, I would be a lesbian,” he said sardonically, wearing dark glasses, a custom-made high-collared shirt and a Martin Margiela suit and tie.

But then, remembering whom he’d just photographed, he added: “I met only one very handsome man — that’s the boyfriend of Naomi [real estate mogul Vladislav Doronin]. He’s quite stunning. With the others, maybe I don’t have the right eye.”

Lagerfeld didn’t have a chance to do any sightseeing, not even the attractions on his hotel’s doorstep — Red Square and St. Basil’s Cathedral. But he said it didn’t really bother him.

“Moscow is a city I knew quite well without coming here because I’m an informed person — there are so many books, novels, photos, that in a way I know it….I have a feeling I know exactly what is in every museum.”

In a philosophical aside, he said he prefers to read about a place than visit it, anyway: “I like imagination and the way I think things could be, had been or should be — better than reality. You’re never disappointed by your imagination, but you can be very disappointed by reality.”

On Thursday night, he had dinner at Vogue Café, and while he said it was pleasant, he hasn’t found Russian food to his taste. He usually only eats steamed fish and grilled vegetables, he said, and Russians can’t get it right. He brought some of his staples — corn bread and a protein source — with him.

Lagerfeld also emphasized his dislike of borscht, a legacy from his father, who was involved in an export business in Russia from 1906 to 1917 and traveled frequently to Moscow and Vladivostok. After the Russian Revolution, Lagerfeld said, his father and other foreigners were forced to leave the country.

“He regretted Russia for the rest of his life. He really loved it, and so we had to eat borscht at home once a week. I cannot stand borscht, and I’ve never eaten it again,” said Lagerfeld.

Still, some good came out his father’s sudden departure. Lagerfeld pulled up his jacket sleeves to reveal silver Fabergé cuff links with a sapphire cross in the center. His father bought them in 1917 to get rid of his Russian currency.

Later, an audience that included Campbell, Doronin, dozens of wealthy Russians and the daughter of the Azeri president watched the Paris-Moscow show at the gilded Maly Theater.

“Moscow audiences are the worst in the world,” said Aisel Trudel, who runs 15 luxury stores in the capital. “But I think he definitely won them over.”