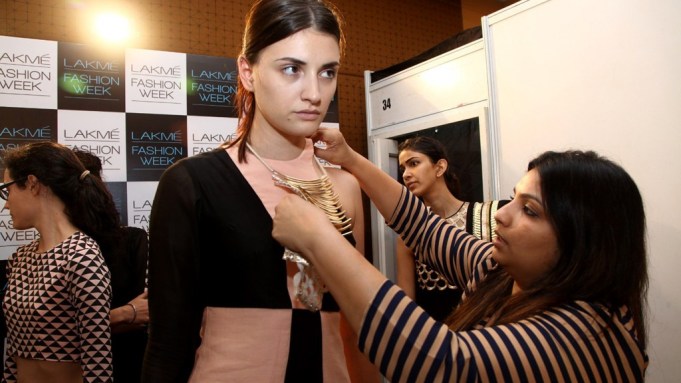 MUMBAI, India — Lakmé Fashion Week kicked off in earnest Friday at the Grand Hyatt Hotel here with a greater emphasis on design and craft.

A single show on Thursday night by Manish Malhotra, who is famous for his designs for Bollywood actors, set the tone of festivewear.

“The response we got from the last event has been so overwhelming. Our feedback was to reduce the drama and increase the fashion, and that’s just what we’re doing this time. The shows such as Rahul Mishra, Ranna Gill and Sabyasachi are testament to that. I’m very happy with the lineup,” said Saket Dhankar, head of fashion at IMG-Reliance.

He said the event would have a strong emphasis on designers who want to showcase their collections in the display areas rather than only on the runway.

There is also a strong push by two state governments to showcase their textiles — Manipur (a state in northeast India) and Maharashtra (a state in Central India). “We want to showcase weavers more this time,” he said.

There are more panel discussions this season, with a focus on how men’s wear has been evolving as well as a day devoted to Indian textiles.

“On the whole, this event is much more inclusive,” said Dhankar. “We believe there are no rules in the art world and we want that to reflect as our talent box area, which features up-and-coming designers. This area is designed by artists who have showcased this concept.”

There are 55 designers in 31 shows in the main area and 20 in the talent box, Dhankar said.

Although many of the young designers have been criticized for creating styles or using fabrics that may not be really suitable for the Indian market, LFW has largely been about experimentation. This year it is also about creating new silhouettes with an emphasis on fusion pants with movement — variations of the palazzo pant.

Manish Malhotra’s show on Thursday launched a strong festivewear collection, and he explained that his new creation was the “ghagra pant,” a blend of the sharara and the classic pant. “This new creation is a fun and very stylish alternative to the lehenga,” he said.

The sharara is a pant with a swirling expanse at the bottom and a lehenga is the long, full traditional skirt.

“I have been a part of Lakmé Fashion Week since 2004 and I have always had a wonderful experience. It is the only important platform running in Bombay as of now, and me being a Mumbai-based designer, it is the best opportunity for me to showcase my creations,” Malhotra said.

An event will mark the mentoring of 100 design protégés through the Gen Next program started in 2006.

“With each season the designers and the management strive to put up an even bigger and better show than the previous season,” said Anita Dongre, who is based in Mumbai and has developed a retail concept that has mushroomed all over India. She pointed out that LFW continues to be a premier launching pad for young designers.

“And of course the entire getting together of the fashion fraternity under one roof is always an exhilarating experience,” she said.

“The Indian fashion consumer is very strong and the designers want to tap into their own home market instead of showcasing internationally, and LFW gives the designers a platform to do so. Lakmé Fashion Week generates hours of television coverage. This provides us a great opportunity to take contemporary fashion to the doorsteps of the Indian consumers,” she said.

The emphasis at LFW in the last 10 seasons has been on current-season resortwear and designer wear, which works for local retailers who don’t often look at long lead times for stocking up and also work on a consignment basis.

“The Indian retail buyer is still very focused on the consignment model and usually wants the order within six weeks of the fashion week, which can be tricky,” said designer Payal Khandelwal.

Sabyasachi is the final show, marking a return to LFW after a gap of five years.

Industry analysts have said that repetition of designs from previous shows has been a matter of concern, and Dhankar responded frankly that he had received reports that celebrities had been seen wearing garments that had been showcased earlier, mainly in the sponsored events, and that the matter had been discussed and communicated with designers.