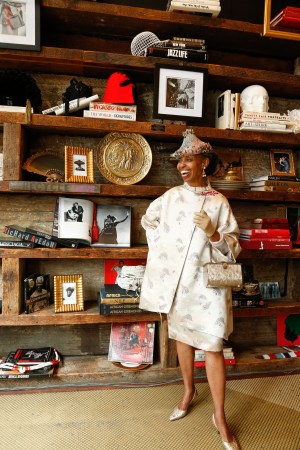 Lana Turner’s distinctive style has caught the eye of Marcus Samuelsson. Now she’s lending some of her fashion to the chef’s Red Rooster restaurant in Harlem, decorating the dining room according to her personal aesthetic. Her extensive hat collection was the starting point.

“It was Marcus, who has seen me over the years in hats and going into events,” Turner explained early one morning of the installation’s genesis. “He’s always like, ‘Oh my God, I love what you have on, I love that hat.’ And over that time he’d say ‘Oh, you know, I want to do something at the restaurant.'”

That inkling has come to fruition with her newly mounted installation. Turner, a life-long Harlem resident, estimates that she has over 500 hats in her personal collection, and around 40 were selected for the Red Rooster showcase.

Several curated installations are dispersed around the room, separated by theme: red and gold, orange, white, butterflies. The front wall includes several 3-D printed designs by Brooklyn milliner Heidi Lee; an accordion hat that looks like it was once perched atop Napoleon’s head; two formal designs by a Detroit-based milliner, and a hat that Turner herself created earlier this year for the Lunar New Year. She estimates that around one-third of the hats in her collection are vintage, and a few are sprinkled throughout the room: a topper worn by the late actress Ruby Dee hangs in the main dining room; a helmet-shaped design by Pierre Cardin is propped up next to the bar.

Turner can talk about the history and story of each item with an archivists’ precision, but she stressed that she’s not only a collector — she actually wears everything on display. And while hats are the central theme, they are accompanied by a menagerie of personal items — dresses, shoes, gloves, books, records, plates and photos — that represent her way of thinking.

“They just expected hats when they were asking about hats,” she explained. “I’m like, they don’t understand. This is my lifestyle, it’s not just clothes or just a bag or just a hat. Everything goes together.”

The showcase will be up through September, and Turner expects to rotate several items in and out. The restaurant will also feature imagery from the installation on promotional postcards dropped with restaurant checks.

“I’ve never been a fashion girl, ever. I’m still not a fashion girl,” Turner insists. “What I am is someone who understands her own style.” That day, she had come out to the restaurant donning a brocade jacket, white gloves and a pashmina, topping off the look with a vintage Sally Victor hat.

“I can be many people, and that’s the wonderful thing about hats.”