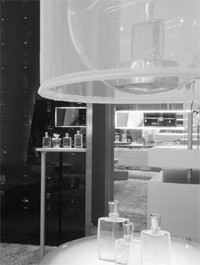 HONG KONG — The future of Lancôme is on display here today in a new freestanding store at Festival Walk.

The L’Oréal-owned brand’s 990-square-foot concept shop, which opened to the public on Thursday, is meant to exude next-generation Lancôme — from the way it looks to how it sounds and smells.

“It gives us a benchmark,” Marc Dubrule, Lancôme’s chief executive officer, explained to WWD. “We never had a real concept store before. We wanted to have a model. It will influence the look of the brand for the future.”

Through the shop’s front window, passersby can see Lancôme’s signature roses in white suspended in transparent balls. There’s also an image of a woman with a pink rose on a backdrop made of transparent and semitransparent veils through which people can view the store’s interior.

And the entrance to the boutique has been designed to evoke the feel of a hotel lobby.

But rather than serve drinks, each section has been created to provide a taste of the Lancôme universe.

Take the makeup artist bar to the right of the door. It’s backed with a wall of white fabric roses and boasts a mirror adjustable to provide nighttime- and daytime-like light.

Straight ahead are skin care and makeup bars, which aim to display a sampling of items rather than entire product lines.

Further into the boutique, the lounge area is demarcated by a plush rug and curvaceous column meant to evoke the female form. This section is also home to two Diagnôs centers.

Lancôme executives describe Diagnôs as an ultrahigh precision three-in-one evaluation tool developed by the brand’s laboratory. It allows beauty advisers to analyze skin using three cameras: one to magnify the skin’s surface and interior by 60 times (double the traditional 30 times), another to help gauge the depths of wrinkles and a third to detect skin clarity levels. The tool also measures sebum in the T- and U-zones, plus moisture and skin firmness.

Following evaluations, Lancôme beauty advisers then use Diagnôs to compare customers’ skin with healthy skin from women of the same age bracket in the same country. Diagnôs also was conceived to help educate people about skin and to aid beauty advisers in recommending individualized skin care programs.

To the lounge’s right is what Lancôme executives call a “discovery sphere,” a suspended transparent ball through which people can smell a scent. Also on the fragrance front is a wall lined with scents at the rear of the store.

Niche cabinets line the right- and left-hand sides of the boutique, with one proffering scent, three with color cosmetics, two providing skin care and one for specialty items.

And for those with facials in mind, there’s a 130-square-foot, egg-shaped treatment room.

Studio Massaud’s designer Jean-Marie Massaud and architect Daniel Pouzet were behind the streamlined look of the new concept store whose floors are paved with frosted glass and whose walls have blue highlights. Zone-to-zone lighting is de rigueur.

For ambiance, Lancôme turned to musical design agency Sixième Son, which developed six themed pieces for the store. “Creativity” and “Femininity” are two of the piped offerings that are played in different parts of the boutiques.

“[They were] created like a musical platform with brand values,” explained Bartau.

“The idea was to control the sound so as to be sure we have a Lancôme atmosphere,” added Dubrule.

“It will be sprayed lightly,” said Dubrule of the fragrance. “The [scent] must be able to mix with other fragrances.”

While Lancôme executives refused to divulge numbers, industry sources estimate the new store could generate $167,500 (1.3 million Hong Kong dollars) a month within the first year. That’s more than 60 percent higher than the sum rung up at the previous Lancôme shop at the same spot.

Freestanding stores are not new to Lancôme, which already has 15 of them in Eastern Europe and Asia. Dubrule said such shops are strategic in areas where the brand has no existing distribution.

Lancôme currently generates about 15 percent of its business in Asia, where it has posted double-digit growth for many years.

The brand’s new concept store — expected to be followed by as many as nine further openings in Asia through 2005 — is meant to provide a template for Lancôme. The layout can be adapted to other types of spaces and locales, while elements of the new concept can ultimately be put in place by existing department stores and perfumeries carrying the brand, explained Lancôme executives.

The goal is to create coherency between the new concept store and Lancôme’s global image.