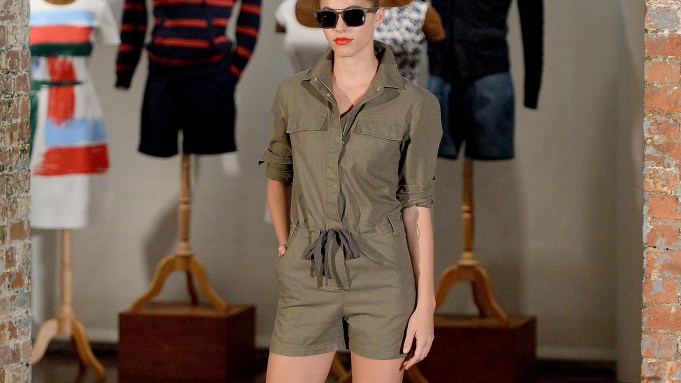 Lands’ End’s president and ceo Federica Marchionni hasn’t been shy about her ambitious plans for the company. Since she joined the brand in February from Dolce & Gabbana, where she was the U.S. president, she has made herself and her plans to engage a new, younger customer while retaining loyalists, very public.

On Thursday, Lands’ End hosted a dinner and fashion show in New York City for its spring collection. “What I’m trying to do is to evolve this company into a meaningful global lifestyle brand,” said Marchionni, introducing the collection. “People love Lands’ End. I feel such a huge responsibility to ensure that they will keep loving Lands’ End, but I also think that there are new customers that need to be integrated into our family.”

To her point, many of the looks in the women’s and men’s lineup felt fresher and more relevant than the brand’s traditional image, yet they were within the Lands’ End vocabulary of wholesome, heartland attire. Despite its global ambitions, Lands’ End is an American brand to its core, a point hammered home by the red, white and blue color scheme and stars-and-stripes motifs. Silhouettes captured a benign polish. For example, a short, neat navy shift was styled with chunky necklaces and sunglasses. A navy and white maxi sundress had sporty, tank shoulders and clean lines. Several looks were finished with navy sash waistlines. Swim and beachwear, a big category for Lands’ End, was a strong example of Marchionni’s plans. Surf-inspired rash guard tops and a utilitarian romper felt appropriately daring for the line.