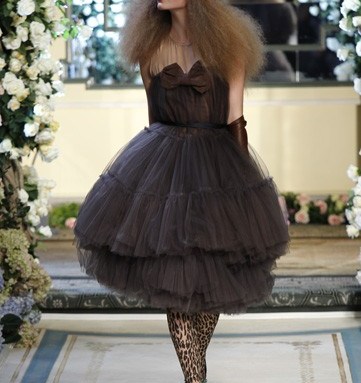 After a month-long publicity tour, during which Alber Elbaz made all the right stops and said all the right things, the hype surrounding the Lanvin (Hearts) H&M collection has been tremendous, more so than any other high-low fusion in recent memory. The fashion press has behaved as though the collaboration (in stores Saturday) was the first of its kind when, in fact, this was the latest in an ongoing series that began six years ago with Karl Lagerfeld, though the Lanvin clothes are on average the most expensive of H&M’s designer endeavors. And the fashion show staged Thursday night lived up to all the great expectations.

The Lanvin team took over the Pierre, New York’s Frenchiest hotel, and set it up like a 1920s club with giant palm fronds and caged parakeets. The ballroom’s ceiling was strung with 20 crystal chandeliers, a Cuban jazz band played, and a rose-and-peony arch set with fluorescent lights that spelled out “Lanvin Hearts H&M” was situated at the end of the runway — everything was brought in by Bureau Betak production specially for the occasion. If it seemed over-the-top, the spectacle was par for the course, according to an H&M spokesperson.

The atmosphere was that of a major event with many attendees turned out in proper party attire, fanciful headgear included. Editors were joined by New York designers, including Tory Burch (who was wearing one of the faux furs from the collection and really had no reason not to attend since she lives upstairs) and Anna Sui. “Anna told me she was coming and it sounded like fun,” said Sofia Coppola who arrived with Sui.

Alexander Wang was seated beside Elisa Sednaoui; Elettra Wiedemann, next to Patrick Demarchelier and Andie MacDowell, in a Lanvin for H&M jacket, who was in town visiting her daughter Rainey Qualley. “I’m the Lanvin customer and she’s the H&M customer,” said MacDowell. Emma Roberts was across the runway.

The show, as Elbaz has explained in countless interviews, was intended as an ode to haute couture and, indeed, the designs were a cut above what’s typically found in such projects. Styled by Katie Grand, the looks came as a wild mix of printed hosiery, big hair and dresses and jackets from the collection, some of which were one-offs being auctioned for UNICEF. The directive was clear: Runway-as-theater, as top models, such as Siri Tollerød, Heidi Mount and Lindsey Wixon, camped it up alongside novelty types like Dree Hemingway, Pixie Geldof, Asia Chow, and the Italian fashion editor of Japanese Vogue Anna Dello Russo, who walked with a gray standard poodle. Afterward Elbaz summed up the exercise as “a silly thing but it was a happy thing.”

That’s one way of describing the post-show scene downstairs, where the audience was invited to shop the men’s and women’s collections according to time slot, a system that resulted in retail melee and a one-in-one-out door policy. “I feel like a groupie,” said one socialite who had yet to be granted entree 30 minutes after her scheduled time. “This is embarrassing.” And yet she waited for at least another ten minutes, as socials, editors and Russian clients — many of whom quite obviously wearing real Lanvin — emerged with purchases by the armful.