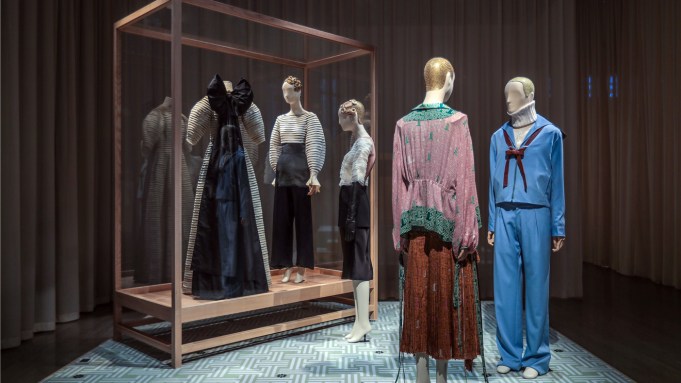 SHANGHAI — Lanvin is stepping firmly back into the spotlight.

After some troubled years in which the luxury label saw upheaval on both its creative and business ends, the French house is celebrating its 130th birthday in style. With the backing of new Chinese owner Fosun International, it debuted a large exhibition here on Friday at the Fosun Foundation in a major weekend for the house that also feted a new flagship store and release of a capsule collection.

The exhibition, titled “Dialogues,” is open to the public until Feb. 9, and presents 75 pieces from the Lanvin archives dating from the house’s founding in 1889 to the present day. It’s also the first such event put on by the brand that highlights not just founder Jeanne Lanvin’s work but its creative directors through time, from Alber Elbaz to current designer Bruno Sialelli, who was installed last January. Highlights include the wedding gown of the founder’s daughter, Marguerite Lanvin, and the costumes of various stage and film actors the house clothed, some of which are being presented for the first time to the public.

While many brands present exhibitions in pure chronological fashion, curator Judith Clark wanted the outfits from Lanvin’s different designer eras to sit beside one another in a thematic scheme, and the installations draw out the recurrence of house codes throughout the decades.

“Bows are very important to Lanvin,” Clark said. “Ribbons, long extended ribbons on her gowns and in Bruno’s work. But also the kind of Art Deco geometry printed on the garments and creeping into the accessories.”

The color blue has special significance to the brand. “Lanvin loved blue and so she would look at paintings and copy the exact pigment of the blues she found often in Renaissance paintings,” Clark added. “That blue has evolved over the years as the packaging of Lanvin.”

The show highlights Lanvin’s work dressing entertainers, which is a lesser known detail of the house’s history. “She was very active making costumes for theater and films,” Clark pointed out. “Now everybody is obsessed with celebrities but she was doing the same thing. She was providing clothing for actors and actresses before people turned that into a fundamental practice. She knew the marketing power of that.”

Also debuting is a new flagship Lanvin store at BFC, the luxury shopping complex, which sits directly opposite the exhibition space. A month prior, the brand had opened a new location in Hong Kong’s K11 Musea mall.

Simultaneously, Lanvin is releasing a special-edition capsule totaling 200 garments and 120 accessories. This includes reproductions of archival styles, such as three outfits that were signed by the founder, items from the Winter 1920, Summer 1927 and Summer 1936 collections. Each of these garments will be accompanied by its numbered card, as well as photographs of the patterns and original designs.

Sialelli has also created new designs in a limited run, resurrecting features such as Asian-themed printed designs from the Twenties, the golden stopper from the brand’s fragrance Arpège, and an angel sketch Lanvin herself did in the Thirties. The collection is available in six physical stores exclusively in China and via WeChat, although global customers may access it through lanvin.com.