BEAT: As the newest member of the Koral Industries family, LaROK is making its mark with a spring collection that hit stores this month. 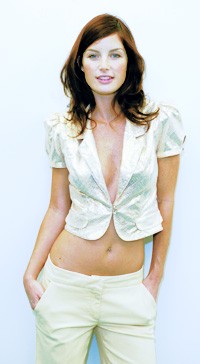 NEW YORK — Seven For All Mankind has a sexy sidekick.

As the newest member of the Koral Industries family, LaROK, the contemporary line that launched in May, is making its mark with a spring collection shipped to stores earlier this month.

Sex appeal appears to be a running theme throughout the line: Fabrics hug at all the right places and are sometimes sheer, sometimes latex. According to Slattery, the LaROK customer is someone who sets trends, not follows them. “Our consumer follows fashion, but is not a fashion victim,” said Slattery. “She’ll combine the elements of the season with, say, her grandmother’s charm bracelet.”

The key pieces in the spring collection include cropped cap-sleeve jackets, braided halter tops with seashells and dressed-up boardshorts.

The spring collection, available at specialty boutiques and select department stores nationwide, is bursting with colors like seafoam, bronze and coral, while hints of neon are sprinkled throughout. There are a few key denim pieces, though Slattery admits the company’s older sibling, Seven For All Mankind, has the upper hand in that category.

“We’re introducing pieces we think our girl needs, but there are a lot of denim companies out there doing it and doing it very well,” she said.

Big Drop in New York has already sold out of its LaROK stock and reordered spring items, which arrived earlier this month. “The whole collection is doing really well, but the tops, specifically, are doing great,” said Emily Chen, buyer at Big Drop. “It’s different from everything else out there. It’s really clean and fits very well.”

The line is seeing the same success in L.A. “We sold out of our total stock, 50 units, in just two days,” said Kitson owner Fraser Ross. “Their items are perfect: They make a young person look chic and an old person look hip. And the price point is just amazing. I don’t know how they do it.”

LaROK’s wholesale prices range between $44 and $112. The company expects its wholesale volume to reach $10 million in 2005.

La Fata, who’s been with LaROK since its conception in late 2003, received her design training at Daryl K, Katayone Adeli and Jill Stuart. “Because of my background, I’m particularly concerned with the fit of pants,” La Fata said. “It’s important for me to use authentic details and new, forward fabrics. It’s all about getting the perfect fit,” she added, eyeing a pair of flat-front trousers in an eye-catching orange-y carotene.

“LaROK” is written inside the waistband of the pants in retro bronze script. “I think everything we’re doing can be seen as fresh, but familiar,” La Fata said.

And what about that name? To hear Slattery tell it, it couldn’t be more apropos to what the company is hoping to achieve.

“We wanted a name that said what we were, which is a mix of hard and soft looks,” she said. “It also happens to be ‘Koral’ spelled backward.” And if that weren’t enough, Slattery added, “It also resembles Jenny’s [La Fata] last name, so it’s really just perfect.”