Latex Squeaks Onto the Cultural Radar

Kim Kardashian squeaked into rubbery Balmain right off the runway.

The coronavirus crisis seems not to have dimmed curiosity about what it’s like to wear latex, one of the more offbeat trends of the fall 2020 fashion season.

A video of Kim Kardashian, with two helpers, wedging her voluptuous curves into a snug, caramel-colored ensemble from Balmain has racked up close to 2 million views on YouTube alone since it debuted earlier this week — also spawning scores of cheeky memes. She famously wore that look during the last Paris Fashion Week to attend Sunday Service, one of her husband Kanye West’s peripatetic gospel gatherings. 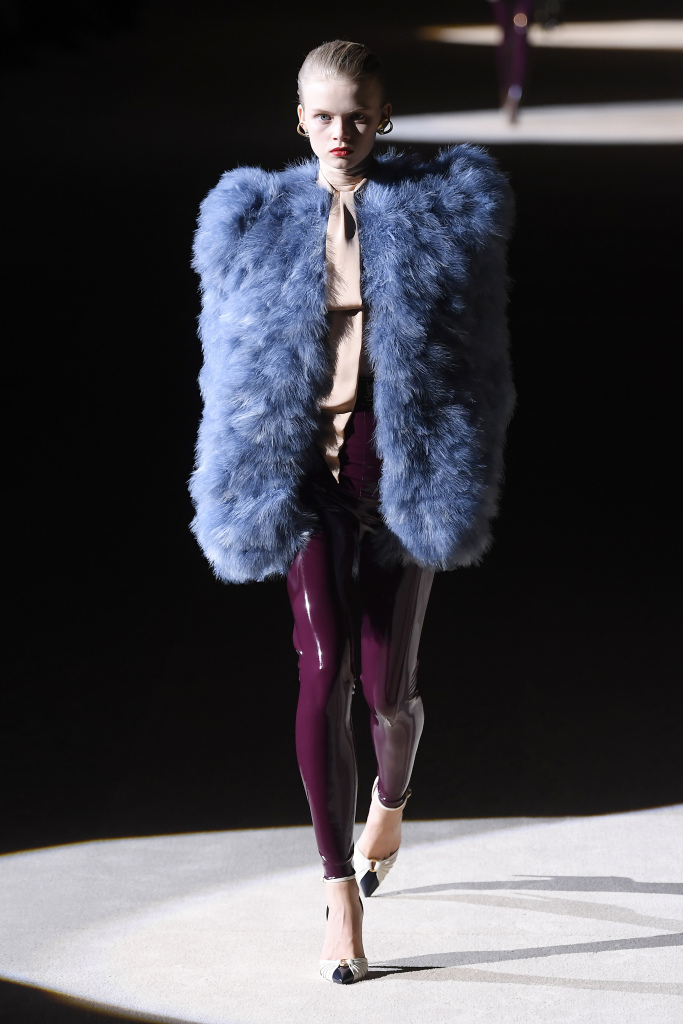 Valerie Steele, director and chief curator of The Museum at the Fashion Institute of Technology, said she’s not surprised so many designers dabbled with the slick, stretchy stuff.

“It’s clearly a fetish fabric and anything that has to do with deviance is powerfully charismatic, and fashion people are naturally drawn to that,” she said in an interview, playing down any prescience related to the coronavirus pandemic.

Given latex’s medical connotations, some online commentators saw Kardashian’s encasement, right down to her fingertips, as shielding her from the deadly virus that had begun its spread in Europe at the tail end of fashion month.

“I think it’s just coincidental,” Steele said. “I guess you could say this look of hard, wet impenetrability signifies a kind of safe sex, or cyber sex, which is of course another way to maintain social distance. Latex seems to be acting like a body armor, to keep disease out.”

“It is now doubly strange that so much latex was showing everywhere, especially in Paris, just at the moment that the coronavirus pandemic started,” commented London-based Atsuko Kudo, who bills herself as a “couture latex designer” and helps many top fashion labels use the material.

She noted that the fall collections were in development at the end of 2019. “So either it is coincidence or serendipity or a portent of things to come,” she mused. “As is often the case, fashion sometimes reflects and sometimes predicts the time and state of the world around it.”

To be sure, the material has appeared on many designer runways in recent seasons, from Richard Quinn in London to Givenchy in Paris, where Claire Waight Keller sexed up her spring 2019 couture collection with latex, calling it “the most bespoke fabric in terms of getting that second-skin feeling.” (Rachel Weisz famously donned a red and rubbery Givenchy look to the 2019 Oscars.)

“You tend to see designers who are into very edgy fashion or sexy fashions using it. You wouldn’t see a Ladies-Who-Lunch designer doing that,” Steele noted. “Leather has become a little bit of old hat, so latex is a material that seems more extreme.” 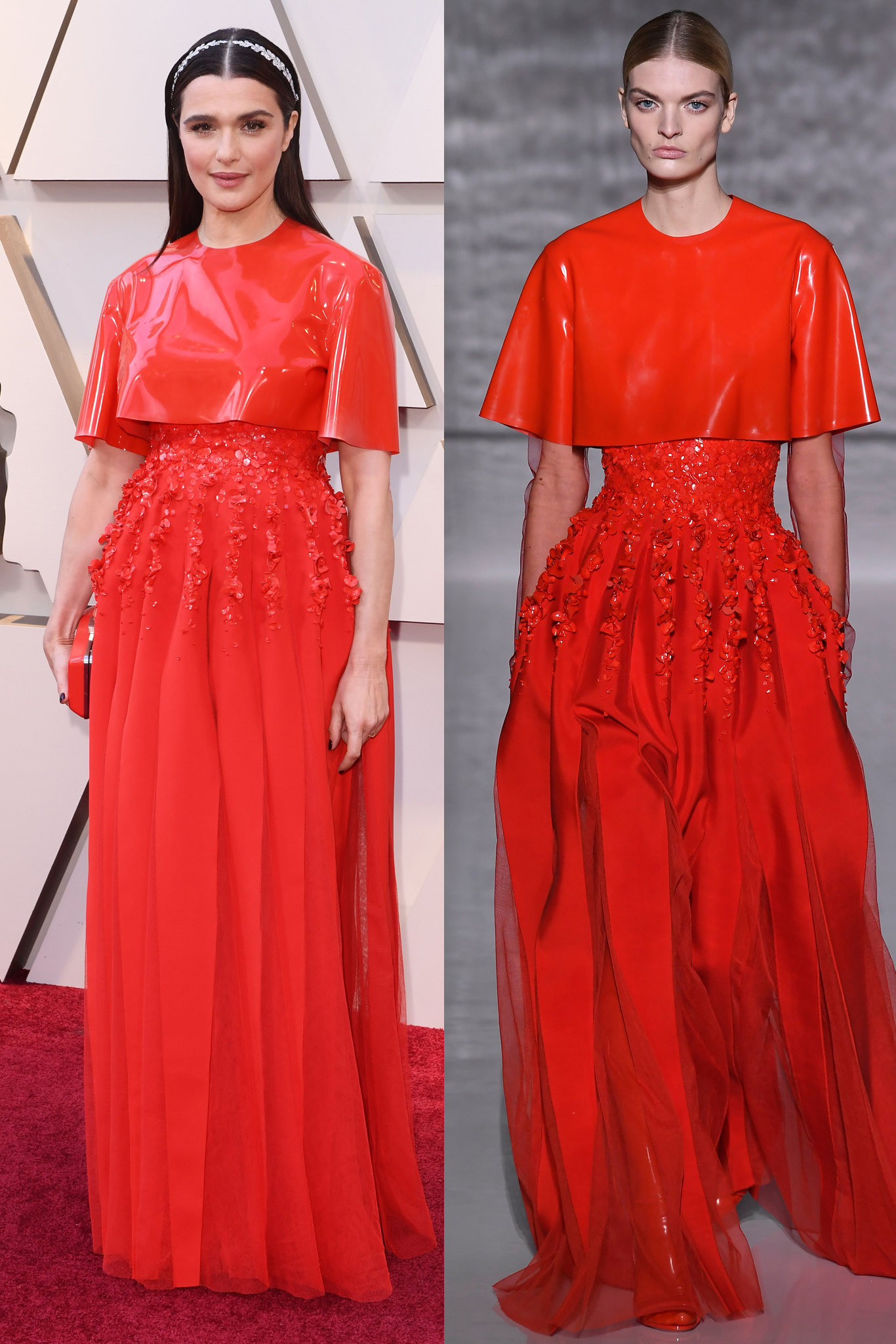 Rachel Weisz in Givenchy Couture spring 2019, and the look on the runway.  Shutterstock/WWD

Kudo was conscripted by Anthony Vaccarello at Saint Laurent and Balmain’s Olivier Rousteing to help realize their complicated latex looks, given the material’s unusual qualities and her expertise and advanced techniques to tame it. She has also worked with Jean Paul Gaultier and Vivienne Westwood, whom she hails as a pioneer.

“Vivienne was the very first major fashion designer anywhere in the world to use latex, of course, and was completely central to bringing the fabric into the world of fashion. She was using latex in the Seventies before most of today’s designers were born,” she marveled.

Latex was something of a footnote in Rousteing’s expansive fall collection for Balmain, but has already prompted a media heyday, thanks to early adopter Kardashian.

“I used it in a different way,” the designer said in a recent interview. “It was a protective moment. I was thinking about protective glamour. It was using a material that could look really glamorous in the future.”

He acknowledged that latex is a troublesome material to shoehorn into a tailored silhouette, describing it as labor-intensive as embroideries.

“It’s not easy to drape at all,” he said. “Also, with this material, you need to put lube to get into it because latex can break.”

Despite eye-watering prices, with Kardashian’s ensemble retailing for 18,990 euros, “we got many orders. I’m really impressed,” Rousteing marveled. “That shows you that the consumer more and more goes for something more creative and unexpected.” 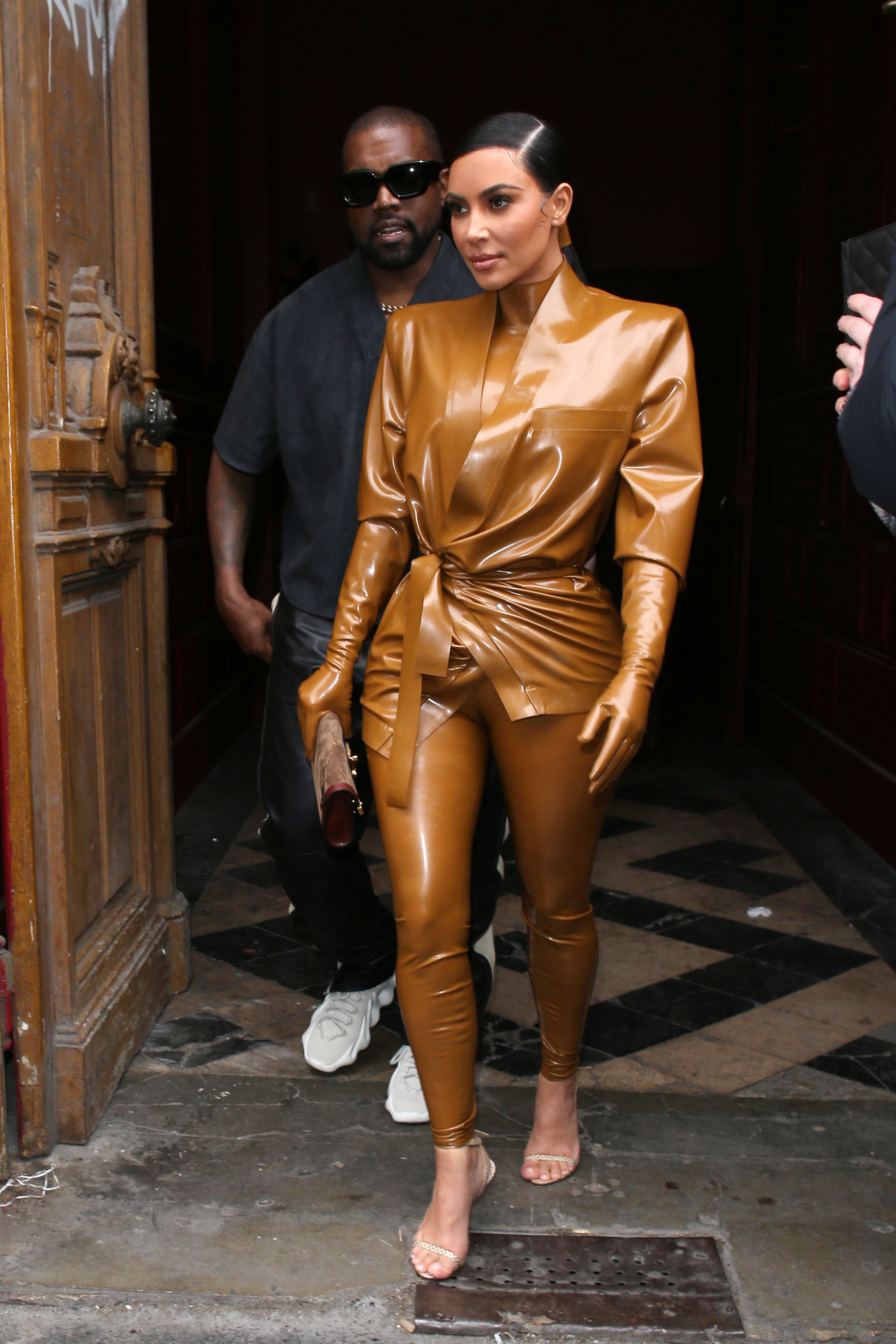 Kudo recommends anyone curious about latex splurges on a designer who cuts it well and knows his or her sizing. “Of course it is not a practical fabric to wear — in fact it is the opposite of practical,” she said. “So maybe that is a downside — but I don’t see the downside!

“No other fabric is so photogenic and this helps to make you feel even more special,” she enthused. “The super glossy shine and feeling of a second skin is very seductive.”

There is another virtue in latex very far from the bedroom — or dungeon. “Rubber trees are a plantation crop and so in that sense — unlike plastic or PVC — it is sustainable,” Kudo said. “It is highly unusual in that it comes as a milky liquid when the bark of rubber trees is cut open. So in a way it is a material which is literally the milk of the earth.”

Asked if he has ever worn Latex, Rousteing replied briskly with a chuckle: “Absolutely not!” Yet, he said models at his fashion show clamored to wear the rubbery items. “Of course you feel so powerful in that look,” he enthused.

Steele also said she was never tempted. “I’ve never worn latex but it’s said to be hot, and tight and it also is also highly flammable,” she said.

To wit, she recalled a book signing party at Waterstones in England when she launched her book, “Fetish: Fashion, Sex and Power,” and the staff wore latex in her honor. “And they were all smoking because you could still smoke in bookstores back in the Nineties in London. I was like, ‘Whoa, people don’t do that, you could set yourselves on fire.’”

In her book, Steele notes that latex, leather, torn clothing, motorcycle jackets — they’re all signposts of rebellion and deviance, which often appear in advertising, as such associations help sell products.

“If the fashion industry has increasingly drawn on fetishistic themes, this is one important reason why,” she wrote.