Designers snap up two prizes at fashion and photography event. 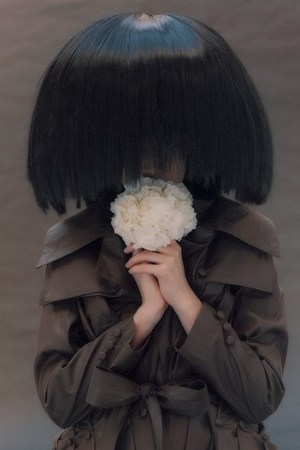 PARIS – With a unisex collection inspired by film noir characters all wearing giant wigs, Latvian duo Marite Mastina and Rolands Peterkops swept two of the main prizes at the 24th International Festival of Fashion and Photography, held in Hyères in the south of France over the weekend.

The jury, presided by Belgian designer Kris Van Assche, alongside film director Zoe Cassavetes and photographer Nan Goldin, picked the two designers from among nine other competitors during the three-day event, which in the past has catapulted such designers including Viktor & Rolf on to the international stage.

Mastina and Peterkops, who both graduated from the Latvian Academy of Arts going on to work under the label Mareunrols, won the top L’Oréal Professionnel-sponsored prize of 15,000 euros, or $19,870, which includes using L’Oréal’s Rue Royale Academy for a runway show. They also won the French fashion chain 1.2.3.’s prize of 15,000 euros, or $19,870, together with the opportunity to design a collection to be produced and sold at the retailer.

All 11 competitors will have the chance to create their own fabric free of charge, thanks to Italian manufacturer Punto Seta, while all can also pick Swarovski crystals to use in their next collections.

The main prize for photography went to Switzerland’s Linus Bill.

As well as backing emerging talent, the festival showcased work by such industry veterans as Steven Meisel, who displayed 20 years of his cover shoots for Italian Vogue and Peter Knapp, who was art director at Elle in the Sixties.