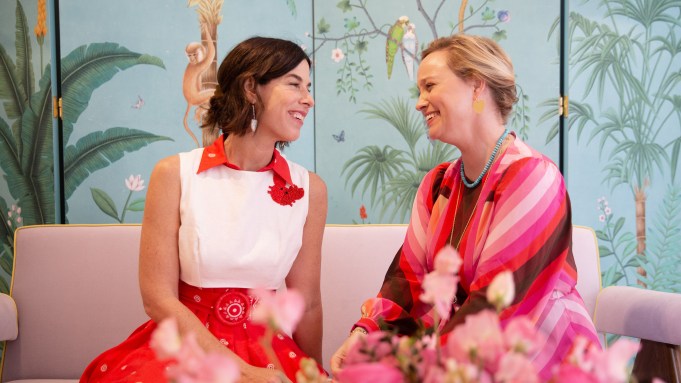 The owner of the Charlotte, N.C., boutique Capitol has opened a 3,500-square-foot store at the Brentwood Country Mart in Los Angeles, with a little sparkle from a friend, jewelry designer Irene Neuwirth, who provided her own shop-in-shop.

“My second largest client base is California and I’ve always loved the Country Mart,” said Poole, sitting down with WWD on opening day, in front of the store’s brilliant blue de Gournay screen. “It’s her second largest client base because I’m buying all of it,” deadpanned Neuwirth, proving her point by wearing her most recent purchase from the day before, a linen dress decorated with whimsical red crabs by Turkish designer Gül Hürgel.

Established in Charlotte in 1997, Capitol’s flagship is one of the South’s leading multibrand boutiques, which in recent years has expanded locally to include the contemporary Poole shop and Tabor shop for men. The Venice, Calif.-based Neuwirth, whose jewelry is beloved by Reese Witherspoon, Jennifer Lawrence, Emma Stone, Julia Louis-Dreyfus, Busy Philipps and more for its carefully balanced constructions of bold, rough cut and semiprecious stones, has been selling at Capitol for 17 years. She and Poole became fast friends when Neuwirth wandered across the street after doing a trunk show at a rival store — for the last time — before she became a Capitol convert.

It was a match made in fashion heaven that would eventually find its way to the West Coast.

With her quirky-feminine style and earthy-elegant jewels, Neuwirth has emerged in recent years as an L.A. style icon, appearing often in the glossy pages of magazines, and on the occasional red carpet with her boyfriend, “Spider-Verse” writer-producer Phil Lord. With her collection already stocked at Barneys New York, Marissa Collection and Capitol, among others, she upped the retail game in L.A. in 2014 when she opened her own Melrose Place boutique, a whimsical wonderland of at-home L.A. ease she says was inspired by Capitol’s Southern hospitality, impressive courtyard and living wall created by French botanist Patrick Blanc.

“The customer service and attention to detail, it’s part of the reason I opened my own store,” Neuwirth said. “I wanted to bring something that feels like that to LA., where people can come in and have a glass of wine, or come over for dinner.”

While she never anticipated opening a second location, when Country Mart owner James Rosenfield came to her with the idea of partnering with Poole, she couldn’t refuse.

“My dad lived in Westwood when I was growing up, and we’d ride our bikes here every Sunday to have a chicken basket,” she said, name-checking the Country Mart’s nostalgic food stand Reddi Chick.

“A lot of things we have are exclusives because we’re the only ones who buy it in pink!” said Poole, dressed in a rainbow bright stripe Valentino dress, explaining that the assortment for L.A. includes about 60 percent of the labels represented in her Charlotte stores.

The L.A. outpost came together in a matter of months. “I didn’t sign the lease until October,” said the retailer, whose husband Perry Poole designed the SoCal sun-filled space, which boasts a perfume corner featuring exclusive A Flower scents by Lyn Harris. She’s planning an opening party next month with Neuwirth and the designers from Peter Pilotto.

For her shop-in-shop, Neuwirth turned to L.A. interior designer Pam Shamshiri, who created her Melrose Place store, and L.A. artist Clare Crespo, who filled a glass case with a diorama of birds, branches, flowers and butterflies fashioned out of cashmere, snakeskin and suede to display the designer’s one-of-a-kind necklaces and earrings made from opals, moonstones and tourmalines. For the opening, Neuwirth created her first hair accessories, including clips with carved flowers of turquoise, green opal and pearls, which start at $1,400.

“Irene’s jewelry changed my whole business, because she introduced this idea of women buying jewelry for themselves. That wasn’t a concept that people had, especially in my growing up,” said Poole, who has a second home in Santa Monica, Calif., and plans to regularly visit the Brentwood outpost, which shares space with Goop, Sid Mashburn and several other first-to-market stores.

In part because of the Country Mart’s roster of names, Poole is bullish on the future of brick-and-mortar. “I love fashion, but I really love people, it’s really about connecting with people for me, making them feel prettier, taller, all the things you want to feel, you can do that with clothes and jewelry,” she said. Still, this second store is not a signal that she’s in brand expansion mode. “A lot of our client base is here,” Poole said. “But I don’t think you step and repeat it.”